An Appreciation of Waylon Jennings

So how would you feel? It’s 1958. You’re 21 years old, spinning wax at a two-bit radio station in the middle of West Texas, just happy to be out of the cotton patch and not knowing nothing about nothing but Ernest Tubb, Pepsi-Colas, drive-in movies, and Moon Pies. That’s you, and one day your good friend, who is also your mentor and role model, who also sees a lot more in you than you see in yourself, waltzes into the booth at the radio station, tosses you an electric bass guitar, and tells you to learn how to play it. He’s taking you on a rock and roll tour, starting next month, January of 1959. A week later, your friend flies you to New York City and puts you up in his Greenwich Village apartment. You sleep on the couch, learn the bass, rehearse with the band, and explore Manhattan. The two of you have your picture made in a Grand Central photo booth. Then you climb on the bus, and in a wink, you’re crisscrossing the frozen Midwest in the dead of winter with a bunch of one-hit wonders, playing rock and roll shows in high school auditoriums and basketball gyms.

By the end of January you’ve played twenty shows. Your friend has decided to take you to London as his opening act, which is nice, but that’s a few weeks away, and right now it’s forty below in Duluth and the heat on the bus is out. The tour moves from Duluth to Clear Lake, Iowa, and nobody has any more clean clothes. West Texas boys (on account of their dirty minds) require clean clothing, so your friend charters a plane from Clear Lake to Fargo so you can all find a laundromat before the next night’s show. After the gig in Clear Lake, however, you and the guitar player get wangled out of your seats on the plane.

“You’re not going with me tonight?” your friend asks. “Chicken out?”
You say no, that the Bopper wanted to fly.
“Well, I hope your damned bus freezes up again,” your friend says.
“Well, I hope your ol’ plane crashes,” you say, and, of course, it does.
Your friend is dead, slammed into a frozen wheat field, and you are sitting in a Minnesota truck stop, staring out at the frozen morning, realizing that, just for a minute there, you were sort of about to feel free. Then you feel bad about even thinking that. You’re nothing now in the middle of snowy nowhere, and the promoters don’t want the band to go home. They offer to fly you to your friend’s funeral, first-class. They offer you more money if you’ll stay on the tour. What decides it, though, is that you are a West Texas boy, a bad-weather cowboy, and a man of your word. So, like a fool, you stay, but you get no tickets, first-class or coach. You get no money, and at the end of the tour, in a daze, you go home. You’ve got no friend and you’ve got no future. How do you feel?
Well, first, you’re extremely angry, and second, you don’t care anymore. About some things (like businessmen, lawyers, and bourgeois respectability), you will never care again. You’ve just been awarded a thirty-day doctorate in the music industry, so, from Jump Street, you trust no one except out of laziness and make few friends because, somehow, it seems, you kill your friends, and anyway, you are too far gone for any but the farthest out. From now on you will sit a long way back from the screen and see yourself acting out the roles that life requires of you—son, friend, lover, husband, music star, culture hero—but you will never take any of them very seriously.
You’re plenty screwed up, in other words, and if you had a shrink, if anybody in West Texas had ever heard of a shrink, he would probably diagnose a permanent case of low-grade depression, dissociation, and survivor’s guilt, along with a heavy dose of the old And Suddenly syndrome. He would probably prescribe the pills you’re taking anyway, because at this point, you are morally certain that the better things get, the more likely they are to blow up in your face; that the brighter the sun, the softer the woman, the sweeter the song, the darker the oncoming storm. The future closes like a shutter in these moments, so you live in the music, which has its own time. You can strip it down, tighten it up, clean it off, and ride it like a rising wave. The music, in the moment of its making, sets you free, but it doesn’t cure anything—and, really, it never will. 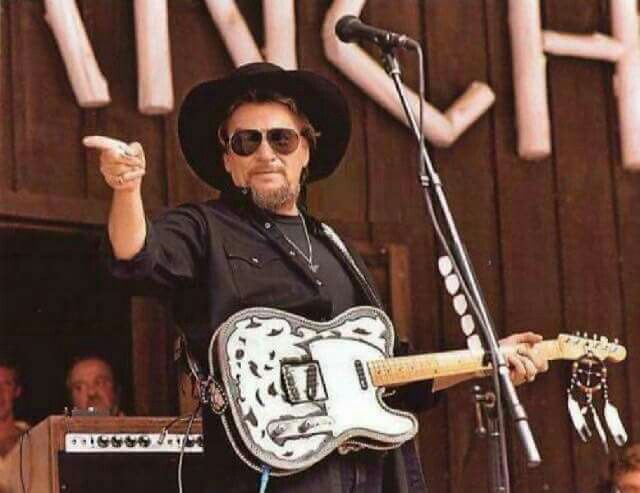 AND WAYLON SURVIVES AS WELL, on his records, of course, but most profoundly in the memory of fading gypsies like those who gathered in Lubbock, who never saw bad done so well. This is the picture of Waylon that I carry with me today: We are milling around the crowded greenroom after a show in Atlanta. Waylon is flopped down in the middle of a leather couch, flanked by two exquisitely coiffed, extremely plump white ladies. The ladies are attired in pastel pantsuits, and the three of them make a nice tableau—the gaunt King of Darkness bracketed by two painted and powdered Easter eggs. Waylon sits forward with his elbows on his knees, grinning and soaked with sweat. His hair hangs in wet, greasy ropes, some of it plastered across his forehead. His shirt is stuck to his body, and his wristband is stained with dark blotches. He sinks heavily into the pillows of the couch while the fat ladies seem to float weightlessly. I am imagining the strain the ladies are putting on their knees, trying not to look heavy, when I realize that, at that moment, they are not heavy at all. They are in heaven.
I sit down on the arm of the couch and find the three of them in a deep discussion about the almost insurmountable difficulty of running a beauty salon in Atlanta, Georgia, what with taxes, zoning, sorry help, and the burgeoning complexities of interracial hairstyling. Waylon is contributing what he can, which is more than I would have expected. His limited experience of beauty salons, I surmise, has been considerably enhanced by his wide experience with beauticians. Also, Waylon is a small businessman himself. As he points out, he started off as a very small businessman, picking Texas cotton and getting paid by the pound. The ladies chatter away, giddy but perfectly at ease. They are telling this dangerous outlaw things they have never told anyone, but they are not complaining, as they are wont to do, because Waylon is not a complainer and he is contagious.
Whatever they expected as they tiptoed backstage, it was never this! They are having a conversation with Waylon Jennings! It’s better than the sex they fantasized about and thought they wanted but didn’t really. Waylon knows this. He knows that, as a culture, beauty-salon ladies are incurably romantic and less worldly than they like to pretend. They are not prudes, exactly. They will have sex with you if they must, but what they want is Scarlett and Ashley. They want the rituals of courtly flirtation, and Waylon, with his devil smile and attentive gaze, is giving them that. It occurs to me, as I blatantly eavesdrop, that Waylon is selling a hell of a lot of records with this little gesture. Then I feel bad for having thought it, because Waylon Jennings, in that moment, is clearly happy as hell to be chatting with the fat ladies, behaving like the perfect young cowboy, being thoughtful and curious and whimsically generous, living in the love of the common people.
Posted by jtf at 6:27 AM