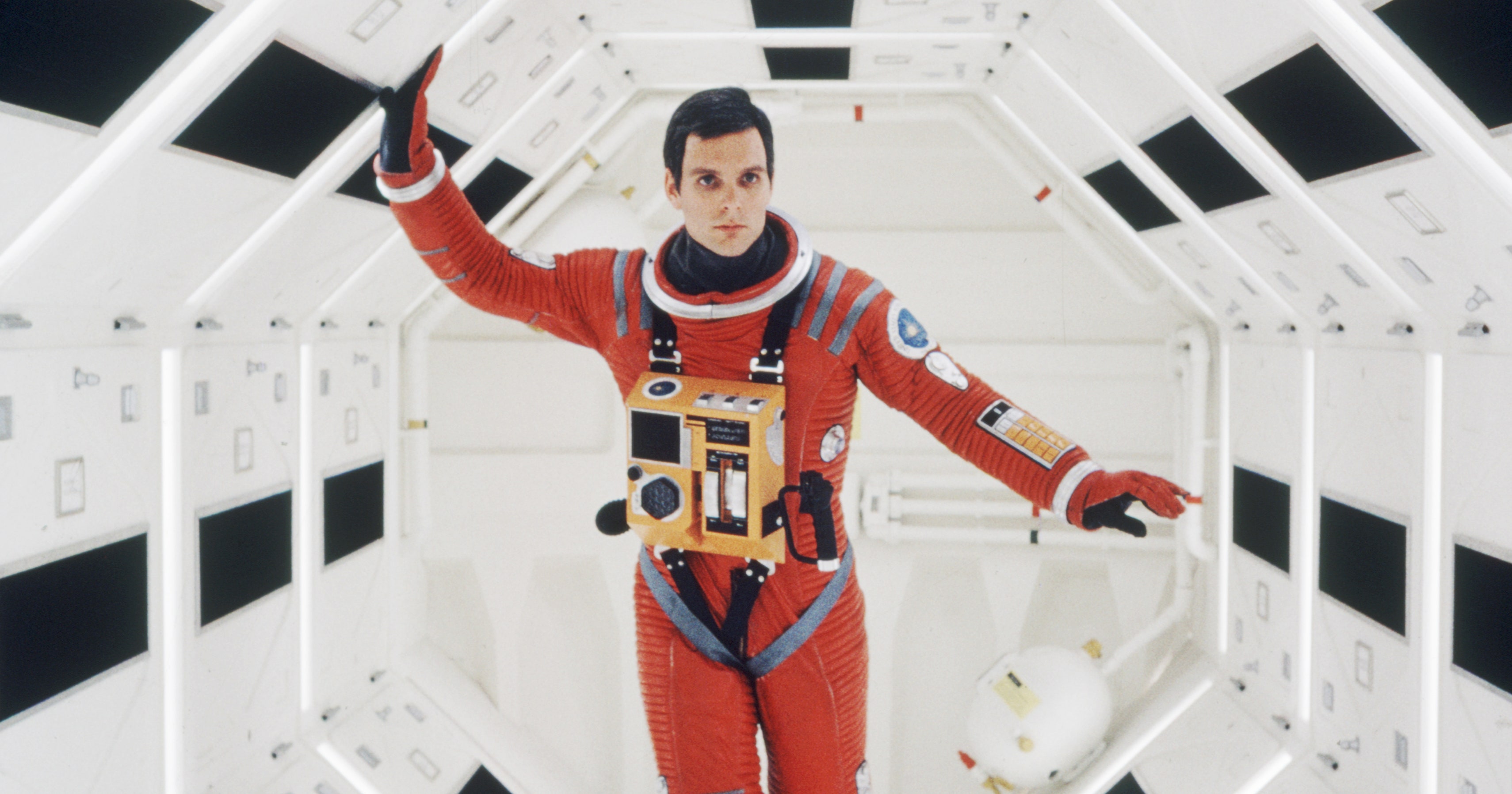 Among the classic Hollywood films, none is an outlier in so many ways as Stanley Kubrick’s 2001: A Space Odyssey. It has no spoken dialogue in its first 20 minutes, or its last 20. What words that do get spoken are rigorously banal; virtually every line is as meaningful as instructions in a technical manual. Not only does it have a nondescript hero, but there also isn’t a single interesting person in it. The only emotional moment is the death of a homicidal computer.
These are idiosyncrasies, not flaws, but the film has those as well. Notably, Kubrick’s longueurs make it so much longer than necessary that it can be trying to sit through. And the entire weight of the narrative hangs on its concluding moments, yet what they reveal is inscrutable.
I’ll warn that spoilers follow, but in the form of a rebuke: As the film marks the 50th anniversary of its release this week, if you haven’t seen it yet, you simply can’t count yourself among those interested in the possibilities of cinema. 2001 deserves such gestures of veneration as its current spot on the most recent (2012) Sight & Sound survey of the world’s greatest films: It stands at No. 6, and it’s the only film in the top ten that was released in the last 59 years.
Yet it’s completely understandable why the 1960s movie star Rock Hudson stormed out of its Los Angeles premiere, asking, “Will somebody tell me what the hell this movie is about?” With few exceptions, a film should conclude in such a way that a reasonable intelligent person will be able to at least discern what has happened. Kubrick’s story does have a defined endpoint (unlike one of those David Lynch visions that’s meant to mirror the frazzled logic of the nightmare), but he simply leaves the audience to puzzle out what it is.
As awe-inspiring as 2001 is in its own terms, it’s only when you measure it against its peers that you can appreciate how much Kubrick achieved. Space-travel TV series such as Lost in Space and Star Trek, and films such as The Day the Earth Stood Still and Planet of the Apes, occasionally dabbled in weighty themes (The Day the Earth Stood Still is a Christ allegory). But in form these shows were schlock, bedeviled by shoddy visual effects, corny sets, silly costumes, and stiff acting. All of this stamped the sci-fi genre as essentially juvenile and unserious. Kubrick’s determination to create a plausible documentary-tinged simulacrum of space exploration — the only Oscar he ever won was for the visual effects he helped create for the film — was the predicate for the film’s thematic depth. The word “breakthrough” feels insufficient. 2001 was more of a leap — as if from the stagecoach to the Tesla.
Its pace, however, is confounding, starting with the opening Dawn of Man sequence, set 4 million years ago among tribes of proto-humans who are enlightened by the appearance of a mysterious extraterrestrial monolith that teaches them to use bones as tools. At 15 minutes, the scene drags. It could make all its points effectively in a third of that time. Likewise, the scenes set in 1999 dawdle. For 20 minutes, we’re bogged down with a character of no importance, moon visitor Dr. Heywood Floyd (William Sylvester). Floyd engages in shop talk with Russian colleagues, has a Skype-style chat with his young daughter (an excuse for Kubrick to feature his own daughter, Vivian), and plays a part in a political cover-up that goes nowhere: Americans have found a second monolith on the moon, but don’t tell the Russians about it. We’re nearly an hour into the film when we finally meet the hero, astronaut Dave Bowman (Keir Dullea), and Kubrick spends far too much time luxuriating in the details of life on his ship to Jupiter’s moon. Bowman’s battle with the ship’s computer HAL 9000 occupies almost the entire second hour.
Even in the awe-inspiring last act, there is a digression: that bizarre six minutes in which Bowman exits his space ship and wordlessly lives out his natural life in an eerie bedroom. Why doesn’t the third monolith simply deliver Bowman to his ultimate fate after the thrilling Stargate sequence that so evocatively depicts the transition to another plane of being? Why make him, and us, wait around? The bedroom scene is a narrative speed bump.
Kubrick’s most frustrating choice, though, is in the conclusion. I read Arthur C. Clarke’s novel version of 2001, which was written concurrently with Clarke and Kubrick’s screenplay, before I ever saw the story on screen. But from the film alone, it is unclear what has happened — we see only that Bowman, having passed to a land “beyond the infinite,” at the moment of death reaches toward the fourth monolith, which turns him into a fetus the size of Earth, over which he hovers, protectively or destructively. The novel’s resolution is clear: Bowman has become “Star Child” — an all-powerful being, essentially the new God. His journey becomes the story of man’s rise and ultimate destination, an alternate mythos directed at a post-Christian audience in an era when the ideal of a hero was dying. Bowman is nobody special. He is simply an ordinary man who happened to be the one to survive the attack from HAL 9000 and submit to the last two monoliths, which some superior power arranged for the purpose of elevating man.
The novel’s ending is breathtaking to contemplate; the film’s ending is breathtaking to experience. But unless you’ve read the book, it’s likely to be baffling, hence unsatisfying. The questions raised by the novel’s ending are far more engrossing than the question raised by the movie’s ending, which is “What just happened?” Kubrick’s ambiguity may have been intentional, but that doesn’t mean it was the best choice. As magnificent as 2001: A Space Odyssey is, it could have been even better.