'Paul, Apostle of Christ' Portrays the Early Christian Church at its Most Fragile
By Ann Hornaday
https://www.washingtonpost.com/
March 21, 2018 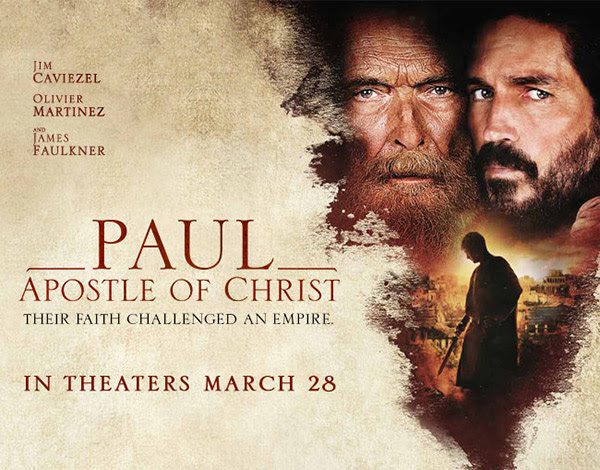 “Paul, Apostle of Christ” comes from Sony Pictures Entertainment’s Affirm label, an offshoot that has produced such Christian-themed dramas as “Heaven Is for Real,” “Soul Surfer” and “Risen.” Less interested in blunt proselytizing than more open-ended explorations of faith and its challenges, Affirm films have gratifyingly avoided the kind of pietistic Sunday-school pageantry that characterizes so many motion pictures of the genre.
Written and directed by Andrew Hyatt, “Paul, Apostle of Christ” is no exception. A portrait of the titular Christian convert and leader of the early church as he faces imprisonment and martyrdom at the hands of Roman oppressors, this absorbing drama benefits from lush production values (it was filmed in Malta) and first-rate performances from a cast of seasoned actors. Inspired by the New Testament book Acts of the Apostles, the story focuses on Luke (Jim Caviezel), a Greek physician and colleague of Paul’s in setting up early Christian communities, as he visits his incarcerated friend, desperately recording his final words of wisdom while Nero’s forces torture and murder their brothers and sisters outside the prison gates.
Hyatt includes flashbacks of Paul’s famous conversion, from tormentor of Christians to a believer, while on the road to Damascus. Those sequences are filmed in a milky, filtered light and slow-motion haze that threatens to drench “Paul” in Hallmark-card sentimentality. But when the action returns to Rome, the movie becomes far tougher and more intriguing. Despite Caviezel’s dazzlingly white teeth — not to mention the fact that he quotes the same Jesus on the cross that he played in Mel Gibson’s “Passion of the Christ” — the actor is convincing as a man of both reason and belief. James Faulkner brings sonorous authority and deep sensitivity to Paul, whose insistence on following Christ’s most essential commandments — to love God, and to love one’s neighbor as oneself — is both gentle and uncompromisingly courageous.
In a polyglot production that easily accommodates French, British and Irish accents, Olivier Martinez plays Paul’s captor, a man whose belief in his own Roman gods is being rattled by the fatal illness of his daughter. But next to Faulkner’s quietly affecting portrayal, the most compelling passages of the film take place in Rome’s embattled Christian quarter, where a frightened and rapidly fraying community is wondering whether to stay and fight or escape to rebuild. As Aquila and Priscilla, the nominal leaders of the beleaguered insurgents, John Lynch and Joanne Whalley deliver nuanced, fully inhabited performances that resonate with propulsive urgency and zeal.
“Paul, Apostle of Christ” is clearly well timed with Lenten reflections on sacrifice, service, suffering and responsibility. But it offers an equally relevant — and inspiring — portrayal of principled steadfastness and spiritual integrity in the face of a petty, corrupt and tyrannical leader. In that sense, and appropriately enough, “Paul, Apostle of Christ” offers both solace and a bracing, even revolutionary, challenge.
PG-13. At area theaters. Contains some violence and disturbing images. 107 minutes.

“I expected more,” muses Mauritius, the Roman prefect of the Mamertine Prison, critically eying the frail, bald-headed, bewhiskered prisoner standing unsteadily before him.

Perhaps Mauritius is looking for some sign of the charisma and commanding presence that would mark a powerful leader of an infamous cult blamed for burning half the city — or possibly something to warrant the rumors of the prisoner’s supernatural powers and otherworldly character.

Either way, Mauritius wouldn’t have been the first to be less than impressed by the unimposing figure cut by Paul of Tarsus. (Per 2 Corinthians 10:10, Paul seems to have had a rap for being less powerful in person than his mighty letters would suggest.)

The year is A.D. 67, about a dozen years into the notorious reign of Nero, widely deemed responsible for the Great Fire of Rome and said to have scapegoated Rome’s Christian community, not just for the fire, but for hatred of humanity.

For this they were tortured and executed in heinous ways, including being nailed to crosses and set ablaze at night. (The depiction of the persecution is drawn from the Roman historian Tacitus; an opening title tacitly supports the late folk etymology of Nero’s human pyrotechnics giving rise to the term “Roman candle.”)

Paul, Apostle of Christ offers a compelling account the last days of St. Paul — played with gravel-voiced authority by James Faulkner (Game of Thrones; X-Men: First Class) — in a dungeon in the Mammertine Prison, facing execution for treason. It’s not the unmade epic about the life of Paul of Tarsus many would like to see, but what it is is worthwhile in its own right.

Tying the story strands together is Paul’s old traveling companion, Luke the physician (Jim Caviezel). St. Luke slips quietly into Rome to visit Paul in prison and to bring from him some word of encouragement and guidance to the Roman Christians and the larger Christian world, in the process becoming entangled with Mauritius and his family.

The most dramatically and thematically interesting material emerges from the agonized deliberations of the Roman Christians under the de facto leadership of the missionary couple Priscilla and Aquila (Joanne Whalley and John Lynch), who are companions and fellow workers of Paul (mentioned as such several times in the New Testament).

Conflicting impulses divide the community: Should they remain in Rome, as light in the darkness? Should they seek a warmer welcome elsewhere? Or should they join other Romans opposed to Nero and oppose his tyranny by fighting fire with fire?

Even Priscilla and Aquila are split on whether to stay or go; there are no clear answers here. As for the question of fighting, when speaking to the community Luke strenuously repudiates this as contrary to the way and teaching of Christ — but when he talks to Paul about the horrors inflicted on the believers, he finds his conviction wavering. Though decisively rejected, the prospect and the plausibility of violence in the name of Christ is treated with a level of complexity welcome in such a film.

All of this means trouble at work for Mauritius; there’s also trouble at home. His wife, Irenica (Antonia Campbell-Hughes), is anxious about their daughter’s dangerous illness and worried that her husband may have incurred the wrath of the gods through lack of devotion — or deference toward his sectarian prisoner.

The prospect of a brutal but thoughtful pagan official with a seriously ill family member in a film like this raises the distinct possibility of a miraculous cure and a dramatic conversion. In Paul, Apostle of Christ, these possibilities are actually floated onscreen, which again suggests that the filmmakers may be thinking at least somewhat outside the box.

The conversations between Luke and Paul, which eventually lead to the sequel to Luke’s Gospel, the Acts of the Apostles, form the central arc. Paul recounts vignettes from his life to flashbacks of his early religious training and murderous opposition to what he sees as the heresy of Jesus' followers to his shattering Damascus Road encounter with Jesus Christ and his healing encounter with Ananias.

Luke and Paul have a comfortable relationship easing at times into good-natured banter, though it’s clear that Luke regards the “Old Man” with a species of awe, since everything Luke knows of Jesus has been mediated through Paul’s life and preaching.

If anything troubles Paul, it’s the weight of trauma he still carries from his early crimes as a persecutor of the Church. The stoning of Stephen (André Agius), the killing of a Christian child and other enormities weigh on him, heightened by visions in which he sees his victims standing silently as if bearing mute witness against him. The wordless resolution of this theme is perhaps the film’s most memorable and effective stroke.

Hyatt uses impressionistic slow motion for these visionary sequences, blended with flashback memories, breaking up what is otherwise a largely conversational film shot mostly in dimly lit interiors penetrated by atmospheric beams of light. (The most striking lighting effect involves a pagan offering made to a Roman deity — perhaps Asclepius, the god of medicine — represented as a vast disc-shaped visage like Rome’s famous Bocca della Verità, with bright beams blazing from its eyeholes like laser vision, ready to smite unworthy worshippers.)

At times the nonlinear storytelling leads to some ambiguity regarding the timeline. Some viewers might be confused by a reference in a closing scene to Paul’s two years under house arrest (with which the Book of Acts concludes). The reference is to Paul’s first Roman arrest before the Great Fire, a much less serious affair. (What’s especially tricky is that Paul’s surroundings in this scene are consistent with a house arrest, but the lodgings are not his own and two years don’t pass in the last minutes of the film.)

One oddity is the absence, even in dialogue, of other apostles, notably Peter, whose martyrdom in Rome is generally thought to have coincided closely with Paul’s. Presumably Peter would have been imprisoned like Paul or else with the underground Christian community, yet there’s no mention of him.

Hyatt is Catholic, so the silence about Peter in Rome — or even Linus and Clement, among his first successors as bishops of Rome — seems an odd missed opportunity. (On a subtle note, all the Roman Christian men have beards, which suggests that they’re probably mostly Jewish Christians with an occasional Greek like Luke. I would have liked to see a few clean-shaven Latin faces.)

Shot on a budget and a tight schedule in Malta (where Gladiator and Troy, and more recently Risen, were shot), Paul, Apostle of Christ is remarkably authentic-looking. The screenplay is intelligent and thoughtful, with only occasional missteps, ranging from an occasional poorly chosen phrase (like Luke’s “thoughts and prayers”) to a late moment in which a character who has suffered a trauma more dangerous than Paul’s floggings is up and about far too quickly.

Paul, Apostle of Christ is dedicated to all who have been persecuted for their faith. This potentially raises a sticky point.

Jesus warned Christians to expect persecution, and from his own crucifixion until today the Church has never been without opposition. Today, in fact, Christians around the world are being persecuted as never before. Yet at times the memory or idea of persecution has outstripped the reality.

After the legalization of Christianity by Constantine, Christians often looked back on the early centuries of the Church as a period of constant, ferocious persecution by one Roman emperor after another. In reality, with notable exceptions (including the persecutions of Nero and especially Diocletian), persecution was generally sporadic, haphazard and not state-sponsored. (Some skeptical historians have even questioned the Neronian persecution, though its historicity is accepted by most scholars.)

In our day, global persecution notwithstanding, American Christians are generally far less aggrieved than many of us are inclined to think. It’s easy to imagine many comfortable viewers watching Paul, Apostle of Christ as if it were not only a story of our heritage, and one that resonates with the experiences of suffering souls around the world, but a mirror of our own experience.

On the other hand, the film’s clear repudiation of violence in the name of Christ, its repudiation of efforts to seize the reins of power by any means necessary, and its theme of seeing enemies as human beings are especially welcome today. Sometimes in the effort to resist evil one risks becoming what one opposes, or worse. Paul, Apostle of Christ suggests that it’s always better to suffer evil than to be brought to its level in resisting it.

Steven D. Greydanus is the Register’s film critic and creator of Decent Films.

He is a permanent deacon in the Archdiocese of Newark, New Jersey.

Caveat Spectator: Some bloody and gruesome images, including images of burning bodies and a scene depicting the execution and immolation of a live victim. Teens and up.