Omar Khadr was 15 years old when he was shot and detained during a firefight in Afghanistan. He was later sent to the U.S. military prison in Guantanamo Bay, Cuba, where he pleaded guilty in 2010 in exchange for a chance to return to Canada.  (JASON FRANSON / THE CANADIAN PRESS FILE PHOTO)


The government of Canada recently issued an official apology -- and acknowledged awarding an "undisclosed" sum of money -- to Toronto-born Islamist terrorist Omar Khadr for his "ordeal" at the U.S. military base in Guantanamo Bay, Cuba, and "any resulting harm" he was caused by the "torture" (specifically, sleep deprivation, solitary confinement and threats) that led to his confession.

On July 7, Canadian Foreign Minister Chrystia Freeland and Minister of Public Safety and Emergency Preparedness Ralph Goodale released a statement announcing the "hope that this expression, and the negotiated settlement reached with the Government, will assist him in his efforts to begin a new and hopeful chapter in his life with his fellow Canadians."

The civil settlement was reached with Khadr, 30, who was 10 when his family returned to the Middle East, and 15 when he was arrested fighting in Afghanistan with al Qaeda and the Taliban, the terrorist organizations to which his father was affiliated -- on the basis of the Canadian Charter of Rights and Freedoms.

In 2003, Khadr confessed to throwing the grenade that killed U.S. Special Forces Sgt. 1st Class Christopher Speer and caused Sgt. 1st Class Layne Morris to lose an eye. Years later, he retracted his confession, claiming it had been extracted under duress. In fact, it was part of a plea deal that enabled him to be extradited to Canada to serve the rest of his sentence there.

With news of the large settlement he received -- 10,500,000 Canadian dollars (approximately USD $8,000,000) -- he gave an extensive interview to CBC's Power & Politics host Rosemary Barton, in which he said he thinks that the apology from the Canadian government "restores a little bit my reputation here in Canada, and I think that's the biggest thing for me." He declined to comment on having just received multi-millions in tax-free dollars.

He also had the effrontery to say that he just wants "to be a normal person" and finish his nursing degree to help under-served communities. "I have a lot of experience with... and appreciation of pain," he explained, expressing only sorrow that the Speer and Morris families consider him responsible for their own pain.

Amid harsh criticism against the Liberal government by opposition Conservatives and members of the public outraged that their tax dollars are going to a convicted terrorist, Canadian Prime Minister Justin Trudeau responded to reporters' questions on the matter during a press conference marking the July 8 close of G20 summit in Hamburg.

Trudeau said that the settlement had nothing to do with Khadr's 2002 actions on the battlefield in Afghanistan, but rather with the fact that his rights had been violated. This is precisely what the Canadian Supreme Court ruled in 2008 and 2010, after Khadr's lawyers sued for damages.

Trudeau added that the Charter of Rights and Freedoms protects all Canadians, "even when it is uncomfortable. When the government violates any Canadian's Charter rights, we all end up paying for it."

Meanwhile, Goodale tried to evade responsibility, by casting aspersions on the previous government, headed by Conservative Prime Minister Stephen Harper, in power when Khadr was returned to Canada in 2012 to serve the remainder of his prison sentence for five counts of war crimes. Goodale accused Harper of having "refused to repatriate Mr. Khadr or otherwise resolve the matter."

In spite of the fact that Khadr was arrested and detained when Liberal governments were in power in Canada, Goodale was referring to appeals during Harper's tenure -- which began in 2006 -- by Canadian Liberal and human rights lawyers to "bring Omar Khadr home."
In 2008, former Canadian Justice Minister Irwin Cotler wrote:

"I join other scholars and associations of jurists in calling for Omar Khadr to be transferred into the custody of Canadian law enforcement officials, to be afforded due process under Canadian law, with prospects for appropriate rehabilitation and integration."

"Admittedly, the Khadr family has emerged, as some have put it, as synonymous with terrorism. But, the test of the rule of law is not its application in the easy cases, but its retention in the unpopular ones... Omar Khadr, a child victim, should now be afforded the justice denied him all these years, however unpopular and unpalatable his case may appear to be."

In response to Goodale's implication that had it not been for the previous government, the current one would not have been forced to apologize to and pay Khadr, Harper immediately took to social media, writing:

The government today attempted to lay blame elsewhere for their decision to conclude a secret deal with Omar Khadr. The decision to enter into this deal is theirs, and theirs alone, and it is simply wrong. Canadians deserve better than this. Today my thoughts are with Tabitha Speer and the families of all Canadian and allied soldiers who paid the ultimate price fighting to protect us. 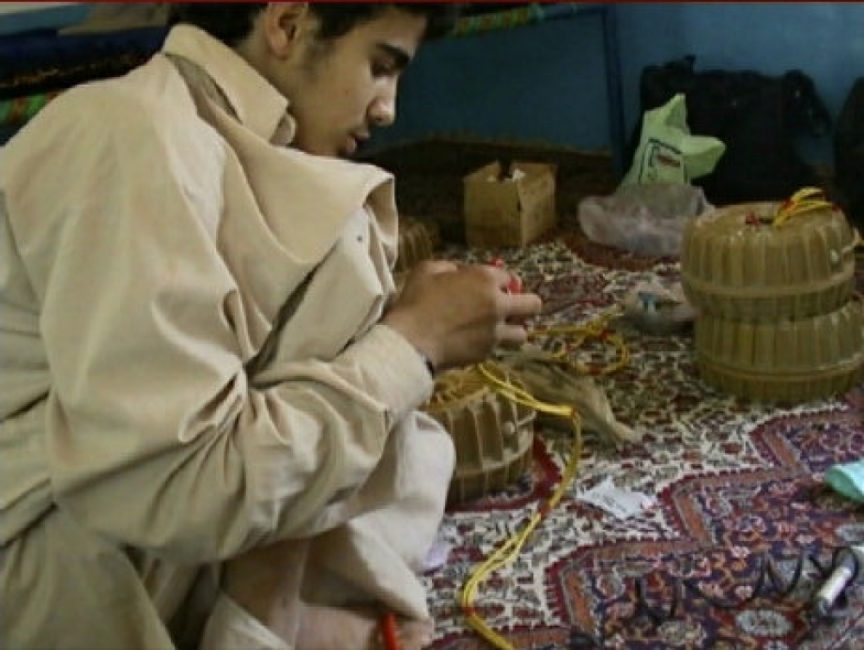 In this still image taken from a video found in the rubble of the compound where Omar Khadr was captured on July 27, 2002, a 15-year-old Khadr constructs an improvised explosive device. (Courtesy U.S. Defense Operations/Wikimedia Commons)

As the New York Post reported, Khadr is the son of a Palestinian mother and an Egyptian father (Ahmed Khadr), who had strong ties to the Muslim Brotherhood, and became one of Osama bin Laden's loyal lieutenants. After 9/11, Ahmed Khadr was placed on the FBI's most-wanted list in relations to the attacks. He was arrested in Pakistan in 1995 on suspicion of financing the suicide bombing at the Egyptian Embassy in Islamabad, in which 16 people were killed. Protesting his innocence, he went on a hunger strike, and the Canadian government, then headed by Liberal Prime Minister Jean Chrétien, rallied behind him.

While on a trade mission to Pakistan, Chrétien appealed to Prime Minister Benazir Bhutto, and a few months later, Ahmed was released from prison and sent back with his family to Toronto. However, according to the New York Post, the Khadr clan soon returned to Pakistan, where Ahmed Khadr resumed his connections with al Qaeda and the Taliban. Young Omar Khadr not only met with the leaders of these terrorist groups, but lived with his parents and siblings in the bin Laden family compound, attending al Qaeda training camps, which his father -- who was killed in 2003 -- partly funded.

"A month before he joined an al Qaeda cell in 2002, Omar was sent by his father for private instruction in explosives and combat... [where he] learned to launch rocket-propelled grenades and became skilled at planting improvised explosive devices that were used to blow up US armored vehicles in Afghanistan."

In his interrogation about the incident that led to his arrest and subsequent incarceration at Guantanamo, Omar Khadr said he had been on a suicide mission "to kill as many Americans as possible."

This did not prevent the U.S. military from flying an ophthalmologist to the Bagram Air Base -- where was being treated for wounds he sustained while fighting American and Canadian soldiers -- to save his eyes and keep him from going blind.

Nor did it cause Omar to experience gratitude on the one hand, or remorse on the other. On the contrary, as military court documents revealed, when he was informed that Speer had died, he said he "felt happy" for having murdered an American. He also said that whenever he remembered killing Speer, it would make him "feel good."

According to a report in the Globe and Mail, the Toronto lawyer representing Morris and Tabitha Speer -- who won a default judgment in 2015 in the U.S. against Omar for $134 million – began proceedings to contest the Canadian government's settlement and prevent it from going forward.

It is clearly too late for that; the money has already been transferred to Omar. Furthermore, the transaction was done swiftly and "quietly," to make legal action by taxpayers in Canada or the Morris and Speer families in America virtually impossible.

Morris is understandably angry and hurt. "The fact is Chris Speer and myself were fighting with Canadians in Afghanistan," he said.

"We were alongside the PPCLI (Princess Patricia's Canadian Light Infantry). There was a Canadian flag flying along with the American flag at our base there, so it's quite a thing that now Canada is giving millions to a guy who would attack a compound where Canadians were serving. I don't see this as anything but treason... As far as I am concerned, Prime Minister Trudeau should be charged."

Thus far, the administration in Washington has remained silent on Khadr pay-out, which came to light during the weekend of the G20 summit in Germany, where U.S. President Donald Trumpheaped praise on his Canadian counterpart.

Trump even opened his speech at a World Bank event to promote and finance women entrepreneurs in developing countries by declaring: "We have a great neighbor in Canada and Justin [Trudeau] is doing a spectacular job... Everybody loves him, and they love him for a reason..."

This assertion, given the information that has since emerged about Khadr case, was unfortunate. Far more ironic under the circumstances, however, was the "Statement on Countering Terrorism," signed by the leaders of the G20.

Its 21 clauses include a commitment to "address the evolving threat of returning foreign terrorist fighters ... from conflict zones such as Iraq and Syria and remain committed to preventing [them] from establishing a foothold in other countries and regions around the world," and to "facilitate swift and targeted exchanges of information between intelligence and law enforcement and judicial authorities... [to] ensure that terrorists are brought to justice."

Such words are empty without actions to back them up. Omar Khadr is a classic example of a "foreign terrorist fighter." Yet the Canadian legal system categorized him -- in Cotler's words -- as a "child victim, [who] should... be afforded the justice denied him all these years."

It is bad enough to describe a teenager who set out to "kill as many Americans as possible" in this way. It is far worse that he is a free -- and still very young -- man, paid not only respect by the government whose values he was raised to abhor, but millions of dollars, to boot. If anything serves to encourage other terrorists to leave North America and Europe to fight in the Middle East, it is stories such as this one.

The Trump administration must call Trudeau to task for this perversion, and offer an immediate and very public apology to Khadr's American victims, who did not receive a penny for their patriotic sacrifice.

Ruthie Blum is the author of "To Hell in a Handbasket: Carter, Obama, and the 'Arab Spring.'"
Posted by jtf at 6:18 AM