A Pope and a President in Poland

Pope John Paul II celebrates a Mass in Pilsudski Square in Warsaw, Poland, in 1979. The trip to Poland is widely seen as igniting the spark that helped lead to the downfall of communism. (CNS photo/Chris Niedenthal)
The greatest speeches given in Poland in the modern era were delivered in June 1979 by a pope. Ten months into his papacy, John Paul II sweetly asked the government of Poland for permission to journey home from Rome to visit his people. Europe was divided between the politically free and the unfree, on one side the democracies of Western Europe, on the other the communist bloc. Poland had been under the Soviet yoke since the end of World War II.
John Paul knew his people: They did not want dictatorship, and a primary means of resistance was through their faith. Every time you took communion it was a rebellion, a way of reminding yourself and others that you answered to a higher authority. The Catholic Church of Poland survived precariously, within limits, under constant pressure, as John Paul well knew, having been a cardinal in Krakow for 11 years.
What would happen when the first Polish pope went home? If Warsaw refused his request it would be an admission of weakness: They feared his power to rouse and awaken the people. But if they invited him they risked rebellion, which would bring on a Soviet crackdown and could bring in Soviet troops. They chose to invite him, calculating that as a sophisticated man he would, knowing the stakes, play it cool. He happily accepted their terms: It would be a religious pilgrimage, not a political event.

The Polish government did everything it could to keep crowds down. Parade routes were kept secret or changed. State media would censor word of what was said and done. Grade-school teachers told pupils he was a wicked man in gold robes, an enemy of the state.
And so it began. On June 2, in Victory Square in the Old City of Warsaw, John Paul celebrated Mass. Halfway through, the crowd began to chant: “We want God! We want God!” He asked: What was the greatest work of God? Man. Who redeemed man? Christ. Therefore, he declared, “Christ cannot be kept out of the history of man in any part of the globe, at any longitude or latitude. . . . The exclusion of Christ from the history of man is an act against man.” Even those who oppose Christ, he said, still inescapably live within the Christian context of history. And Christ is not only the past for Poland, He is also the future, “our Polish future.”
The chant turned to thunder: “We want God!”
John Paul was speaking not only to the faithful but to the rulers and apparatchiks of an atheist state. He did not explicitly challenge them. He spoke only of spiritual matters. And yet he was telling the government that Poland is the faith and the faith is Poland, and there is nothing communism can ever do to change that.
More, he was saying: God is real. And God sees one unity of Europe. He does not see “East” and “West,” divided by a wall or a gash in the soil. In this way, as I once wrote, he divided the dividers from God’s view of history.
The next day he spoke outside the cathedral in the small city of Gniezno. Again, he struck only spiritual themes—nothing about governments, unions, fights for political freedom. “Does not Christ want, does not the Holy Spirit demand, that the pope, himself a Pole, the pope, himself a Slav, here and now should bring out into the open the spiritual unity of Christian Europe . . .?”
Oh yes, he said, Christ wants that.
At both events he was telling Poles that they should see their position differently. Don’t see Europe divided between free and unfree, see the wholeness that even communism can’t take away. The map makers think they’re in charge. We know who’s really in charge.
At the end of the trip, at Krakow’s Blonie Field, a muddy expanse just beyond the city, there was again a public mass. The government refused to publicize it but word spread. Two million people came, the biggest gathering in the history of Poland.
It is possible, John Paul said, to dismiss Christ and all he’s brought into the history of man. Human beings are free and can say no. But should they say no to the one “with whom we have all lived for 1,000 years? He who formed the basis of our identity and has himself remained its basis ever since?” He was telling the communist usurpers: You’ll never win.
He extended his hands in an apostolic gesture. “I speak for Christ himself: ‘Receive the Holy Spirit,’ ” he said. “I speak again for St Paul: ‘Do not grieve the spirit of God.’ ” He urged Poles: “Be strong, my brothers and sisters! You must be strong with the strength that faith gives.”
It sounded like he was telling them to be strong in their resistance to communism.
“Today more than in any other age you need this strength.” Love, he said, is stronger than death. Seek spiritual power where “countless generations of our fathers and mothers have found it.”
This was a reassertion of the Polish spirit, and those who were there went home seeing themselves differently—not as victims of history but as fighters within a new and promising reality. At home they turned on state-run TV, which did not show the crowds and the chants but only a few words by the pope, and a few pictures. They were offended by the lie of it. It was another blow to the government’s claims of legitimacy.
Years later I asked Lech Walesa about the impact of the pope’s trip. Poland, he said, always knew that communism could not be reformed but could be defeated. “We knew the minute he touched the foundations of communism, it would collapse.” 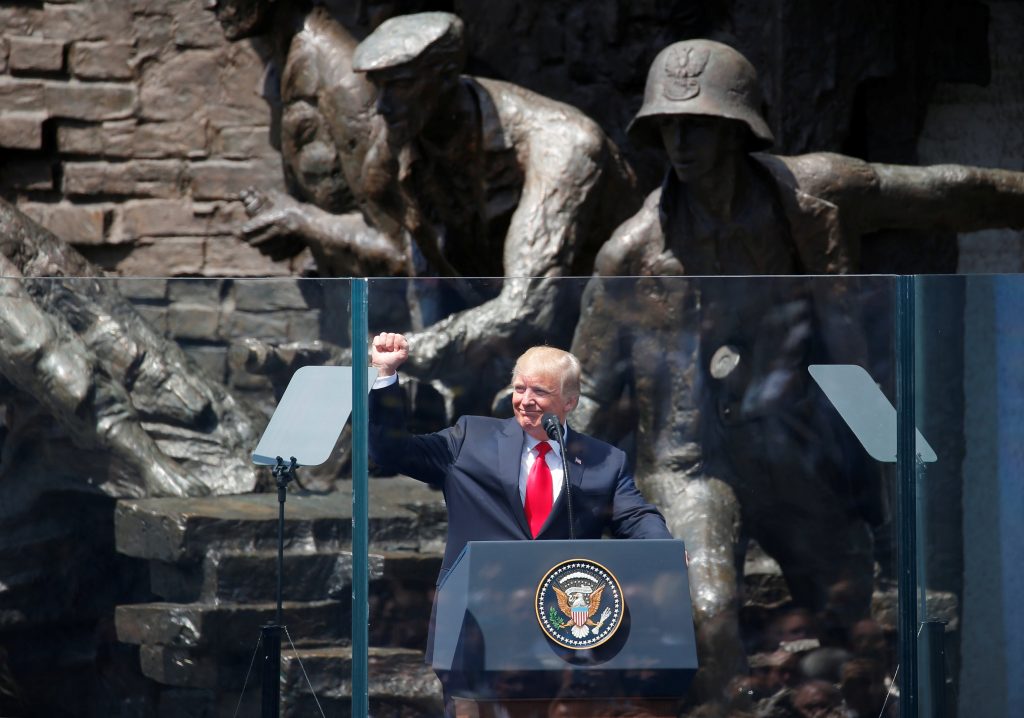 U.S. President Donald Trump gives a public speech in front of the Warsaw Uprising Monument at Krasinski Square, in Warsaw, Poland, Thursday. (Reuters/Laszlo Balogh)
And so to President Trump’s speech in Warsaw.
Near the top he deftly evoked John Paul’s 1979 visit and the sermon that brought on the chants. “A million Polish people did not ask for wealth. They did not ask for privilege. Instead, one million Poles sang three simple words: ‘We want God!’ ” He called the Polish people “the soul of Europe.”
It was a grown-up speech that said serious things. Article 5, the NATO mutual defense commitment, is still operative. Missile defense is necessary. He called out Russia for its “destabilizing activities.” He spoke as American presidents once did, in the traditional language of American leadership, with respect for alliances.
But he did it with a twist: The West is not just a political but a cultural entity worth fighting for. It is a real thing, has real and radical enemies, and must be preserved.
A lovely passage: “We write symphonies. We pursue innovation. We celebrate our ancient heroes . . . and always seek to explore and discover brand-new frontiers. We reward brilliance. We strive for excellence. . . . We treasure the rule of law and protect the right to free speech and free expression. We empower women as pillars of our society and our success. . . . And we debate everything. We challenge everything. We seek to know everything so that we can better know ourselves.”
If he talked like this at home, more of us would be happy to have him here. If he gives serious, thoughtful, prepared remarks only when traveling, he should travel more.
Posted by jtf at 6:58 AM