Still against Intervention in Syria

The U.S. has no vital national interest in joining its civil war. 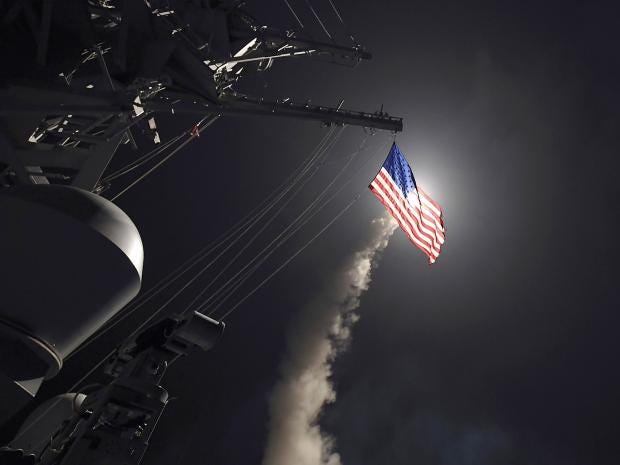 When it came to foreign policy, I was worried that the 2016 election would be a case of Clinton delivering the third Obama term. Instead, we have Trump giving us the third Clinton term.

President Donald Trump has now done what candidate Donald Trump committed not to do: He has launched a military strike against a foreign regime — a repulsive one, to be sure — in the absence of any threat, much less any attack, against the United States, in furtherance of no vital American interests.

Trump’s act of war is in violation of the Constitution, which requires congressional authorization for such an offensive use of military force, provoked by no aggression against our nation. Or, as someone once said:

Donald J. Trump  ✔@realDonaldTrump
What will we get for bombing Syria besides more debt and a possible long term conflict? Obama needs Congressional approval.

Mind you, that’s just one in a series of “Syria is NOT our problem” tweets in which Trump ripped Obama for not recognizing that “the so called ‘rebels’ may be just as bad (or worse)!”

The U.S. attack is an impulsive intervention in a civil war in which both sides — the Damascus/Tehran/Moscow alliance and its Sunni-jihadist/sharia-supremacist opposition — are hostile to the United States. It is a war in which Bashar al-Assad’s continuation in power, dismal as that prospect may be, is in no way the worst conceivable outcome for American national security.

Further, the missile strike offends sound policy: If the United States has not been attacked or threatened, congressional approval should be sought, not merely for legal purposes but also to ensure that complexities have been thought through and public support for a risky intervention has been won. Here, quite apart from the want of American legal footing, Trump lacks even the fig leaf of international legitimacy — there are none of those cryptic U.N. mandates that progressives prefer to our quaint Constitution.

Supporters of Trump’s aggression indignantly focus on Assad’s latest war crime, the barbaric use of chemical weapons — an apparent sarin-gas attack said to have killed 80 civilians. (It is necessary to qualify media reports of “civilian casualties” in the Syrian conflict, since Assad’s jihadist opposition is frequently referred to as “civilian.”)

I guess Obama’s gone, so we’re all in on “R2P” now. But, to repeat, Trump acted without congressional authorization; and as explained by Harvard’s Jack Goldsmith (a former Bush Defense and Justice Department official), in the absence of a cause rooted in self-defense or a Security Council resolution, there is no international-law justification for military attacks against another country — even one whose regime uses poisonous gases against its own people.

In any event, count me out of the virtue-preening that obsesses over the type of monstrous weapons employed when the issue is the monster using the weapons — of any kind. Both Assad and his opposition jihadists regularly commit atrocious war crimes targeting civilians. It is not beneath Assad, his enablers, or his enemies — al-Qaeda, ISIS, and their fellow militant Islamists, all of whom seek and would use weapons of mass destruction — to enter a village and firebomb or shoot up several dozen civilians (including women, children, and “beautiful babies”) with conventional arms. That is a commonplace, and it is horrifyingly typical of internecine Muslim conflicts, which are happening throughout the region.

The barbarism characteristic of Syria’s years-long civil war is not materially different because chemical weapons have been used, or because President Trump is now inflamed by the graphic images of death and destruction he has seen in government and media reports.

For those of us who have argued for years against Syrian intervention (see, e.g., here, here, here, and here), the situation has not changed. There is no American interest is deposing Assad if he would be replaced by (a) a Sunni sharia-supremacist regime that is more likely than Assad to make Syria a platform for jihadist attacks against our homeland and interests or (b) a Libyan-style failed state that has the same effect. To prevent that would entail a resource-intensive, open-ended commitment of U.S. forces for which the public has no appetite and the cost of which, in the absence of vital American interests, is prohibitive.

Moreover, the principal American enemy pulling Assad’s strings is Iran — now empowered by eight years of Obama’s appeasement and emboldened by an alliance with Putin. Until we have a strategy for both vanquishing the Sunni jihadists and choking the regime in Tehran (which supports the jihadists against us when it is not fighting them on behalf of Assad), attacking the Syrian regime is pointless.

In fact, it may be worse than pointless. Trump has been telling Americans for over a year that our myopic focus in Syria should be ISIS. He has been wrong about this (Iran aside, al-Qaeda has extended its influence while ISIS grabs the headlines); but at least it was a strategy based on the reality that ISIS, more than Assad, posed a significant threat to attack the U.S. and our allies. Accordingly, accommodations had been made with Russia — particularly in sharing air space — in order to promote U.S.-led coalition attacks against ISIS. Last night’s missile strike against the Syrian air base puts an end to those accommodations. Is the Assad attack worth it if it makes the ISIS campaign more difficult?

In response to such arguments, Trump’s supporters tout the “proportionality” of last night’s Tomahawk strike. Thus do progressive Republicans continue to join Democrats in distorting this military concept. Proportionality means that a use of force, and the collateral damage it is sure to entail, should be reasonably related to the military value of a lawful objective. It does not mean that an unauthorized, unprovoked attack is legitimate as long as it’s not too big.

An aggressive missile attack on another country is an act of war. If we were on the receiving end of it, we would not be very impressed by claims that it was “proportional.” Recall how Obama was skewered — from the left as well as the right — for making similar arguments about his unprovoked attacks on Libya. And what are we going to say when Putin cites last night’s strike as justification for his own unilateral but “proportional” attacks in Eastern Europe?

Perhaps mindful of these considerations, Trump officials are busily assuring everyone today that last night’s aggression was just a one-off. Indeed, Secretary of State Rex Tillerson provided the dizzying explanation that an attack on the Syrian regime did not signal any change in our policy of not attacking the Syrian regime, except to the extent that we were previously against pushing for regime change but now “steps are underway” to achieve regime change.

And what is going to replace Assad? The administration will have to get back to us on that one.

If these signals mean what they appear to mean, last night’s attack will be a Clintonesque pin prick: Lob a few missiles, appear to act forcefully for U.S. public consumption, but achieve nothing while emboldening our enemies — convincing them that we are impulsive, unserious, and united on neither a commitment to fight nor an objective to be achieved. Meanwhile, we are unlikely to change Assad’s behavior — it is apt to get worse with the saber-rattling about regime change. And we will encourage more bad behavior from Russia, which means more bad behavior from Iran.

At least, that’s what Donald Trump used to say.