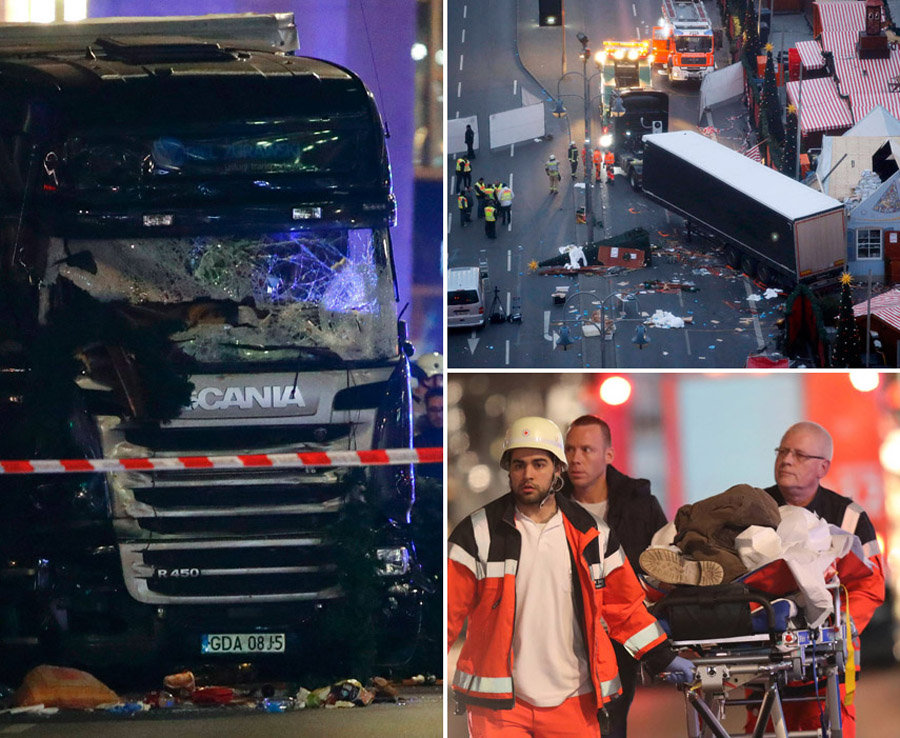 On Saturday morning, I recalled a conversation over the summer with a German lady who had "found herself on the receiving end of some vibrant multicultural outreach from one of Mutti Merkel's boy charmers":

As a result, she no longer goes out after dark. She had also decided - with reluctance, because she enjoyed it - to cancel her participation in a local Christmas market, where she'd sung carols every year - in broad daylight.
"Why would you do that?" I asked.

"Because it's Christmas," she said, "and I'm worried Christmas will be a target."

Christmas markets are a grand German tradition, but probably not for much longer.

Forty-eight hours later, twelve people are dead and 48 are injured (at the time of writing) because they attended a Christmas market at Breitscheidplatz in Berlin. This BBC headline effortlessly conveysthe madness of our times:

Ah, so the truck did it. So it's nothing that can't be fixed by some basic truck-control measures - like, say, licensing and registration of trucks.

The less obviously evasive responses were almost as dispiriting. An English tourist visiting from Birmingham complained that in his native city ugly bollards line the sidewalks to obstruct any similarly homicidal lorries in the vicinity. The Christkindlmarkt is a German tradition dating back to the Middle Ages: Munich's is over 700 years old. A society that can only hold three-quarters-of-a-millennium-old traditions behind an impenetrable security perimeter is a society that will soon lose those traditions. My own preference, as I've stated, is that, if free countries have to have unsightly security controls, why don't they have them around the national borders rather than around every single thing inside those borders?

"I think this is insane when I listen to people say 'oh, we're now going to have to have metal detectors in night clubs, security in nightclubs. Ok, so what happens next? They blow up a bakery, they blow up a little pastry shop, so then you're gonna have to have metal detectors to get into the pastry shop?"
"Instead of having all these individual perimeters around every Dunkin Donuts franchise or every gas station, or ever J.C. Penny, why not have just one big perimeter around the country?" Steyn concluded. "We could call it a border! And we could have, like, border security!"

But that's just crazy talk. On Fox News' top-rated Kelly File, Martha MacCallum asked two experts about the market slaughter and both of them instantly pivoted to military strikes against Isis, the need to form an Arab version of Nato, and other grand schemes. I'm all in favor of destroying Isis, but Isis is a mere symptom, not a cause. After Isis is destroyed, it'll be something else. In many parts of the world, it's already something else: al-Qa'eda, the Taliban, Boko Haram, Abu Sayyaf, al-Shabaab, al-Nusra, al-Gama'a al-Islamiyya, al-this, al-that, al-the other...

Neither of Martha's guests so much as raised the question of why people who want to murder you for attending a Christmas market are in your country in the first place.
From Reuters:

German media cited local security sources as saying that there was evidence suggesting the arrested suspect was from Afghanistan or Pakistan and entered Germany in February as a refugee.

Gee, that's not very grateful to the country that gave you refuge, is it? Western leaders keep assuring us that it is "a very, very small percentage" of the Muslim community who are "violent extremists". They never actually tell us what percentage it is - one per cent, point-one, point-oh-oh-oh-one - but they are agreed that it is a percentage. A percentage is a very simple concept: If it's 0.001 per cent of the Muslim community that are "violent extremists" and you have 100,000 Muslims, then, yes, it's "a very, very small percentage". If you then admit another 100,000 Muslims, then you've just doubled the number of "violent extremists". And, if you keep on doing that year in, year out, then, regardless of whether the percentage is stable, you are importing more and more people who want to kill your own citizens.

Why? What's the benefit? And why do people like that Birmingham tourist think the answer to more and more Muslims is more and more bollards? I spent most of the last year in France and other parts of Western Europe and there are soldiers everywhere - outside churches, post offices, railway stations, shopping malls, Jewish schools initially and now non-Jewish schools, topless beaches and Christmas markets... And it's not enough, and it can never be enough.

Just a few hours before twelve German families had a big bloody hole blown through them a week before Christmas, my old friend and sometime warm-up act Jonathan Kay, with his usual impeccable timing, decided to have another sneer at those simpletons who fret about where all this is heading:

Ha! What rubes, eh? As flattering as it is to be blamed for an entire nation's Islamophobia, I'd say the reason Canadians - like the French and Germans and Belgians and almost everybody else - think there are more Muslims than there are is fairly obvious: Islam punches above its weight. Even on days when they're not mowing down Christmas shoppers and assassinating Russian ambassadors - or stabbing French priests, or blowing up Belgian airports, or sexually assaulting German New Year revelers - the less incendiary news of Islam in the west nevertheless conveys an assertiveness and confidence that would still be impressive even if it were 17 per cent. By the time it actually is 17 per cent, you'll think it's 48.

Since we seem to have wound up obsessing on percentages, I suppose twelve dead Germans is likewise an insignificant percentage, and far too trivial to sophisticates to warrant "Mark Steyn-esque hysteria". But it is December 20th, and for the victims' families in five days' time that will be 100 per cent of their children or parents or boyfriends or girlfriends missing at the Christmas table. Say a prayer for them: They died because of the recklessness of a western political class that has doubled down on a mad long-shot sociopolitical experiment that can only end catastrophically.