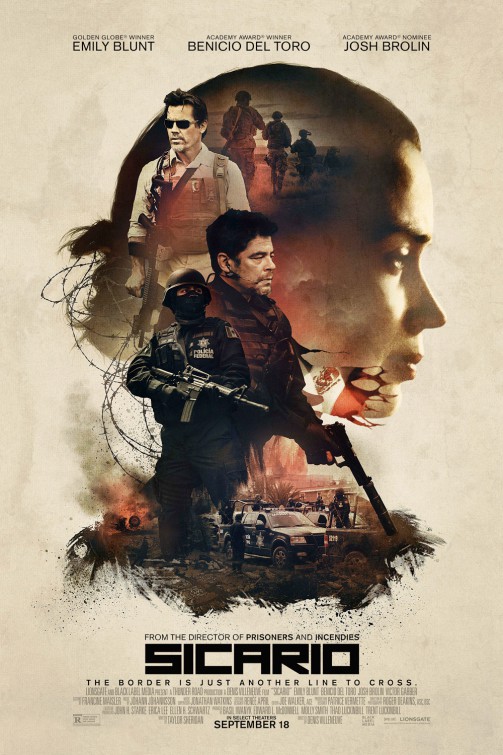 In the superb drug thriller “Sicario,” a rugged FBI field agent (Emily Blunt) asks her new boss (Josh Brolin) what exactly his plans are as he convenes a task force of several federal agencies to take on Mexican drug lords. He smiles. “To dramatically overreact,” he says cheerfully. It’s a line to file next to “Terminate . . . with extreme prejudice.” Cue hellfire.

“Sicario,” which combines dizzying action scenes with a taut script, ravishing photography and an otherwordly musical score, is a knockout film from Quebecois director Denis Villeneuve, who propelled himself into the front rank of directors with the harrowing 2013 kidnapping drama “Prisoners.”

“Sicario,” which begins with a helicopter inviting itself into a house, is equal parts an action saga and a tough-minded drama about power — ultimately, the indefatigable force that is drug addiction.
Kate (Blunt), who busts down doors in Arizona for the FBI, is casually recruited by Brolin’s Matt, a “DoD adviser,” which is what you call yourself when you’re CIA.

She is a superfluous presence on his all-star team of grizzled operatives, plus he won’t even tell her what her new colleagues are up to. A mission in “the El Paso area” turns out to mean a sojourn to Mexico to kidnap the brother of a drug lord so he can be tortured into giving up the location of a secret tunnel across the border. Matt’s top aide (Benicio del Toro) describes himself as a former Mexican prosecutor who also has ties to Medellín, Colombia. “Nothing will make sense to your American eyes, and you will doubt everything we do,” he advises her. “But in the end, you will understand.”


Villeneuve, cinematographer Roger Deakins and composer Jóhann Jóhannsson combine to make the action scenes gorgeous, scary and exciting, while the script by Taylor Sheridan is mordant and smart, with not a wasted word. It’s unfortunate that Blunt’s character — by-the-books, married to her job — is underdeveloped, but she is such a determined presence that you may not notice. Great as she is, though, Del Toro, coiled as a cobra, is even better, while Brolin — merry and lethal, a warrior in flipflops — is my favorite of the lot.
“Sicario” (“hit man” in Spanish) is like a fixed-up version of 2013’s “The Counselor,” a film with both merits and flaws galore, and it, like “Traffic” and “Chinatown,” elegantly carries the grim burden of knowing that in its world there is no triumph, no solution, no redemption. As Del Toro puts it, “This is a land of wolves now.”
Posted by jtf at 7:23 AM