Obama: Christianity No Different Than the Islamic State 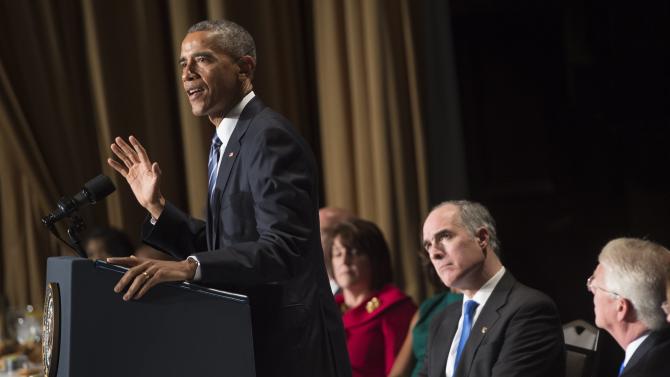 
As the world reacts with shock and horror at the increasingly savage deeds of the Islamic State (IS)—in this case, the recent immolation of a captive—U.S. President Obama’s response has been one of nonjudgmental relativism.

Speaking at the National Prayer Breakfast on February 5, Obama counseled Americans to get off their “high horse” and remember that Christians have been equally guilty of such atrocities:


Unless we get on our high horse and think this [beheadings, sex-slavery, crucifixion, roasting humans] is unique to some other place, remember that during the Crusades and the Inquisition, people committed terrible deeds in the name of Christ.

This is not just a theoretic point; it is the very reason that Muslims are still committing savage atrocities.  Every evil act IS commits—whether beheading, crucifying, raping, enslaving, or immolating humans—has precedents in the deeds of Muhammad, that most “perfect” and “moral” man, per Koran 33:21 and 68:4 (see “The Islamic State and Islam” for parallels).

Does Obama know something about Christ—who eschewed violence and told people to love and forgive their enemies—that we don’t?  Perhaps he’s clinging to that solitary verse that academics like Philip Jenkins habitually highlight, that Christ—who “spoke to the multitudes in parables and without a parable spoke not” once said, “I come not to bring peace but a sword.” (Matt. 10:34, 13:34).

Jesus was not commanding violence against non-Christians but rather predicting that Christians will be persecuted, including by family members (as, for example, when a Muslim family slaughters their child for “apostatizing” to Christianity as happens frequently).

Conversely, in its fatwa justifying the burning of the Jordanian captive, the Islamic State cites Muhammad putting out the eyes of some with “heated irons” (he also cut their hands and feet off).  The fatwa also cites Khalid bin al-Walid—the heroic “Sword of Allah”—who burned apostates to death, including one man whose head he set on fire to cook his dinner on.

Nor is the Islamic State alone in burning people.  Recently a “mob accused of burning alive a Christian couple in an industrial kiln in Pakistan allegedly wrapped a pregnant mother in cotton so she would catch fire more easily.”

As for the Islamic “authorities,” Al Azhar—the Islamic world’s oldest and most prestigious university which cohosted Obama’s 2009 “New Beginning” speech—still assigns books that justify every barbarity IS commits, including burning people alive.  Moreover, Al Azhar—a religious institution concerned with what is and is not Islamic—has called for the cutting off of the hands and feet of IS members, thereby legitimizing such acts according to Islamic law.

On the other hand, does Obama know of some secret document in the halls of the Vatican that calls for amputating, beheading or immolating enemies of Christ to support his religious relativism?

As for the much maligned Crusades, Obama naturally follows the mainstream academic narrative that anachronistically portrays the crusaders as greedy, white, Christian imperialists who decided to conquer peace-loving Muslims in the Middle East.

Again, familiarity with the true sources and causes behind the Crusades shows that they were a response to the very same atrocities being committed by the Islamic State today.  Consider the words of Pope Urban II, spoken almost a millennium ago, and note how well they perfectly mirror IS behavior:


From the confines of Jerusalem and the city of Constantinople a horrible tale has gone forth and very frequently has been brought to our ears, namely, that a race from the kingdom of the Persians [i.e., Muslim Turks] … has invaded the lands of those Christians and has depopulated them by the sword, pillage and fire; it has led away a part of the captives into its own country [as slaves], and a part it has destroyed by cruel tortures; it has either entirely destroyed the churches of God or appropriated them for the rites of its own religion ….  What shall I say of the abominable rape of the women? To speak of it is worse than to be silent….  On whom therefore is the labor of avenging these wrongs and of recovering this territory incumbent, if not upon you? You, upon whom above other nations God has conferred remarkable glory in arms, great courage, bodily activity, and strength…

If the crusaders left their own lands and families to come to the aid of persecuted Christians and to liberate Jerusalem, here is Obama portraying them as no better than the Islamic State—which isn’t surprising considering that, far from helping persecuted Christians, Obama’s policies have significantly worsened their plight.

According to primary historical texts—not the modern day fantasies peddled by the likes of Karen Armstrong, an ex-nun with an axe to grind—Muslim persecution of Christians was indeed a primary impetus for the Crusades.

As for the Inquisition, this too took place in the context of Christendom’s struggle with Islam. (Isn’t it curious that the European nation most associated with the Inquisition, Spain, was also the only nation to be conquered and occupied by Islam for centuries?)  After the Christian reconquest of Spain, Muslims, seen as untrustworthy, were ordered either to convert to Christianity or go back to Africa whence they came.  Countless Muslims feigned conversion by practicing taqiyya and living as moles, always trying to subvert Spain back to Islam.  Hence the extreme measures of the Inquisition—which, either way, find no support in the teachings of Christ.

Conversely, after one of his jihads, Muhammad had a man tortured to death in order to reveal his tribe’s hidden treasure and “married” the same man’s wife hours later.  Unsurprisingly, the woman, Safiya, later confessed that “Of all men, I hated the prophet the most—for he killed my husband, my brother, and my father,” before “marrying” her.

In short, Obama’s claim that there will always be people willing to “hijack religion for their own murderous ends” is patently false when applied to the Islamic State and like organizations and individuals.

Muhammad himself called for the murder of his enemies; he permitted Muslims to feign friendship to his enemies in order to assassinate them; he incited his followers to conquer and plunder non-believers, promising them a sexual paradise if they were martyred; he kept sex slaves and practiced pedophilia with his “child-bride,” Aisha.

He, the prophet of Islam, did everything the Islamic State is doing.

If Muslims are supposed to follow the sunna, or example, of Muhammad, and if Muhammad engaged in and justified every barbarity being committed by the Islamic State and other Muslims—how, exactly, are they “hijacking” Islam?

Such is the simple logic Obama fails to grasp.  Or else he does grasp it—but hopes most Americans don’t.