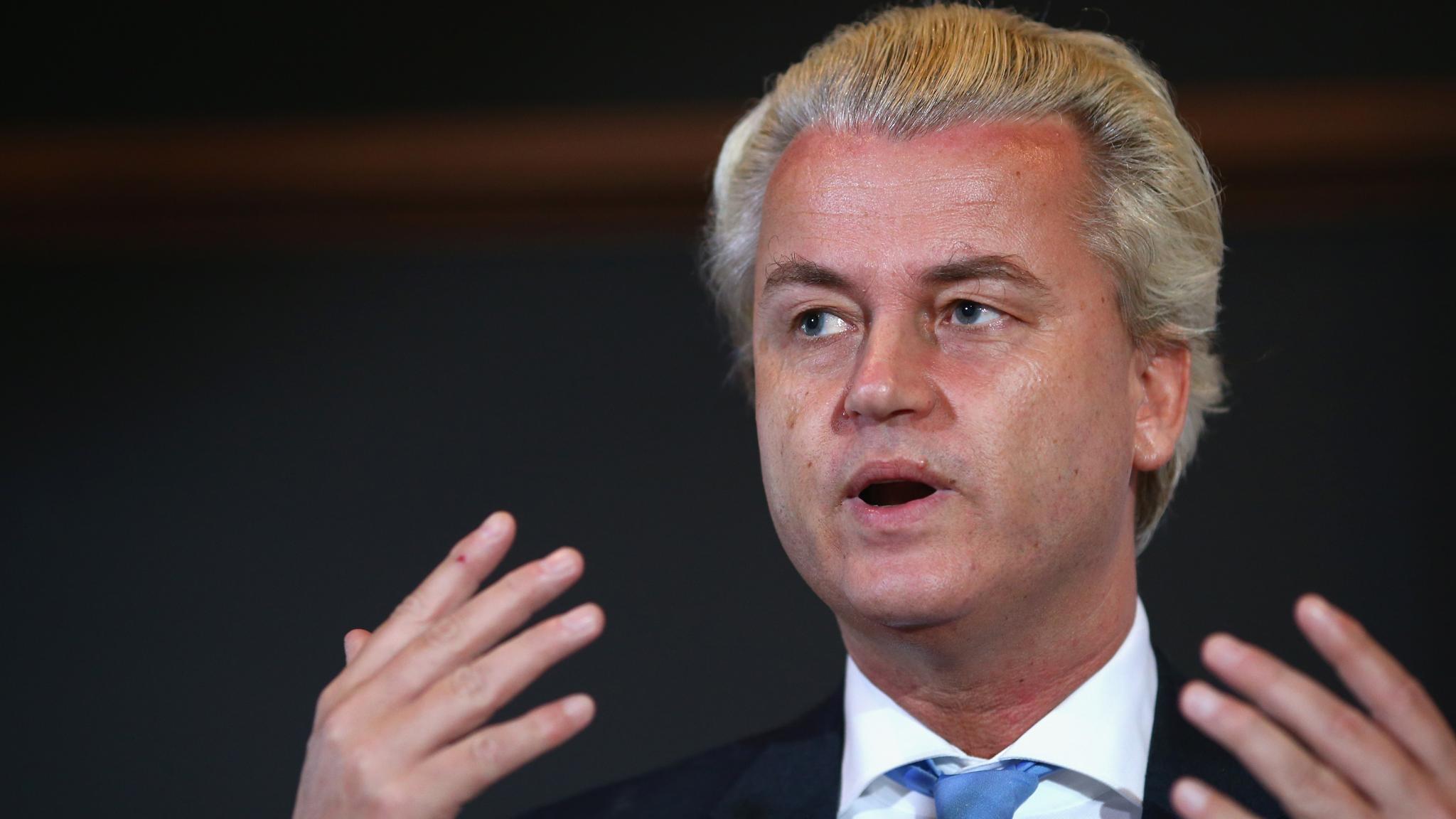 That last line caused a firestorm. Major politicians compared Wilders to Hitler. Prime Minister Mark Rutte demanded he apologize. The Freedom Party’s leader in the European Parliament, Laurence Stassen, quit the party, as did many local and regional officials. (Commentator Tom-Jan Meeus maintained in NRC Handelsblad that Wilders “has lost his closest allies, his best member of parliament and his European assembly member.”) The Labor Party announced that it wouldn’t support any Freedom Party motion in Parliament. Hundreds of police complaints were reportedly filed against Wilders, and police, according to Soeren Kern, made it easier to file them “by providing pre-filled ‘Wilders forms’ and offering to come to people’s homes if they intend to press criminal charges, rather than having them come to the police station, as is the normal procedure.” A Facebookpage for people filing police complaints against Wilders gathered nearly 100,000 “likes.” The new U.S. ambassador, Timothy Broas, stated that Wilders’s remarks were at odds with Dutch and American values. The Freedom Party fell in the polls from the largest to the third largest Dutch party. “Schools,” wrote Kern, “began to issue guidelines to instruct pupils on how to deal with Wilders.” In Amsterdam, 5,000 people demonstrated against Wilders and the mayor led a chant of “We are all Moroccans!” Dutch TV aired “a church service against Wilders.” An actor named Thijs Römer, in a reference to the murderer of Fortuyn, Volkert van der Graaf, tweeted: “Volkert, where are you when your country needs you?”

Wilders refused to apologize. “I haven’t said anything wrong, only what most people think.” He hadn’t been calling, he insisted, for wholesale deportation: he’d been talking about restricting immigration, supporting voluntary repatriation, and sending criminals with dual nationality back to Morocco. Period.

There are a number of things to be said about Wilders’s comment. First of all, yes, it was unwise. He came off sounding like a bigot. I don’t think he’s a bigot. But that doesn’t matter. In the Netherlands, every single member of the political, media, and academic establishment is constantly waiting for Wilders to say something that they can seize upon and point to as purported evidence of his bigotry. He gave them fuel. That was unfortunate.

Then again, Pim Fortuyn and Ayaan Hirsi Ali were a lot more careful about how they expressed themselves in these matters – and, in the long run, it didn’t make much difference. Their enemies still found ways to demonize them – still found a word here, a word there, to grasp onto and wave in the air as examples of their vile intolerance. When you’ve got enemies who act like this, you’re sunk. Pim ended up dead. Ayaan ended up being driven out of the country (which, of course, turned out to be the best thing that happened to her).

At the other end of the spectrum, Theo van Gogh was deliberately outrageous, calling Muslims “goat fuckers” and the like. But then, he was a prominent writer and broadcaster and filmmaker, not a politician, and if such rhetoric didn’t get him frozen out of the public square, it was partly because he was irreverent about pretty much everybody and everything – that was his image, that was his shtick. He was a professional polemicist, able to get away with using language for which other media figures would lose their jobs, because most people understood that being over-the-top was part of his act – that, far from being a bigot, he was a guy who didn’t like seeing Western freedoms threatened, and the rights of women and Jews and gays and others trampled, by the bullying adherents of a totalitarian faith.
In any event, he ended up getting killed, too.

What about Wilders, then? As a politician, he can’t afford to express himself in the colorful way van Gogh did. But on March 19 he went over the line, in the view of many, and he paid for it. That’s politics. Especially in the age of Facebook and Twitter.

But let’s never forget this. As of this coming November, Wilders will have been living under constant armed protection, deprived of his freedom, for ten years – thanks to threats made on his life by the likes of Mohammed Bouyeri, the Moroccan murderer of Theo van Gogh. He’s been put on trial, in his own purportedly democratic country, for speaking his mind about Islam. Because of his views on Islam, he’s been banned from entering certain other Western countries, despite his position as an elected member of the Dutch parliament. He’s been sued for a large sum of money by a radical imam who claimed his feelings were hurt by Wilder’s film Fitna,about Islam’s systematic abuse of women. He’s even been the subject of an extradition request by the Kingdom of Jordan, which wanted to try him for the capital crime of blasphemy under sharia law.

Is it so difficult to understand that Wilders, who may be under more daily pressure than any man in Europe, can’t, at every moment, when speaking about people who have been seriously dedicated for years to bringing about his death, keep himself from slipping into rhetoric that’s less than perfectly sensitive?

As it happens, only a day or so before Wilders’s “fewer Moroccans” line made international headlines, a Dutch Muslim rapper named Hozny released a music video showing “a man representing Dutch politician Geert Wilders” being “abducted by armed men and brought to Hozny, who makes him kneel in front of an Islamic flag.” At the end of the song, which includes the line “You are only alive because Allah allows it,” Wilders is executed.

Unlike Wilders’s “fewer Moroccans” line, this video has not gained worldwide attention. Obviously it wasn’t as offensive.

Hard facts: not all that long ago, the Netherlands was a well-nigh idyllic little country. Now it’s a nightmare in the making. Almost everyone acknowledges this now. But why is it a nightmare in the making? Be careful answering that question, or you’ll be sorry. Yes, a majority of young Dutch Moroccans have police records – but if you speak this raw truth flat-out, without cloaking it in the usual euphemisms and qualifications and reassurances, you’ll be branded a bigot. Yes, many Dutch Muslims have gone to Syria to be jihadists, and a poll last year of Dutch Muslims showed that almost three-quarters of them regard such people as heroes – but, again, if you choose to communicate this fact to others, you’d damn well better be exceedingly careful how you go about doing it. Put your foot even slightly wrong, and suddenly you won’t be a good guy criticizing the bad guys – you’ll be a racist. And the second you misstep, the armies will be lining up to condemn you and to demonstrate their own virtue by dropping the relevant, important, and thoroughly grim facts about the subject at hand down the memory hole and proclaiming inanely: “We are all Moroccans!”

“We are all Moroccans!” This sort of nonsense is now commonplace. Recently, in Sweden, after some guy was accused of pulling off a Muslim woman’s head covering, non-Muslim women across the country expressed support for the alleged victim by tweeting pictures of themselves in veils: look at us, we love Islam! Three years ago, in Norway, after one lunatic slaughtered dozens of Labor Party youth members purportedly because he opposed Muslim immigration, politicians and royals rushed to mosques to declare their solidarity with Muslims: look, we’re not Islamophobes, like that mass murderer! Now, a Dutch politician makes a less than ideally formulated comment about Moroccans and thousands of his countrymen waste no time lining up to say: “We are all Moroccans!” It’s the ultimate multicultural compulsion: to prove that one isn’t racist – and assert that someone else is.  And thereby replace the real, tough, uncomfortable issue with a fake issue, a non-issue, a BS issue, that provides the multiculturalist with a delicious frisson of self-righteousness.

In a speech on March 22, Wilders explained in detail what he had meant by the “fewer Moroccans” line. His party platform calls for “a three-stage approach” to the Islamic immigration issue: “limiting immigration from Islamic countries, including Morocco”; “promoting re-emigration” to Muslim countries; and “deporting criminal Moroccans by revoking their Dutch passports, if they have dual nationality – and most have – and sending them back to the country of their other nationality.” In answer to the question “why did I refer to Moroccans in particular?”, Wilders said he’d done so “because Moroccans are at the top of the list of over-representation in crime and welfare dependence. Moroccan youths younger than 23, more than 60% of them are known to the police and the judicial system. Moroccans are 22 times more frequently guilty of violent crime such as mugging and robbery. They are seven times more likely to be on welfare. These are facts that I haven’t made up, but these are facts that I have to make known or I might just as well not have gone into politics. I went into politics to state things like this, and to propose solutions.”

And that’s the bottom line. Your typical high-level European politician – say, oh, Jens Stoltenberg, the recently dethroned prime minister of Norway who was just named head of NATO (an organization for whose founding values he has never shown particular enthusiasm) – plainly went into politics not to face up to hard truths or put his life on the line for freedom, but so that he could eventually end up as, well, head of NATO, or as a jet-setting big shot at the UN or EU or World Bank. Yes, Wilders stumbled with his line about “fewer Moroccans,” but on a European landscape crowded with empty-suit politicians who don’t really stand for anything except for their own careers, whose approach to Islam and immigration is to recite facile multicultural mantras, and whose only real qualification for anything is that they never, ever offend (precisely because they strenuously skirt the topics that matter the most), Wilders is the real thing: a brave, selfless man determined to steer the ship of state through turbulent waters safely into port. The Dutch would be fools to throw him overboard.