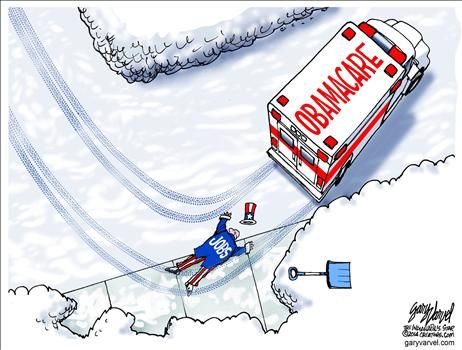 It’s only February, but it’s already my favorite word — or phrase, I guess — of the year. (Who knows, by December it may be shortened to “joblock.”) It’s not euphonious or edgy, but it does offer insight into the unreality of the Democrats’ predicament.

The Congressional Budget Office issued a politically explosive report this week, finding that Obamacare will reduce the number of hours Americans work by the equivalent of 2.5 million full-time jobs. This is different from killing 2.5 million jobs, Obamacare defenders are quick to insist. This will be a shortfall on the demand, not supply, side. In other words, people with health insurance will opt not to work in certain circumstances if they know they won’t lose their coverage.

Democrats insist this is a boon. Indeed, many are talking about it as an act of liberation (which reminds me of an eleven-year-old headline from the Onion: “IBM Emancipates 8,000 Wage Slaves”).

House minority leader Nancy Pelosi says the CBO report vindicates Obamacare, because “this was one of the goals: to give people life, a healthy life, liberty to pursue their happiness. And that liberty is to not be job-locked, but to follow their passion.” Pelosi is particularly invested in this view. She’s been mocked for years now for her repeated claims that Obamacare is an entrepreneurial bill because it would let Americans quit their jobs to, among other things, “write poetry.”

I know I’m not alone in thinking that it was totally worth seizing a seventh of the U.S. economy, polarizing Washington, throwing millions of Americans’ lives into turmoil, and forcing millions of others to pay more in premiums and deductibles while spending $1.2 trillion just so we could liberate the Job-Locked Poets! (Whoever seizes that as the name of your new band: You’re welcome.)

Now everyone is taking a bow for freeing Americans from the shackles of employment. “People shouldn’t have job-lock,” Harry Reid declared this week. “We live in a country where there should be free agency. People can do what they want.”

That’s an awkward way of touting a law that compels people to buy insurance even if they don’t want it, during a “recovery” where millions can’t find a job.

Still, it pains me to say Reid has a point. So do other Obamacare supporters when they claim some conservatives are being hypocritical, or at least inconsistent, about the CBO report. Republicans have been arguing for years that the hard linkage between employment and health insurance is a mistake. (It began as an unintended consequence of World War II–era wage freezes.) And Republicans have been offering ways to fix the problem for years. There’s no point in suddenly shouting that “job-lock” isn’t a problem.

But there are some things worth shouting. First of all, according to the CBO, not every lost hour of work is the amateur poet’s gain. Yes, Obamacare lets people keep their health insurance even if they quit their jobs to master iambic pentameter. But the law also raises the implicit marginal tax on people looking for work; the more you earn, the fewer subsides you get. Thus, for many people, the costs of taking on more or better work will exceed the gains. So at least some people won’t feel liberated so much as trapped.

Also, just because Republicans have said that job-lock is a problem doesn’t mean they have to support the Democrats’ solution. I agree with my daughter that she needs a new hobby, but that doesn’t mean I have to buy her a team of lions so she can be a lion tamer.
Representative Paul Ryan and other opponents of Obamacare have proposed reforms that would have made insurance cheap and portable. Democrats said no because their top priority was never ending the tyranny of job-lockage. Rather, they claimed their top priority was to help some 30 million uninsured Americans.

Which is why the real CBO story should be: “That awkward moment when everyone realizes Obamacare was a huge mistake.” The same CBO report projects that by 2024 the number of non-elderly uninsured will be — drum roll, please — 31 million Americans.

And that’s why all of this talk of Democrats as the Job-Lock Liberators is pathetic and hilarious at the same time. Virtually every promise has been broken, every prediction falsified. And now, at a time when millions want work that doesn’t exist, Democrats are claiming victory by trimming the amount of work actually being done.

Hopefully voters will look for ways to liberate these Democrats from the curse of job-lock come November.

— Jonah Goldberg is the author of The Tyranny of Clichés, now on sale in paperback. You can write to him by e-mail at goldbergcolumn@gmail.com, or via Twitter @JonahNRO. © 2014 Tribune Media Services, Inc.