The pastor Dietrich Bonhoeffer and his lawyer brother-in-law worked together to resist the Nazis and help Jews escape Germany.

By
ALEXANDER KAZAM
Though the Nazis never won an outright majority in the parliament of the decaying Weimar Republic, they received nearly 44% of the vote in the critical election of March 1933—a mandate that enabled Adolf Hitler's anointment as supreme leader. To some, however, the evil character of the Nazi regime was visible from the start. Among them were the young Lutheran theologian Dietrich Bonhoeffer and his brother-in-law Hans von Dohnanyi, the subjects of Elisabeth Sifton and Fritz Stern's "No Ordinary Men." In this concise, engaging account, Ms. Sifton, an eminent book editor, and Mr. Stern, a distinguished historian of Germany, trace Bonhoeffer and Dohnanyi's evolution from partaking in small acts of opposition to playing leading roles in the anti-Hitler resistance.
Bonhoeffer, a pastor, fought Nazi efforts to meld Protestant churches into a single "Reich Church." Dohnanyi, a lawyer in the military intelligence service, used his position to document Nazi crimes and save Jews while joining several plots to kill Hitler. Their paths of resistance intertwined when Dohnanyi recruited Bonhoeffer to the anti-Hitler conspiracy.
Born in 1906, Bonhoeffer received a strong moral and intellectual upbringing from his father, Karl, an eminent Berlin psychiatrist, and his devout mother, Paula. The family had a notable independent streak; Paula chose to home-school their eight children in their early years. ("Germans," she observed, "have their backbones broken twice in life: first in the schools, secondly in the military.") One morning in 1922, Dietrich was in school when he heard "a strange crackling" from the street. It was the assassination of Germany's Jewish foreign minister, Walter Rathenau, a crime the Bonhoeffers recognized as an omen. "Only think of the trouble we shall have later with these people," Bonhoeffer's brother Klaus wrote.
Enlarge Image 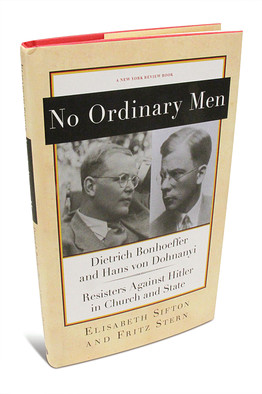 By Elisabeth Sifton and Fritz Stern
(New York Review Books, 157 pages, $19.95)
Dohnanyi, the son of a famous Hungarian composer, was childhood friends with the Bonhoeffers and later married one of Dietrich's sisters. While Hans began a brilliant career as a lawyer in the German civil service, Dietrich gained renown as a young theologian. Influenced by the Swiss master Karl Barth, who rejected the historicism of much academic theology and emphasized the transcendence of God across time and culture, Bonhoeffer sought to develop an account of how the Christian church could exercise leadership in an increasingly chaotic society. He finished his dissertation at 25, studied with the theologian and ethicist Reinhold Niebuhr during a year abroad in America, and began lecturing at the University of Berlin in 1931.
Two years later, Hitler barred "non-Aryans" from holding positions in the civil service, the academy or the clergy. While most church leaders dithered, the 27-year-old Dietrich published an important essay, "The Church and the Jewish Question," that subtly challenged the legitimacy of Nazi rule and argued that the church must not only help "those who have fallen beneath the wheel" but "at times halt the wheel itself."
Over the next few years, Ms. Sifton and Mr. Stern write, "virtually everything he did"—co-founding a league of anti-Nazi churches, developing relationships with Jewish and Catholic communities abroad—"set him against the Nazifying church authorities." By 1936 he was banned from lecturing at the University of Berlin. He retreated to the country estate of Finkenwalde, where he continued to mentor young pastors in secret and wrote a pointed tract called "The Cost of Discipleship." Two years later Finkenwalde was shut down on Heinrich Himmler's orders.
Meanwhile, Dohnanyi had become chief assistant to the minister of justice, a post that gave him invaluable cover and access to top-secret documents. As early as 1934, he began compiling records of Nazi atrocities, storing them in a safe at an army base outside Berlin. The events of Kristallnacht on Nov. 9, 1938—a spree of riots that destroyed more than 200 synagogues and led to the arrest of more than 30,000 Jews—only increased his determination to remain at the center of the resistance.
Dohnanyi came into contact with a circle of anti-Hitler army officers, and in 1939 he became a deputy in the Abwehr (military counterintelligence), a redoubt of anti-Nazi sentiment. Hans soon brought on board Bonhoeffer, who was to use his foreign contacts to gather intelligence for the resistance. Together they coordinated a daring rescue operation—brilliantly conceived by Dohnanyi—that allowed more than a dozen Jewish refugees to escape to Switzerland using false papers. Bonhoeffer called on Swiss friends, including Karl Barth, to help secure their passage.
It wasn't long, however, before the Gestapo had the pair in its sights, as more and more evidence linked them to the rescue operation and multiple failed attempts on Hitler's life. After they were arrested in early April 1943, their resistance took another form: withstanding isolation and harsh interrogations and refusing to name names. Both men found sustenance in their Bibles. And their families provided indispensable support, sending letters and packages with hidden messages that helped them coordinate their responses to questioning. Unbowed to the last, they were finally hanged in April 1945.
Among the books and films this story has inspired, Ms. Sifton and Mr. Stern's narrative stands out for its elegance, brevity and measured tone: exciting but not sensational, moving but not sentimental, erudite but not academic. It is also enriched by the authors' connections to some of its central figures and events. Ms. Sifton is the daughter of Reinhold Niebuhr, and Mr. Stern fled Nazi Germany as a child in the 1930s.
Bonhoeffer and Dohnanyi are sometimes celebrated as "martyrs." But in Ms. Sifton and Mr. Stern's telling, the two men never allowed themselves to speak of their sacrifices that way. In Dohnanyi's more modest formulation, they had simply taken "the path a decent person inevitably takes." And yet, as the authors soberingly conclude, "so few traveled that path—anywhere."
Mr. Kazam, a former Tikvah Fellow at The Wall Street Journal, is a student at Yale Law School.
Posted by jtf at 6:59 AM