The president may look incompetent on Syria. But his behavior fits his strategy to weaken America abroad.

By Norman Podhoretz
http://online.wsj.com/
September 9, 2013
It is entirely understandable that Barack Obama's way of dealing with Syria in recent weeks should have elicited responses ranging from puzzlement to disgust. Even members of his own party are despairingly echoing in private the public denunciations of him as "incompetent," "bungling," "feckless," "amateurish" and "in over his head" coming from his political opponents on the right.
For how else to characterize a president who declares war against what he calls a great evil demanding immediate extirpation and in the next breath announces that he will postpone taking action for at least 10 days—and then goes off to play golf before embarking on a trip to another part of the world? As if this were not enough, he also assures the perpetrator of that great evil that the military action he will eventually take will last a very short time and will do hardly any damage. Unless, that is, he fails to get the unnecessary permission he has sought from Congress, in which case (according to an indiscreet member of his own staff) he might not take any military action after all.
Enlarge Image 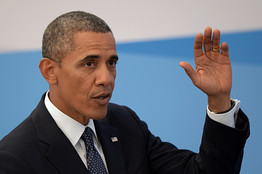 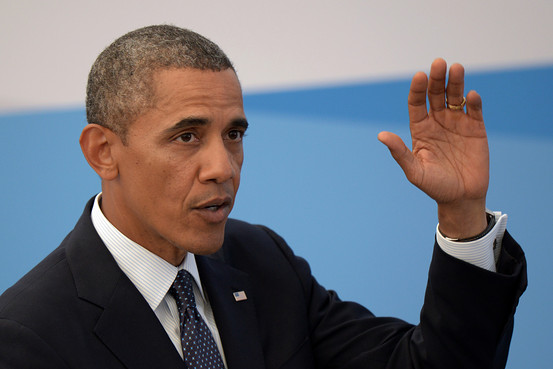 Getty Images
President Obama on Friday at the G-20 economic summit in St. Petersburg, Russia.
Summing up the net effect of all this, as astute a foreign observer as Conrad Black can flatly say that, "Not since the disintegration of the Soviet Union in 1991, and before that the fall of France in 1940, has there been so swift an erosion of the world influence of a Great Power as we are witnessing with the United States."
Yet if this is indeed the pass to which Mr. Obama has led us—and I think it is—let me suggest that it signifies not how incompetent and amateurish the president is, but how skillful. His foreign policy, far from a dismal failure, is a brilliant success as measured by what he intended all along to accomplish. The accomplishment would not have been possible if the intention had been too obvious. The skill lies in how effectively he has used rhetorical tricks to disguise it.
The key to understanding what Mr. Obama has pulled off is the astonishing statement he made in the week before being elected president: "We are five days away from fundamentally transforming the United States of America." To those of us who took this declaration seriously, it meant that Mr. Obama really was the left-wing radical he seemed to be, given his associations with the likes of the anti-American preacher Jeremiah Wright and the unrepentant terrorist Bill Ayers, not to mention the intellectual influence over him of Saul Alinsky, the original "community organizer."
So far as domestic affairs were concerned, it soon became clear—even to some of those who had persuaded themselves that Mr. Obama was a moderate and a pragmatist—that the fundamental transformation he had in mind was to turn this country into as close a replica of the social-democratic countries of Europe as the constraints of our political system allowed.
Since he had enough support for the policies that this objective entailed, those constraints were fairly loose, and so he only needed a minimum of rhetorical deception in pursuing it. All it took was to deny he was doing what he was doing by frequently singing the praises of the free-enterprise system he was assiduously working to undermine, by avoiding the word "socialism," by invoking "fairness" as an overriding ideal and by playing on resentment of the "rich."
But foreign policy was another matter. As a left-wing radical, Mr. Obama believed that the United States had almost always been a retrograde and destructive force in world affairs. Accordingly, the fundamental transformation he wished to achieve here was to reduce the country's power and influence. And just as he had to fend off the still-toxic socialist label at home, so he had to take care not to be stuck with the equally toxic "isolationist" label abroad.
This he did by camouflaging his retreats from the responsibilities bred by foreign entanglements as a new form of "engagement." At the same time, he relied on the war-weariness of the American people and the rise of isolationist sentiment (which, to be sure, dared not speak its name) on the left and right to get away with drastic cuts in the defense budget, with exiting entirely from Iraq and Afghanistan, and with "leading from behind" or using drones instead of troops whenever he was politically forced into military action.
The consequent erosion of American power was going very nicely when the unfortunately named Arab Spring presented the president with several juicy opportunities to speed up the process. First in Egypt, his incoherent moves resulted in a complete loss of American influence, and now, thanks to his handling of the Syrian crisis, he is bringing about a greater diminution of American power than he probably envisaged even in his wildest radical dreams.
For this fulfillment of his dearest political wishes, Mr. Obama is evidently willing to pay the price of a sullied reputation. In that sense, he is by his own lights sacrificing himself for what he imagines is the good of the nation of which he is the president, and also to the benefit of the world, of which he loves proclaiming himself a citizen.
The problem for Mr. Obama is that at least since the end of World War II, Americans have taken pride in being No. 1. Unless the American people have been as fundamentally transformed as their country is quickly becoming, America's decline will not sit well. With more than three years in office to go, will Mr. Obama be willing and able to endure the continuing erosion of his popularity that will almost certainly come with the erosion of the country's power and influence?
No doubt he will either deny that anything has gone wrong, or failing that, he will resort to his favorite tactic of blaming others—Congress or the Republicans or Rush Limbaugh. But what is also almost certain is that he will refuse to change course and do the things that will be necessary to restore U.S. power and influence.
And so we can only pray that the hole he will go on digging will not be too deep for his successor to pull us out, as Ronald Reagan managed to do when he followed a president into the White House whom Mr. Obama so uncannily resembles.
Mr. Podhoretz was the editor of Commentary from 1960-95. His most recent book is "Why Are Jews Liberals?" (Doubleday, 2009).


A version of this article appeared September 9, 2013, on page A15 in the U.S. edition of The Wall Street Journal, with the headline: Obama's Successful Foreign Failure.
Posted by jtf at 10:40 PM