By George F. Will, Published: August 14 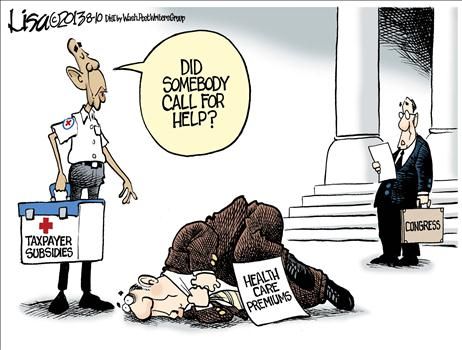 President Obama’s increasingly grandiose claims for presidential power are inversely proportional to his shriveling presidency. Desperation fuels arrogance as, barely 200 days into the 1,462 days of his second term, his pantry of excuses for failure is bare, his domestic agenda is nonexistent and his foreign policy of empty rhetorical deadlines and red lines is floundering. And at last week’s news conference he offered inconvenience as a justification for illegality.
Explaining his decision to unilaterally rewrite the Affordable Care Act (ACA), he said: “I didn’t simply choose to” ignore the statutory requirement for beginning in 2014 the employer mandate to provide employees with health care. No, “this was in consultation with businesses.”
He continued: “In a normal political environment, it would have been easier for me to simply call up the speaker and say, you know what, this is a tweak that doesn’t go to the essence of the law. . . . It looks like there may be some better ways to do this, let’s make a technical change to the law. That would be the normal thing that I would prefer to do. But we’re not in a normal atmosphere around here when it comes to Obamacare. We did have the executive authority to do so, and we did so.”
Serving as props in the scripted charade of White House news conferences, journalists did not ask the pertinent question: “Wheredoes the Constitution confer upon presidents the ‘executive authority’ to ignore the separation of powers by revising laws?” The question could have elicited an Obama rarity: brevity. Because there is no such authority.
Obama’s explanation began with an irrelevancy. He consulted with businesses before disregarding his constitutional dutyto “take care that the laws be faithfully executed.” That duty does not lapse when a president decides Washington’s “political environment” is not “normal.”
When was it “normal”? The 1850s? The 1950s? Washington has been the nation’s capital for 213 years; Obama has been here less than nine. Even if he understood “normal” political environments here, the Constitution is not suspended when a president decides the “environment” is abnormal.
Neither does the Constitution confer on presidents the power to rewrite laws if they decide the change is a “tweak” not involving the law’s “essence.” Anyway, the employer mandate is essential to the ACA.
Twenty-three days before his news conference, the House voted 264 to 161, with 35 Democrats in the majority, for the rule of law — for, that is, the Authority for Mandate Delay Act. It would have done lawfully what Obama did by ukase. He threatened to veto this use of legislation to alter a law. The White House called it “unnecessary,” presumably because he has an uncircumscribed “executive authority” to alter laws.
In a 1977 interview with Richard Nixon, David Frost asked: “Would you say that there are certain situations . . . where the president can decide that it’s in the best interests of the nation . . . and do something illegal?”
Nixon: “Well, when the president does it, that means it is not illegal.”
Frost: “By definition.”
Nixon: “Exactly, exactly.”
Nixon’s claim, although constitutionally grotesque, was less so than the claim implicit in Obama’s actions regarding the ACA. Nixon’s claim was confined to matters of national security or (he said to Frost) “a threat to internal peace and order of significant magnitude.” Obama’s audacity is more spacious; it encompasses a right to disregard any portion of any law pertaining to any subject at any time when the political “environment” is difficult.
Obama should be embarrassed that, by ignoring the legal requirement concerning the employer mandate, he has validated critics who say the ACA cannot be implemented as written. What does not embarrass him is his complicity in effectively rewriting the ACA for the financial advantage of self-dealing members of Congress and their staffs.
The ACA says members of Congress (annual salaries: $174,000) and their staffs (thousands making more than $100,000) must participate in the law’s insurance exchanges. It does not say that when this change goes into effect, the current federal subsidy for this affluent cohort — up to 75 percent of the premium’s cost, perhaps $10,000 for families — should be unchanged.
When Congress awakened to what it enacted, it panicked: This could cause a flight of talent, making Congress less wonderful. So Obama directed the Office of Personnel Management, which has no power to do this, to authorize for the political class special subsidiesunavailable for less privileged and less affluent citizens.
If the president does it, it’s legal? “Exactly, exactly.”
Read more from George F. Will’s archive or follow him on Facebook.
Read more on this topic:
George F. Will: Obama’s never-mind presidency
Ruth Marcus: The real hurdles in Obamacare
The Post’s View: Delaying part of the Affordable Care Act is not a death knell
Posted by jtf at 5:22 AM