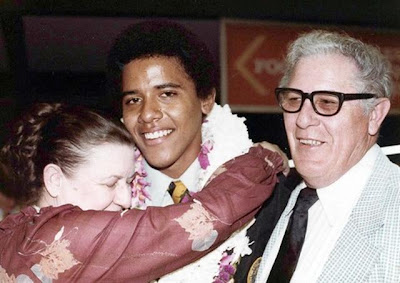 Courtesy of David Maraniss' new book, we now know that yet another key prop of Barack Obama's identity is false: His Kenyan grandfather was not brutally tortured or even non-brutally detained by his British colonial masters. The composite gram'pa joins an ever-swelling cast of characters from Barack's "memoir" who, to put it discreetly, differ somewhat in reality from their bit parts in the grand Obama narrative. The best friend at school portrayed in Obama's autobiography as "a symbol of young blackness" was, in fact, half Japanese, and not a close friend. The white girlfriend he took to an off-Broadway play that prompted an angry post-show exchange about race never saw the play, dated Obama in an entirely different time zone, and had no such world-historically significant conversation with him. His Indonesian step-grandfather, supposedly killed by Dutch soldiers during his people's valiant struggle against colonialism, met his actual demise when he "fell off a chair at his home while trying to hang drapes."

David Maraniss is no right-winger, and can't understand why boorish nonliterary types have seized on his book as evidence that the president of the United States is a Grade A phony. "It is a legitimate question about where the line is in memoir," he told Soledad O'Brien on CNN. My Oxford dictionary defines "memoir" as "an historical account or biography written from personal knowledge." And if Obama doesn't have "personal knowledge" of his tortured grandfather, war-hero step-grandfather and racially obsessed theater-buff girlfriend, who does? But in recent years, the Left has turned the fake memoir into one of the most prestigious literary genres: Oprah's Book Club recommended James Frey's "A Million Little Pieces," hailed by Bret Easton Ellis as a "heartbreaking memoir" of "poetic honesty," but subsequently revealed to be heavy on the "poetic" and rather light on the "honesty." The "heartbreaking memoir" of a drug-addled street punk who got tossed in the slammer after brawling with cops while high on crack with his narco-hooker girlfriend proved to be the work of some suburban Pat Boone type with a couple of parking tickets. (I exaggerate, but not as much as he did.)

Oprah was also smitten by "The Education of Little Tree," the heartwarmingly honest memoir of a Cherokee childhood which turned out to be concocted by a former Klansman whose only previous notable literary work was George Wallace's "Segregation Forever" speech. "Fragments: Memories of a Wartime Childhood" is a heartbreakingly honest, poetically searing, searingly painful, painfully honest, etc., account of Binjamin Wilkomirski's unimaginably horrific boyhood in the Jewish ghetto of Riga and the Nazi concentration camp at Auschwitz. After his memoir won America's respected National Jewish Book Award, Mr. Wilkomirski was inevitably discovered to have been born in Switzerland and spent the war in a prosperous neighborhood of Zurich being raised by a nice middle-class couple. He certainly had a deprived childhood, at least from the point of view of a literary agent pitching a memoir to a major publisher. But the "unimaginable" horror of his book turned out to be all too easily imagined. Fake memoirs have won the Nobel Peace Prize and are taught at Ivy League schools to the scions of middle-class families who take on six-figure debts for the privilege ("I, Rigoberta Menchu"). They're handed out by the Pentagon to senior officers embarking on a tour of Afghanistan (Greg Mortenson's "Three Cups of Tea") on the entirely reasonable grounds that a complete fantasy could hardly be less credible than current NATO strategy.

In such a world, it was surely only a matter of time before a fake memoirist got elected as president of the United States. Indeed, the aforementioned Rigoberta Menchu ran as a candidate in the 2007 and 2011 presidential elections in Guatemala, although she got knocked out in the first round – Guatemalans evidently being disinclined to elect someone to the highest office in the land with no accomplishment whatsoever apart from a lousy fake memoir. Which just goes to show what a bunch of unsophisticated rubes they are.

In an inspired line of argument, Ben Smith of the website BuzzFeed suggests that the controversy over "Dreams From My Father" is the fault of conservatives who have "taken the self-portrait at face value." We are so unlettered and hicky that we think a memoir is about stuff that actually happened rather than a literary jeu d'esprit playing with nuances of notions of assumptions of preconceptions of concoctions of invented baloney. And so we regard the first member of the Invented-American community to make it to the White House as a kinda weird development rather than an encouraging sign of how a new post-racial, post-gender, post-modern America is moving beyond the old straitjackets of black and white, male and female, gay and straight, real and hallucinatory.

The question now is whether the United States itself is merely the latest chapter of Obama's fake memoir. You'll notice that, in the examples listed above, the invention only goes one way. No Cherokee orphan, Holocaust survivor or recovering drug addict pretends to be George Wallace's speechwriter. Instead, the beneficiaries of boring middle-class Western life seek to appropriate the narratives and thereby enjoy the electric frisson of fashionable victim groups. And so it goes with public policy in the West at twilight.

Thus, Obama's executive order on immigration exempting a million people from the laws of the United States, is patently unconstitutional, but that's not how an NPR listener looks at it: To him, Obama's unilateral amnesty enriches stultifying white-bread America with a million plucky little Rigoberta Menchus and their heartbreaking stories. Eric Holder's entire tenure as attorney general is a fake memoir all by itself, and his invocation of "executive privilege" in the Fast & Furious scandal is preposterous, but American liberals can't hear: Insofar as they know anything about Fast & Furious, it's something to do with the government tracking the guns of fellows like those Alabama "Segregation Forever" nuts, rather than a means by which hundreds of innocent Rigoberta Menchus south of the border were gunned down with weapons sold to their killers by liberal policy-makers of the Obama administration. If that's the alternative narrative, they'll take the fake memoir.

Similarly, Obamacare is apparently all about the repressed patriarchal white male waging his "war on women." The women are struggling 30-year-old Georgetown Law coeds whose starting salary after graduation is 140 grand a year, but let's not get hung up on details. Dodd-Frank financial reform, also awaiting Supreme Court judgment, is another unconstitutional power grab, but its designated villains are mustache-twirling top-hatted bankers, so, likewise, who cares?

One can understand why the beneficiaries of the postwar West's expansion of middle-class prosperity would rather pass themselves off as members of way-cooler victim groups: it's a great career move. It may even have potential beyond the page: See Sandra Fluke's dazzling pre-Broadway tryout of "Fake Memoir: The High School Musical," in which a 30-year-old Georgetown Law coed whose starting salary after graduation is 140 grand a year passes herself off as the Little Rigoberta Hussein Wilkomirski of the Rite-Aid pick-up line. But transforming an entire nation into a fake memoir is unlikely to prove half so lucrative. The heartwarming immigrants, the contraceptive-less coeds, the mustache-twirling bankers all provide cover for a far less appealing narrative: an expansion of centralized power hitherto unknown to this republic. In reality, Obama's step-grandfather died falling off the chair while changing the drapes. In the fake-memoir version, Big Government's on the chair, and it's curtains for America.