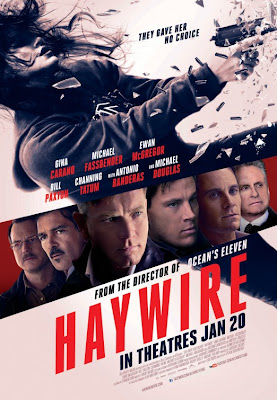 There's a point in Haywire when the film's protagonist, ex-Marine Mallory Kane (Gina Carano), gone rogue from her job as hired muscle for a private government subcontractor, takes a fall while scaling down a drainpipe and hits the ground with a crunch that knocks the wind out of you.

It's a short drop, but that landing hurts. As cartoonish live-action and photorealistic cartoons reign at the multiplex, all but obsoleting the laws of gravity, Haywire puts the impact back into screen violence, brings it back to earth.

Haywire's plot is boilerplate triple-cross, cloak-and-dagger stuff, written in pulpy blank verse by The Limey screenwriter Lem Dobbs, picking up with his old collaborator, director Steven Soderbergh, who evinces a second-sense ability to frame every shot for maximal effect. Mallory is introduced evading her old employer's attempt to corral her, in a scene that establishes the film's tendency to ambush assault. After half-kidnapping a teenage escape driver, she flashes back to the hectic last week that has put her on the lam: two jobs that shuttled her between Barcelona and Dublin and ended in a setup.

Mallory looks for answers from her boss and former lover, Kenneth, played by Ewan McGregor; the rest of his network is played by famous faces, including shadowy operative Antonio Banderas; Channing Tatum as Mallory's sometimes partner, Aaron; Michael Douglas as Kenneth's liaison to Washington; and Michael Fassbender as a freelance agent, Paul, with whom Mallory is reluctantly partnered. Haywire is, however, very much a vehicle for Carano, the retired MMA fighter and former American Gladiator regular, now appearing in her first film. The casting is more than a stunt, for Haywire makes full use of Carano's particular physical capabilities (something decidedly not true of porn star Sasha Grey's casting in Soderbergh's The Girlfriend Experience). There are several long, unbroken shots of Carano hustling along city streets in foot chases and bounding across rooftops like a muscular Irma Vep, and, of course, there are fights. Soderbergh makes ingenious use of confined spaces—corridors, hotel rooms, the narrow aisle of a boxcar diner—with combatants using walls for leverage and as ready bludgeons. The music of fist on face, the punting kicks, all have a rib-cracking resonance that recalls the days when Phil Karlson (Walking Tall) was directing actioners.

Carano is also photogenic: The symmetry of her sharp features has survived her fighting days, though she carries a scar on her jawline as a souvenir. This is important because Haywire is, after a fashion, a slapstick-violent, mercenary sex comedy, with Mallory romantically involved, however fleetingly, with each of her major opponents in turn: In addition to her history with Kenneth, she has an on-the-job FWB relationship with Aaron, while she's attached to Paul as a decoy date. ("MI6 wants me to be eye candy?" she asks, incredulous.) The combat duets don't have the weight of moral outrage behind Karlson's punch, but, as Soderbergh jauntily outlines the combatant's business/pleasure interactions, each fight takes on an individual chemistry, as any couple does. With Aaron, it's a brutal spat. The prelude to their confrontation—him hungover, Mallory marked up—reads like an abusive boyfriend coming to collect his woman, an assumption that Soderbergh quickly upends. Mallory's outing with Paul is a parody of a swank first date, complete with a consummation in which he gets more than he bargained for. (The only bit that doesn't quite register is Mallory impersonally dispatching two Irish Gardaí officers, precisely because it's impersonal.)

Where faux-empowering The Girl With the Dragon Tattoo confines sexual power play to the old rape-revenge matrix, Haywire is a real war-of-the-sexes tournament, briskly paced with a tickling sense of black humor. (One encounter concludes with a smothering thigh lock that leaves its victim with a priceless sated and insensate expression before his black-widow goodnight kiss.) In contrast to Rooney Mara's overkill Hot Topic pout, Carano can play dom femme and express vulnerability, backed up by her physique.

How'd she get so tough? Bill Paxton shows up as Mallory's ex-leatherneck father, teasing the pop-psych explanation that she has never found somebody who can measure up to Daddy—but Daddy's expression when witnessing Mallory at work shows he knows he has been surpassed. Mallory might find her culprit, but she doesn't find anyone on her level. 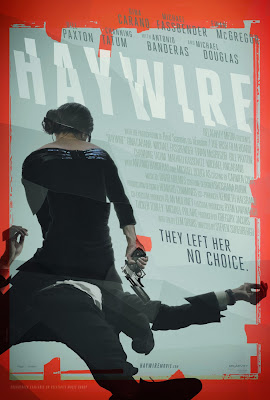 Mallory Kane, the heroine of "Haywire," is a splendid example of the character type. Her first name springs from a Latin root for evil, and her last name evokes associations with British pornography ("Strict instruction for naughty schoolboys. Call Miss Kane"). Steven Soderbergh's latest film is a thriller that has next to nothing to do with sex, except as an implement of distraction, but under the surface, there's an appeal coiling to that part of many men that feels kinda needy about Lara Croft.

Mallory is played by Gina Carano, a retired mixed martial arts fighter. Her range is suggested by having placed No. 5 on a Most Influential Women list on Yahoo! and No. 16 on Maxim's Hot 100. On the basis of "Haywire," I expect her to become a considerable box-office success, because the fact is, within a limited range, she's good. In the movie's first scene, she walks into a little cafe in upstate New York, sits down, sips a little tea and had me hooked. She has the no-nonsense beauty of a Noomi Rapace, Linda Fiorentino or Michelle Monaghan.

She plays an employee of a murky special contractor of the U.S. government; it's a firm that specializes in performing dirty work on assignment. Its own agents and enemy agents, who sometimes seem interchangeable, spend a great deal of time deceiving and double-crossing one another, and Mallory discovers during the course of the film that (spoiler, I guess) she can't trust anyone. Why so many people want to kill her is a mystery, because she is so gifted at her job.

Carano is wonderfully athletic, which is just as well, because she spends most of the film being wonderful athletic. Although you never know in this age of special affects exactly what is real in a martial arts scene, let it be said she really does seem to be personally performing some impressive fight moves; there are the same elegant moments we remember from Bruce Lee and Jackie Chan, who were blindingly fast and ingenious in the way they improvised using walls, angles, furniture and the bodies of others.

Soderbergh is a master craftsman whose work moves almost eagerly between genres. This is his first martial arts film, and he correctly assumes that the audience isn't interested in hearing a lot of dialogue. Lesser directors would use that as an excuse to rely entirely on action and lowball the words. Not Soderbergh and his screenwriter, Lem Dobbs, who wrote "Dark City," is the son of the famous painter R.B. Kitaj and lifted his pen name from the Bogart character in "Treasure of the Sierra Madre."

What they do is craft very precise words for a large group of supporting characters and fill those roles with surprisingly big names. The result is that the film (although its plot is preposterous nonsense) has weight and heft and places Mallory at the center of a diabolical labyrinth. Consider that a relatively little-known actress co-stars with Michael Fassbender, Ewan McGregor, Bill Paxton, Channing Tatum, Antonio Banderas and Michael Douglas, and you realize that (1) Carano can hold her own, and (2) like Woody Allen, Soderbergh is one of those directors who can get just about anybody he wants to act in his movies.

I call the plot nonsense. Ask yourself this: How could any organization or "contractor" survive for long with the death rate we see here? At the end of a year, no one would be left alive, except a few mail-room clerks. Soderbergh seems to be amusing himself with the variety of his locations: Barcelona, Dublin, New Mexico, New York State and executive offices in unnamed cities. A film like "Haywire" has no lasting significance, but it's a pleasure to see an A-list director taking the care to make a first-rate genre thriller. 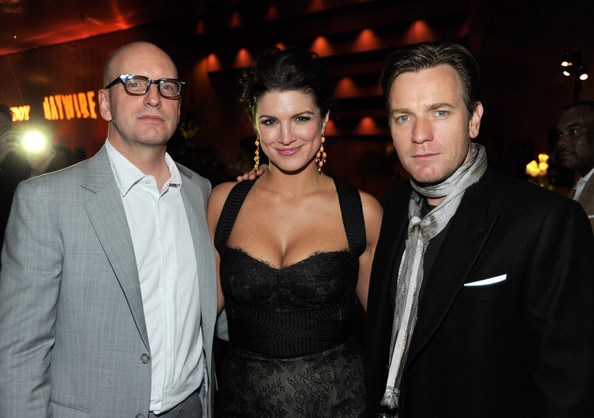 ( January 4, 2012 - Photo by Frazer Harrison/Getty Images North America) more pics from this album »
Into the cinematic dead zone of January comes Haywire to kick off the new movie year on a sexy action high. I shouldn't be surprised, since Steven Soderbergh, the Oscar-winning director of Traffic, is the prankster behind the camera. This is Soderbergh working lean and mean outside the mainstream comforts of the Ocean's franchise. Shooting digitally on the 4K Red One camera, Soderbergh gives Haywire B-movie oomph without sacrificing his fluid elegance. Plus, there's no keeping your eyes off his star attraction. She's Gina Carano, 29, the face of women's mixed martial arts and just the five-foot-eight cage fighter you need to beat the crap out of male movie stars, such as Ewan McGregor, Michael Fassbender and Channing Tatum.
OK, Carano's on-camera experience has been limited to crushing the competition on NBC's American Gladiators. But she more than holds her own with the big boys, including evil suits played by Antonio Banderas and Michael Douglas. Did I mention that Haywire is a spy thriller? It is, and the nonstop dazzle and momentum are boosted by frisky camerawork and editing by Soderbergh under the aliases of Peter Andrews and Mary Ann Bernard (don't ask).
Carano plays Mallory Kane, a covert-ops specialist who finds her shady government bosses are out to whack her. Dumb move. This Muay Thai kickboxer and weapons expert doesn't go down easy, not even when her chief contact, Kenneth (McGregor, thoroughly enjoying his slide into slimeball villainy), pulls out all the stops.


Lem Dobbs (The Limey, Kafka) sparks his script with droll wit, but I wouldn't bother much with the plot details. As the scene shifts across the globe, propelled by a vibrant David Holmes score, Mallory is the only guide we need. Carano is poetry in kickass motion, as she and ex-lover Aaron (Tatum) duke it out in a rundown diner. This leads to a flashback of Mallory and Aaron teaming up in Barcelona to rescue a Chinese journalist. Just when you think Soderbergh can't top himself for pyrotechnics, Mallory – decked out in heels and designer wear – tangles with Paul (Fassbender, oozing subversive charm), a partner she's meant to trust. Ha! The two destroy a posh Dublin hotel room, and Soderbergh can't contain his joy. Why should he? And why should we? As foxy Mallory takes on her enemies in the beach house she shares with her father (Bill Paxton), Haywire comes close to achieving Soderbergh's goal of creating "a Pam Grier movie made by Alfred Hitchcock."