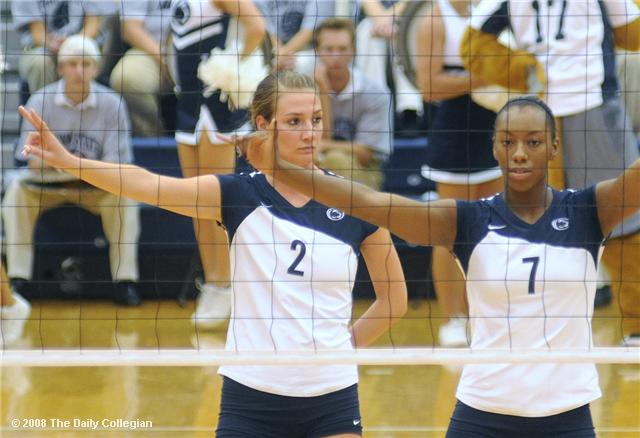 No matter if Katie Kabbes is competing on the floor, or watching her teammates from the sideline, she has the same smile on her face.

And for the last time in the regular season for her collegiate career, Kabbes will bring that smile to Rec Hall this weekend.

No. 12 Penn State will face Indiana at 7 tonight and then square off with No. 8 Purdue Saturday at the same time for senior night.

Kabbes is one the Nittany Lions’ two seniors, along with defensive specialist Megan Shifflett, and the duo are part of an exclusive club of college athletes that have won at least three national championships.

“It’s kind of surreal that it’s coming to an end, it’s flown by. But it’s been far more than I’ve ever expected,” Kabbes said. “To compete at a high level of volleyball at a great university, and to represent this school has been a dream for me.”

The outside hitter from Raleigh, N.C. has played behind Penn State greats and All-Americans throughout her career, and Kabbes has been in and out of coach Russ Rose’s starting lineup this season. But Rose noted that Kabbes always brings a positive attitude to the team.

“The thing I like most about Katie is that she still has the same smile on her face and she still has that little sparkle in her eye that means she's up to something,” Rose said. “And she's been that way every day.”

Standing at 6-foot-4 and with two older sisters, Lindsey and Kelly, that both played collegiate volleyball, the sports would seem like a no-brainer for Kabbes. However, that was not the case for Kabbes, who got into dancing early in life and didn’t really get into sports until she was in middle school.

Dawn Kabbes, Katie’s mother, said her daughter started playing basketball and was surprised on how dominant she was in community leagues. Then, in sixth grade, Katie began playing volleyball and eventually it became her sport.

“We never even thought she had that competitive bone. Then, all of a sudden, she came home one day and said ‘I want to play basketball,’ ” Dawn said. “She obviously learned something from following her siblings around a gym, then it gravitated towards volleyball.” 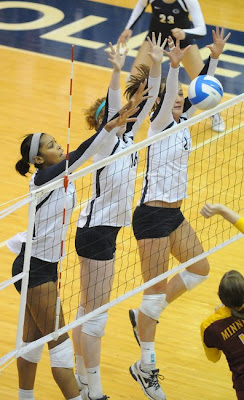 Kabbes stared at Cardinal Gibbons High School where she helped her team win three straight state championships from 2005-07. She ended up being the school’s career leader in kills with 1,500 and had her jersey retired.

In addition to playing in high school, Kabbes also competed in club volleyball and was on the Junior Olympic National Team, competing with and against some of the country’s best young volleyball players. Kabbes was able to keep a solid relationship with many of the girls she played with and now faces at the college level, which impresses her mother.

“The thing that stands out the most to me is how she’s maintained those friendships. Usually those girls are competing against each other so much, that they don’t really like each other,” Dawn said. “But it’s just the opposite with Katie, and that’s what's fun for me, it’s those friendships.”

After high school and club, Kabbes decided to come to Happy Valley and play for Rose and Penn State. So far over her career she has recorded 190 kills and has exactly 100 total blocks in a Penn State uniform. Her teammates say that Kabbes contributes both on and off the court.

“Katie has played with some great players that have come through the program, so she understands the hard work they did and she can pass it on to us,” sophomore middle hitter Katie Slay said. “Off the court, Katie never ceases to make me laugh. She's always having a good time; she's just like the bright part of your day.”

When asked what her favorite moment at Penn State was, Kabbes had to think very hard about it, and eventually decided on the 2009 national championship match when the Lions battled out of an 0-2 hole to defeat Texas 3-2 and win the title.

Kabbes had an even tougher time coming up with her favorite memory with Shifflett, and couldn’t pinpoint one single memory because she said there were too many.

The two competed against one another in club volleyball before they arrived at Penn State and have been living together since their freshman year. Kabbes also said the two sometimes take road trips together on weekends when they’re not playing.

“It’s sad that after this we’ll be parting ways. But we’ll always be close because we’ve been through four years of lots of ups and downs and she’s always been there for me. She’s my best friend here,” Kabbes said. “It’s going to be really bittersweet to go through senior night with her.”

Katie’s mother said that Katie was born four weeks early and “hit the ground running from the minute she arrived.” Dawn also mentioned Katie has the ability to make everyone around her laugh and has only seen her daughter cry three or four times in her life.

“She’s positive in everything,” Dawn said. “She’s full of life, full of humor. That’s Katie. I’ve always said the world is her stage.”

Kabbes is scheduled to graduate in December and wants to continue her volleyball career after graduating by playing professionally somewhere abroad. Kabbes also said that if volleyball doesn’t work out she might attend graduate school or attempt coaching the sport she loves.

Regardless of what happens after college, Kabbes said she has enjoyed her time Penn State and the relationships she has built with her coaches and teammates.

“This whole experience is bigger than me and I think that are some key attitudes to have a successful team. I knew coming here that I would have to fight for everything that I got and I’ve learned so much about myself as a person doing that and I didn’t want anything to be handed to me,” Kabbes said. “I’ve been on the bench and I’ve been a starter, so I’ve really had the whole spectrum of Penn State volleyball. You get to choose how your attitude is every day when you come into practice and if you have a bad attitude, it’s going to be miserable, and that’s not my outlook on life. I want to make the most out of everything I’m doing, and it’s easy when I’m with girls that I love and coaches that I love and the sport that I love. I could never have a bad attitude about anything in this program.”
Posted by jtf at 5:28 AM