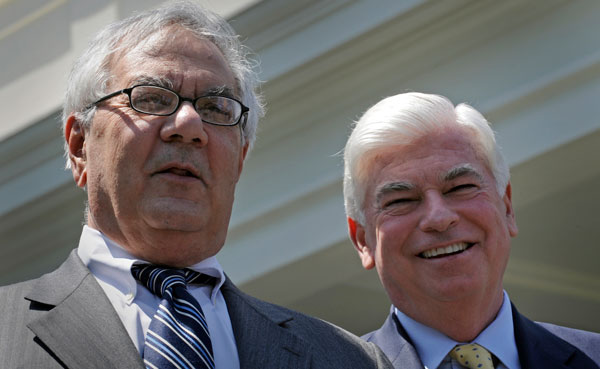 Not if the “mainstream” media has anything to do with it, that is.

After his announcement that he won’t seek reelection, the Washington Post heralded the disheveled congressman Barney Frank​ as leaving a “legacy that crosses from legislative cornerstones to political confrontations to a historic place as the nation’s most prominent gay lawmaker.”

The paper continued: “On the left, Frank was a hero both for his effort to rein in the nation’s largest banks and for his role in promoting gay rights, having been the first member of Congress to declare his sexual orientation while in office.”

Then there’s the New York Times. To them, even Frank’s opponents carried a great deal of respect for the rambling Massachusetts politician. While “bankers often disagreed with Mr. Frank’s policies,” said the Times, “many respected his command of arcane areas of finance, a rarity on Capitol Hill.”

Get a room, boys.

The Times also noted that the “pugnacious lawmaker was quick to lambaste the industry in the aftermath of the financial crisis, and was loathe to apologize when bankers complained about the harsh tone.”

Unlike the Times, the Washington Post did mention Frank’s, er, interesting partner choices over the years, one that resulted in the infamous “allegations involving his relationship with a male prostitute who worked out of the lawmaker’s Capitol Hill townhouse.” (Side note: The Washington Post frames the boyfriend as someone who “worked” out of Barney’s house? I guess that’s one way to put it. Another was that Barney Frank’s Washington, D.C., apartment was also operating as gay brothel, of which Frank denies he had any knowledge. Snort.)

But what both the Times and the Post conveniently leave out is how Barney Frank was vociferously supportive of increasing home ownership among folks who should’ve never bought a home in the first place, a policy that injected steroids into the housing bubble and eventually collapsed the financial sector.

And because Barney’s boys in the mainstream media omit his role in the housing crisis that ricocheted across the world in 2008, it’s time for us to go back to the videotape.

When Barney was the ranking member of the House Financial Services Committee, he outright dismissed the fact that the two lending giants Fannie Mae​ and Freddie Mac were facing grave solvency issues. To the contrary, he argued before the committee that such claims were embellishments.

“I worry, frankly, that there's a tension here. The more people, in my judgment, exaggerate a threat of safety and soundness, the more people conjure up the possibility of serious financial losses to the Treasury, which I do not see,” babbled Frank. “I think we see entities that are fundamentally sound financially and withstand some of the disaster scenarios.”

Fast-forward to today: The American people had to shell out $700 billion in bailout money, are still on the hook for Fannie and Freddie, and got a huge regulatory bomb called “Dodd–Frank Wall Street Reform and Consumer Protection” dropped on an American economy already overtaxed and overregulated.

The media’s free pass to the slobbering congressman is even more egregious because Frank wasn’t just defending the status quo. He was pushing for Fannie and Freddie to accelerate the flow of risky loans.

“I would like to get Fannie and Freddie more deeply into low-income housing and possibly moving into something that is more explicitly a subsidy,” drooled Frank in a House Financial Services Committee hearing back in 2003. “I want to roll the dice a little bit more in this situation toward subsidized housing,” he added.

And when the GOP tried bringing attention to the fact that politicians should be more vigilant (not “roll the dice”) with taxpayer money, Frank allowed his comrades on the House Financial Services Committee to accuse Republicans of conducting a “political lynching” of Franklin Raines​, the former chairman of Fannie Mae who engaged in accounting fraud and raked in a whopping $91 million in compensation and bonuses in the process.

Yes, this scam artist who nearly topped off $100 million at Fannie Mae by cooking its books was being “lynched” by Republicans for making inquiries into Fannie’s viability.

Now that’s some lib logic for you!

The media will blow wet kisses at Barney Frank’s political career, a sad fact considering that he spent his days in Washington gambling away the money you and I work for as though he were playing a cheap slot machine in the Vegas airport.

Mr. Mattera is the editor of HUMAN EVENTS and the author of Obama Zombies: How the Liberal Machine Brainwashed My Generation (Simon & Schuster). He also hosts The Jason Mattera Show on News Talk Radio 77WABC. Previously, he was the Spokesman for Young America's Foundation and a TV correspondent for Michelle Malkin. Follow Jason on Twitter, Facebook, and YouTube.
Posted by jtf at 5:52 AM