Depraved but not Deprived 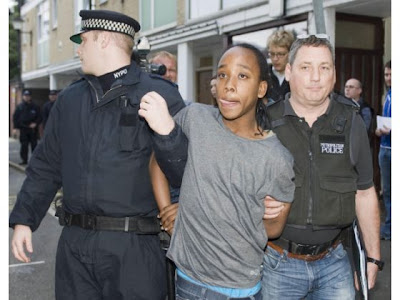 Unlike many of my comrades in the punditry game, I don't do a lot of TV. But I'm currently promoting my latest doom-mongering bestseller so I'm spending more time than usual on the telly circuit. This week I was on the BBC's current-affairs flagship "Newsnight." My moment in the spotlight followed a report on the recent riots in English cities, in the course of which an undercover reporter interviewed various rioters from Manchester who'd had a grand old time setting their city ablaze and expressed no remorse over it. There then followed a studio discussion, along the usual lines. The host introduced a security guard who'd fought for Queen and country in Afghanistan and Bosnia and asked whether he sympathized with his neighbors. He did. When you live in an "impoverished society," he said, "people do what they have to do to survive."

When we right-wing madmen make our twice-a-decade appearance on mainstream TV, we're invariably struck by how narrow are the bounds of acceptable discourse in polite society. But in this instance I was even more impressed by how liberal pieties triumph even over the supposed advantages of the medium. Television, we're told, favors strong images – Nixon sweaty and unshaven, Kennedy groomed and glamorous, etc. But, in this instance, the security guard's analysis, shared by three-quarters of the panel, was entirely at odds with the visual evidence: There was no "impoverished society." The preceding film had shown a neat subdivision of pleasant red-brick maisonettes set in relatively landscaped grounds. There was grass, and it looked maintained. Granted, it was not as bucolic as my beloved New Hampshire, but, compared to the brutalized concrete bunkers in which the French and the Swedes entomb their seething Muslim populations, it was nothing to riot over. Nonetheless, someone explained that these riotous Mancunian youth were growing up in "deprivation," and the rioters themselves seemed disposed to agree. Like they say in "West Side Story," "I'm depraved on account of I'm deprived." We've so accepted the correlation that we don't even notice that they're no longer deprived, but they are significantly more depraved.

In fact, these feral youth live better than 90 percent of the population of the planet. They certainly live better than their fellow youths halfway around the world who go to work each day in factories across China and India to make the cool electronic toys young Westerners expect to enjoy as their birthright. In Britain, as in America and Europe, the young take it for granted that this agreeable division of responsibilities is as permanent a feature of life as the earth and sky: Rajiv and Suresh in Bangalore make the state-of-the-art gizmo, Kevin and Ron in Birmingham get to play with it. That's just the way it is. And, because that's the way it is, Kevin and Ron and the welfare state that attends their every need assume 'twill always be so.

To justify their looting, the looters appealed to the conventional desperation-of-deprivation narrative: They'd "do anything to get more money." Anything, that is, except get up in the morning, put on a clean shirt and go off to do a day's work. That concept is all but unknown to the homes in which these guys were raised. Indeed, "Newsnight" immediately followed the riot discussion with a report on immigration to Britain from Eastern Europe. Any tourist in London quickly accepts that, unless he hails a cab or gets mugged, he will never be served by a native Londoner: Polish baristas, Balkan waitresses, but, until the mob shows up to torch his hotel, not a lot of Cockneys. A genial Member of Parliament argued that the real issue underlying the riots is "education and jobs," but large numbers of employers seem to have concluded that, if you've got a job to offer, the best person to give it to is someone with the least exposure to a British education.

The rioters, meanwhile, have a crude understanding of how the system works. The proprietor of a Bang & Olufsen franchise revealed that the looters had expressed mystification as to why he objected to them stealing his goods. After all, he was insured, wasn't he? So the insurance would pay for his stolen TVs and DVD players, wouldn't it? The notion that, ultimately, someone has to pay for the insurance seemed to elude them, in the same way it seems to elude our elites that ultimately someone has to pay for Britain's system of "National Insurance" – or what Canada calls "Social Insurance" and America calls "Social Security."

The problem for the Western world is that it has incentivized nonproductivity on an industrial scale. For large numbers at the lower end of the spectrum (still quaintly referred to by British reporters as "working class") the ritual of work – of lifetime employment as a normal feature of life – has been all but bred out by multigenerational dependency. At the upper end of the spectrum, too many of us seem to regard an advanced Western society as the geopolitical version of a lavishly endowed charitable foundation that funds somnolent programming on NPR. I was talking to a trustiefundie Vermont student the other day who informed me her ambition is to "work for a non-profit."

"What kind of ambition is that?" I said, a little bewildered. But she meant it, and so do most of her friends. Doesn't care particularly what kind of "non-profit" it is: As long as no profits are involved, she's eager to run up a six-figure college debt for a piece of the non-action. The entire state of Vermont is becoming a non-profit. And so in a certain sense is an America that's 15 trillion dollars in the hole, and still cheerfully spending away.

In between the non-profit class and the non-working class, we have diverted too much human capital into a secure and undemanding bureaucracy-for-life: President Barack Obama has further incentivized statism as a career through his education "reforms," under which anyone who goes into "public service" will have their college loans forgiven after 10 years.

As I point out in my book, in the last six decades the size of America's state and local government workforce has increased over three times faster than the general population. Yet Obama says it's still not enough: The bureaucracy needs even more of our manpower. Up north, Canada is currently undergoing a festival of mawkish sub-Princess Di grief-feasting over the death from cancer of the Leader of Her Majesty's Loyal Opposition. Jack Layton's career is most instructive. He came from a family of successful piano manufacturers – in 1887 H A Layton was presented with a prize for tuning by Queen Victoria's daughter. But by the time Jack came along the family's private-sector wealth-creation gene had been pretty much tuned out for good: He was a career politician, so is his wife, and his son. They're giving him a state funeral because being chair of the Federation of Canadian Municipalities and the Toronto Renewable Energy Co-operative is apparently more admirable than being chairman of Layton Bros Pianos Ltd.

The piano manufacturer pays for the Federation of Canadian Municipalities, not the other way round. The private sector pays for the Vermont non-profits and the Manchester rioters and the entire malign alliance of the statism class and the dependency class currently crushing the Western world. America, Britain, Canada and Europe are operating on a defective business model: Not enough of us do not enough productive work for not enough of our lives. The numbers are a symptom, but the real problem, in the excuses for Manchester, in the obsequies in Ottawa, in the ambitions of Vermont, is the waste of human capital.