Hang on, Tar Heels, it's going to be wild 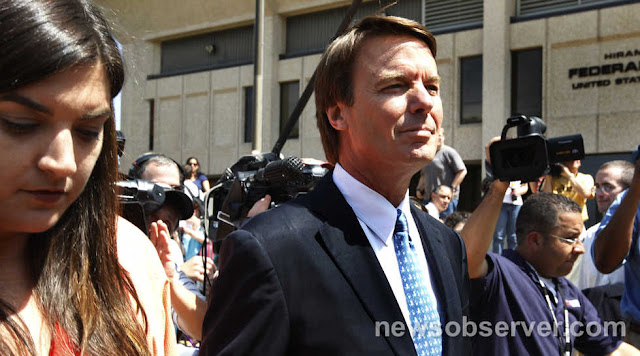 Former U.S. Senator John Edwards and his daughter Cate make their way through the media to a waiting car in front of the Hiram H. Ward Federal Building in Winston-Salem, N.C. where he was arraigned Friday June 3, 2011
(CHUCK LIDDY - cliddy@newsobserver.com)

It was in courtrooms like the federal building in Winston-Salem that a country-boy-on-the-make that everyone called Johnny began carving out his legendary law career.

Who knew back in the 1980s that it would lead to a string of million-dollar verdicts, to the U.S. Senate, to two runs for president, and to the Democratic vice presidential nomination?

Or that in the blink of an eye, it would all come crashing down upon John Edwards, not only dispatching his political career to the dust bin, but leading on Friday to a criminal indictment and his name on an arrest warrant.

So hard has been Edwards' fall that it is hard to find a person who has a kind word to say about him in his home state. Many would just as soon forget Edwards.

But ready or not, North Carolina is about to get a full immersion in the Edwardian scandal - weeks of testimony about an illicit affair, a love child, and hundreds of thousands of dollars of hush money passed in a box of chocolate.

The trial will likely be a media circus unlike the state has ever seen. It will make the criminal proceedings surrounding former House Speaker Jim Black (sentenced to prison) and former Gov. Mike Easley (who accepted a plea bargain) look like traffic court. Think the Rod Blagojevich trial on steroids.

With the Edwards trial this year, and the national Democratic convention next year, political reporters from Japan to Finland will be setting their GPS to Interstate 85 during the next 16 months.

Even though he was the subject of a lengthy grand jury investigation in Raleigh, it seems likely the trial itself will be in Greensboro or Winston-Salem, which is in the U.S. Middle District, where Edwards' Chapel Hill home is and where his campaign headquarters was located.

Edwards faced a difficult decision - whether to accept a plea deal from federal prosecutors on a felony count or to fight the case in court.

To fight the case, Edwards will likely have to spend millions of dollars of his own money, put his family through the bright glare of a highly publicized trial that will splatter the scandal all across the nation's TV screens again. And he risks losing. More than most people, Edwards knows that facing a jury is a game of roulette, and jurors may simply decide to punish a guy who cheated while his wife was battling cancer.

In Edwards' favor, the prosecutors' case is far from a slam dunk. Numerous legal commentators have remarked on how the federal prosecutors seem to be reaching. Campaign law violations usually involve unreported donations to a campaign - not gifts made by supporters to a candidate's girlfriend and former aide.

"A remarkably weak case," was how Citizens for Responsibility and Ethics in Washington, a liberal a watch dog group, described the case.

I have talked to conservatives who are troubled by the indictment as well, comparing the Edwards case to the prosecution of former Bush White House aides Karl Rove and Scooter Libby as an example of overzealous prosecution.

While various groups and individuals expressed reservations about the Edwards prosecution, there were few voices coming to his defense Friday - no statements from North Carolina political figures, or former campaign aides, or former Senate colleagues.

Edwards was always a political loner; he didn't work his way up through politics, but financed his 1998 Senate campaign out of his own pocket. Many Democrats were attracted to his politics, and saw him as a progressive voice for the poor. His most ardent backers even saw him for a while as the second coming of Bobby Kennedy.

But many of those same people became disenchanted with his hubris; and then disillusioned with his recklessness and his treatment of his late wife Elizabeth.

In his autobiographical book, "Four Trials," Edwards talks about how much he relied on Elizabeth as a sounding board for his big cases.

But now that he faces his biggest trial, Edwards seems a man alone.