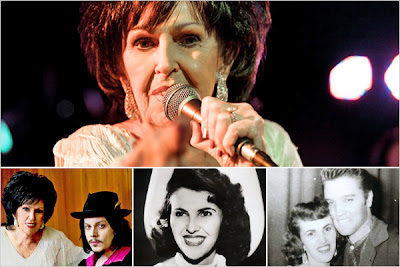 THE crowd was rockabilly through and through: girls in pegged jeans and crimson lipstick, boys in flattops and pompadours, shrunken leather jackets. When Wanda Jackson, 73, took the stage with her guitar for a sold-out show at the Knitting Factory in Brooklyn recently, it was all cat growls, howls and hip swivels — and that was from Ms. Jackson herself. The audience followed suit, with a chorus of fans joining in on her song “I Gotta Know.” She first recorded it in 1956, not long after she met and began dating Elvis Presley.

“Now girls, don’t get ahead of me here,” Ms. Jackson said, telling the story from the stage as the crowd hooted. “It was 1955. My daddy traveled with me and kept my reputation intact.”

Elvis, though, changed her life. In 1958 Ms. Jackson recorded “Let’s Have a Party,” which he originally performed (as “Party” in the 1957 movie “Lovin’ You”). Released as a single two years later, her version became a hit on the pop charts — cementing her place in music history as the first woman to record a rock song. In the years since, she has swung from rock to country to gospel, earning a cult following as the Queen of Rockabilly. Now, like Johnny Cash, Loretta Lynn and Mavis Staples before her, she is the latest veteran artist to work with a devoted younger producer, in the hopes of a third-act career shift.

On Tuesday, Third Man and Nonesuch Records will release “The Party Ain’t Over,” Ms. Jackson’s first studio album in eight years and the first produced by a paragon of contemporary rock: Jack White. The collaboration, with Mr. White playing guitar, is largely retro, a collection of covers recorded live with a 12-piece band. But everyone involved hopes it will introduce Ms. Jackson to a new audience, affording her a level of attention that’s closer to her more famous contemporaries like Buddy Holly, Jerry Lee Lewis, Carl Perkins and Johnny Cash, all of whom she performed with. “She’s influential to every modern female singer, whether they know about her or not,” Mr. White said. “She broke down those walls in the beginning, when it was the hardest to do.”

Since she was discovered at 15 in Oklahoma City, Ms. Jackson’s career has been etched by men: Hank Thompson, the country star who got her signed after hearing her on local radio; Elvis, who encouraged her to wield her singular voice — a graveled purr — in rock instead of country; Wendell Goodman, her husband of 50 years, her tour manager and constant companion; and now Mr. White. But through it all she has become a shimmying emblem of female independence in a male-dominated industry, testing boundaries with her forward style and lyrics about mean men and hard-headed women (and those are the love songs). As she allowed, winkingly, at the Knitting Factory show, “No wonder I have a bad-girl reputation.”

Terry Stewart, the president and chief executive of the Rock and Roll Hall of Fame, said, “She’s still working sort of a wildcat sound, and she had it as a young lady, which was pretty much unheard of at the time.” Vouched for by the likes of Elvis Costello and Bruce Springsteen, Ms. Jackson was inducted in 2009 as an early influencer, and she will be a spokeswoman for the museum’s “Women in Rock” exhibition, opening in May. And she continues to tour, as many as 120 dates a year in the United States and abroad. (Mr. White will join her for a few concerts this year; she plays the Bowery Ballroom in New York on Feb. 24.) “They all point to her as the source of the Nile on this stuff,” Mr. Stewart said of early rock fans.”

For Ms. Jackson the album with Mr. White is the latest surprise in a career full of them. “You can’t hardly name anything that I haven’t experienced somewhere along the way,” she said in a recent interview in a quiet Midtown hotel. Her husband sat nearby, typing on a computer, pausing to offer a cough drop. Ms. Jackson wore gray slacks, a gray cardigan, and a gray sequined top — she favors sparkly — and her blue eyes were sharp. “I always liked fishnets,” she said, complimenting a reporter’s. Her taste can be grandma-sweet too; she called Mr. White “so cute.”

“He’s not one of these sloppy dressers,” she explained. “I said, I’d like to just take you home, Jack, and set you up on the mantel on my fireplace and just get to see you when I walk by.”

She knew his name mostly from a 2004 record he produced for Ms. Lynn, “Van Lear Rose,” which was well received and earned two Grammys. But she was not a fan of the White Stripes. “I told Jack too, I love him, but that type of music, I just don’t relate to it,” Ms. Jackson said. “It kind of goes over my head.”

Initially Ms. Jackson and her husband hoped to make a Sinatra-and-friends-style duet record. “I think those kind of albums should be made illegal, they are such a bad idea,” Mr. White wrote in an e-mail. Instead he preferred to get Ms. Jackson in the studio at his home in Nashville, recording an album of her own.

She was reluctant at first. “I was nervous about it because I didn’t know what he was going to expect,” she said. And she worried that her rockabilly fans would rebel at more contemporary stuff. “Wendell kind of had to drag me into the studio kicking and screaming,” she added. 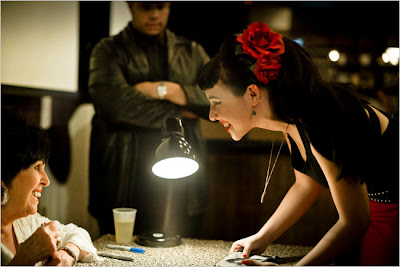 Mr. White, who first heard “Let’s Have a Party” as a teenager in a cover by the 5678s, an all-girl Japanese garage-rock group, put her at ease quickly, helped by the familiar songs he selected: the Andrews Sisters’ “Rum and Coca-Cola,” Bob Dylan’s “Thunder on the Mountain” and the country staple “Dust on the Bible.” Ms. Jackson suggested an Elvis tune, “Like a Baby,” and they both loved “Teach Me Tonight,” recorded by the Cuban-born De Castro Sisters.

One song that Mr. White offered made his singer balk — Amy Winehouse’s “You Know That I’m No Good.” Some of the raunchy lyrics were too much for Ms. Jackson, a born-again Christian since 1971. So Mr. White rewrote them. “He sang in my headphones with me to teach me the melody,” Ms. Jackson said, “and then once I got it I said, ‘Oh yeah, this is a great song.’ ”

But he was a demanding producer. “I’m not really used to that,” she said.

In the studio Ms. Jackson likened his approach to a “velvet brick,” which he said was one of the best compliments he’s ever received. (“It’s got me wondering about coating my tombstone in red velvet flocking,” Mr. White said. “I’m looking into that.”)

They played with the song selection to achieve the right mix of inspiration and believability. “Making an album of rockabilly covers would’ve been too easy and boring,” he said. “The idea was this woman has an attitude in her that can work in calypso, funk and yodeling, just like it can in rockabilly. Wanda and I wanted to get someplace further out there and see what she could pull off at this stage in her career.”

Ms. Jackson had a string of country hits in the 1970s, and in the ’80s and ’90s she was kept afloat by European fans, alongside the nostalgists who make up the rockabilly scene in the United States. Now she is being discovered by a younger generation of vintage-loving artists. “I watch YouTubes of her all the time,” said Zooey Deschanel, the actress and one-half of the indie-pop duo She & Him. “I’m obsessed with her. She can growl and she has amazing rhythm. She does stuff that no one else can do.”

That unique sound is still evident on “The Party Ain’t Over,” which begins with a yowling, sped-up version of “Shakin’ All Over,” by the ’60s English group Johnny Kidd and the Pirates. With the exception of the album’s last track, which showcases Ms. Jackson’s yodeling — a skill her husband told Mr. White about — the arrangements are pulsing, not stripped down, with bits of surf rock and oompah driven by guitar. (Members of Mr. White’s other bands, the Dead Weather and the Raconteurs, sat in, along with his wife, the model and singer Karen Elson, who sometimes also fixed lunch.)

Ms. Jackson’s style is a throwback too. For the album she’s photographed in one of Mr. White’s vintage cars, wearing a pair of her own ’50s sunglasses. She was one of the first Southern artists to reject the fussy cowgirl outfits of her era in favor of pencil skirts, high heels, big jewelry and bouffants. (When she toured Japan after her song “Fujiyama Mama” became a surprise No. 1 hit there in 1958, she learned how to tease her hair by imitating the geishas, she said.) Told she couldn’t wear a strapless gown to the Grand Ole Opry, she adopted a tight, fringed shift dress — sewn by her mother — as her costume. “All I had to do on that dress was tap my foot and everything moved,” Ms. Jackson said, pleased.

She still wears fringe to perform, and plays guitar at home in Oklahoma City. She and Mr. Goodman raised their children there, and now two of her granddaughters have taken up music. The couple is devoted to family — Mr. Goodman gave up his career at I.B.M. to work with his wife — and church. Which doesn’t mean that Ms. Jackson is above gossiping about her ex.

When she and Elvis were performing together and dating, he took her outside to his car during a break between matinee and evening shows. “He asked me to wear his ring and be his girl,” Ms. Jackson said. He gave her a ring off his finger, with tiny stones — “itty-bitty,” she said. “They were diamonds. I had them checked.” She laughed. “I’m bad, I’m no good.”

Did she ever wish she’d had as much fame early in her career as her contemporaries?

She’s jealous, she said, of country artists today, with their magazine covers and cosmetics deals. “I expected to be a big star and I got to be a star, but not that big star I wanted to be,” she said. But, she added, “I have more celebrity status now than I ever had in my life, and I appreciate it more. I’ve paid my dues in the business, but I’ve been rewarded for it. Almost every night someone will come and say, ‘After hearing you and seeing you on YouTube, I’ve always wanted to form a girl band — and I’ve done it.”

After her show at the Knitting Factory she signed autographs until 1:30 a.m. “The fans keep me young,” she said, “the spirit of those songs and the way the kids love it.” Without making much of a fuss about it Ms. Jackson has outlasted nearly all her male contemporaries.

She wears Elvis’s ring sometimes, on a chain around her neck. “Yes, girls, he was a good kisser,” she told the crowd.

“You were too!” a female voice shouted back.