In defense of Santa and the cult of Christmas 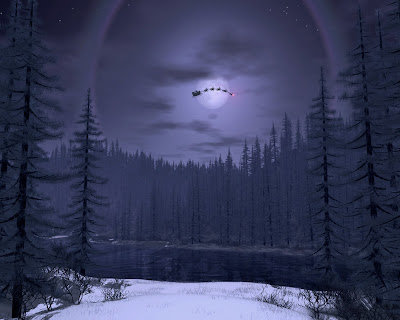 An earnest academic, writing on the Web site Patheos, recently made the case against Santa Claus. Saint Nick is a multicultural nightmare: "A person shouldn't have to pander to a white man - sit on his lap and beg, even! - to enjoy the good life. . . . If Santa were a refugee, or a woman of color, or even a plant or animal, I could probably get on board."[1]

But Saint Nick's offense is also religious. He is "in direct competition with God, and it seems Santa may have the upper hand." "They're both invisible characters that appear from time to time," Jenell Paris continues, "so how does a Christian parent convince a child that God is really real (especially if you once told the child that Santa was also real)?"

This was never much of a problem in my home. My eldest son from an early age was a Santa skeptic - the Christopher Hitchens of his elementary-school set. Having spied out our Christmas preparations, he delighted in dashing the illusions of other children, including our youngest.

Still, I rise to Santa's defense. It is true that the Thomas Nast version of Santa Claus is the same pale shade as Bull Connor.[2] Yet perhaps even mythical figures should be judged, not by the color of their skin but by the content of their character - which, in this case, seems pretty admirable. And, though outwardly resembling Haley Barbour, Santa is unlikely to commit racially charged gaffes in the future.

The second critique is more substantial. Christmas has become a kind of alternative religion, offering watered-down versions of profound theological doctrines. Its miracles are found on 34th Street, not in Bethlehem. The visitation of Gabriel has become the visitation of Clarence, assuring us that it is a wonderful life. The modern cult of Christmas offers a domesticated form of transcendence. Naughty or nice instead of good or evil. A jolly old elf rather than an illegitimate child, destined for an early death.

One's reaction to the modern cult of Christmas depends on one's view of comparative religion. Believers often assert that other religious traditions are simply wrong and inherently dangerous, worthy of attention only to condemn or debunk.

Admittedly, it is not credible to assert that all religions - from Buddhism to Aztec human sacrifice to Quakerism to Wahhabi Islam - are equally true. Religious differences are not trivial. But most faiths share a similar striving. Across the world and across history, human beings have been hounded by an instinct to seek meaning beyond the material - a desire for forgiveness, acceptance, holy awe and ethical behavior. This search takes many forms and faiths, from animism to Zoroastrianism. If the instinct is not merely a cruel evolutionary joke, the practice of religion has produced varied insights and wisdom. As a Christian, I believe that the claims of Christianity are true - but this does not mean other faiths are devoid of all truth.

C.S. Lewis put it this way: "If you are a Christian you do not have to believe that all the other religions are simply wrong all through. If you are an atheist you do have to believe that the main point in all the religions of the whole world is simply one huge mistake. If you are a Christian, you are free to think that all those religions, even the queerest ones, contain at least some hint of the truth. When I was an atheist I had to try to persuade myself that most of the human race have always been wrong about the question that mattered to them most; when I became a Christian I was able to take a more liberal view."

So I choose to take a more liberal view of the Christmas cult. Its tacky materialism can be unattractive. But the desire for Christmas miracles and visiting angels - for Tiny Tim not to die and for hooves on the rooftop and for George Bailey to be the richest man in town; for just one night of calm and hope - are not things to be lightly dismissed.

"If I find in myself," says Lewis, "a desire which no experience in this world can satisfy, the most probable explanation is that I was made for another world." In this argument, the sentimental desires of Christmas are hints and rumors and reminders of a birth that somehow represents their culmination. Put another way: The hopes and fears of all the years are met in Thee tonight.

[2] http://www.sonofthesouth.net/Thomas_Nast/Thomas_Nast_Santa.jpg
Posted by jtf at 12:34 PM