Wilders’ Trial: Win One, Lose One 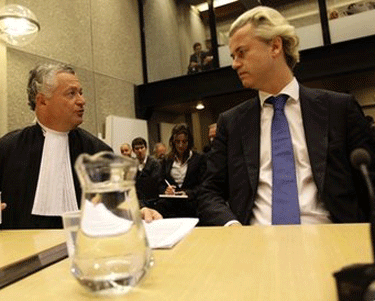 On Tuesday, as his trial resumed in Amsterdam on various charges of offending Muslims, Dutch freedom fighter Geert Wilders (pictured at right)won one victory and suffered one defeat. This is welcome news for Wilders personally, since any acquittal moves him closer to the end of these nightmarish proceedings; however, the ominous implications of his trial in general for the freedom of speech were reinforced on the same day, and those implications could have deleterious effects far beyond the Wilders trial itself.

First, the good news: public prosecutors Birgit van Roessel and Paul Velleman noted that the statements for which he is on trial referred to Islam and the Qur’an, not to Muslims as people – although they did add in the politically correct observation that Wilders’ statements might nevertheless hurt Muslims’ feelings. Despite that assertion, in a burst of logical thinking unusual in these proceedings, they recommended that since Wilders was speaking about Islamic texts and teachings and not Muslim people, the charge against him of group defamation should be dropped.

That was good as far as it went, although Wilders still faces charges of incitement that are as dangerous as they are vague. The danger of such charges was thrown into vivid relief Tuesday by a chilling statement that the prosecutors made: that Wilders will not be allowed to defend himself from charges of inciting hatred by arguing that what he said was true. Said van Roessel: “You can expect a politician to be aware of the impact of his words and in any case, the legal limit may not be crossed, no matter how important it may be to address supposed problems and to contribute to matters of general interest.”

So if the truth is not deemed to “address supposed problems and contribute to matters of general interest,” then it may not be spoken. The truth is now inadmissible in Dutch courtrooms – a chilling reality with likely reverberations far beyond the trial of Wilders himself.

By declaring the truth inadmissible in court, the prosecutors have stepped over the boundary of the rule of law into an arrogance of power that historically has led to authoritarianism and totalitarianism, powered by and only capable of being stopped by brute force. For van Roessel did not say, and indeed could not say, who would be given the right or authority to determine whether or a particular truth addressed supposed problems and contributed to matters of general interest, and could thus lawfully be encunciated. If the truth is no longer the criterion of judgment in Dutch courts, then the only thing that can fill the vacuum it will leave is the raw will to power. Judges no longer have to sift evidence and come to a conclusion based thereon; they only need to make sure they are satisfying those with the most money or the biggest guns.

In today’s Europe, Islamic supremacists will be only too happy to fill this vacuum, and certainly no difficulty coming up with whatever is required in terms of money and ordnance to bring their will to power to fruition. Authoritarian states abound in the Islamic world, and a rootless and aimless Europe, having utterly severed its own cultural moorings, will be fertile soil before too long to plant new ones.

Dutch authorities have opened the door to the extinguishing not only of the freedom of speech, but of all the other freedoms, arising from the nature and dignity of the human person, that are the hard-won legacy of Western Judeo-Christian civilization. Equality of rights of all people before the law? Citizens of the new Europe will indeed be equal with one another, but only in the sense that all will be equal in having no rights before the almighty state, which alone defines what is acceptable to be thought and said and what isn’t.

Europe faces this multifarious hell whether or not Wilders is acquitted of the remaining charges against him: a crucial Rubicon has already been crossed with the trial itself, and if the prosecutors’ statement that the truth is no defense is not countermanded and rebuked forthwith by the highest possible relevant authorities, then the darkness will descend upon Europe even more quickly than it did during the halcyon days of the Third Reich.

Even with his partial acquittal Tuesday, Wilders’ nightmare – and Europe’s – could be just beginning.

Click on link below to view Geert Wilders' film Fitna: