A ‘Family’ Celebration at the Emmys

After only one season, “Modern Family” had just come of age, capturing the Emmy for best comedy series and unseating NBC’s “30 Rock,” the winner for the past three years.

Behind the scenes, E! channel was handing out cupcakes, which Ms. Winter skipped, smartly, as Mr. Gould was soon whining, “Chocolate’s dripping everywhere!” He was doing what many 11-year-old boys do best: shouting.

The scene could have been pulled from the show itself. In “Modern Family,” ABC and the 20th Century Fox studio have successfully built a broad, relatable family comedy appreciated by critics and viewers alike.

“Everyone can see a little something about their family somewhere in the show,” said Jason Winer, one of its directors. 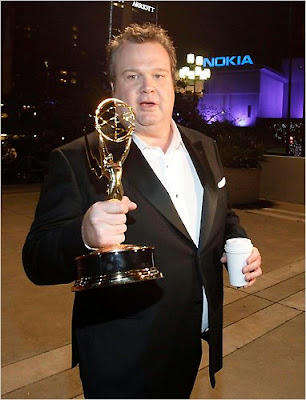 Eric Stonestreet won an Emmy for outstanding supporting actor in a comedy for “Modern Family.” The series was named best comedy.

“Modern Family,” at least this year, occupies a sweet spot in television. With an average of 11.1 million viewers in its first season, it draws fewer people than the CBS sitcoms that are generally snubbed by Emmy voters but more than the NBC sitcoms that television critics tend to favor.

Clutching his two Emmys backstage (for best comedy and for writing), Steven Levitan, one of the show’s executive producers, said he would leave those labels up to reporters but added, “Believe me, I’m happy to be in that spot.”

So too is ABC, which hasn’t had a best-comedy winner since “The Wonder Years” in 1988. The network is trying to build an all-comedy night on Wednesday, with “Modern Family” as the backbone.

Although it hasn’t entirely won over Middle America, “Modern Family” is the kind of show that families can watch together, which partly explains its success. This mockumentary-style series follows three connected families: a nuclear family; a stepfamily with Ed O’Neill and, playing his much younger wife, Sofia Vergara; and a gay couple with a newly adopted Vietnamese baby. The families have an overtly upper-middle-class lifestyle, making the show either aspirational or envy-provoking, depending on the mood of the viewer.

Before the show had its premiere last September, Mr. Levitan, who has three children, said, “I just wanted it to be real.”

After the Emmy victory, after the interviews were all over, the cast looked remarkably like a real family, with each person reverting to his or her on-camera role. Ms. Winter, 12, was sending her friends text messages. Sarah Hyland, 19, who plays the older sister of Ms. Winter’s and Mr. Gould’s characters, was figuring out which after-party to go to first. And what was Julie Bowen, who plays the mother of the three, doing? Naturally, she was keeping tabs on Ms. Hyland’s party plans.

Meanwhile, Rico Rodriguez, 12, who plays the old soul Manny (son of Ms. Vergara’s character; stepson of Mr. O’Neill’s), was on the phone with his father, who was wishing him a good night. He had school on Monday morning.

The one family member missing from this scene was Eric Stonestreet, who won an Emmy for best supporting actor. He was the sole “Modern Family” actor with a victory Sunday night, although four other cast members — Mr. Stonestreet’s on-screen partner, Jesse Tyler Ferguson; Ms. Bowen; her on-screen husband, Ty Burrell; and Ms. Vergara — were also nominated in supporting roles.

Notably, Mr. O’Neill, the most recognizable cast member, was submitted as a supporting actor, not a lead, and was snubbed for a nomination, something that Mr. Winer chalked up to the idea that “people think of Ed as a lead actor.” 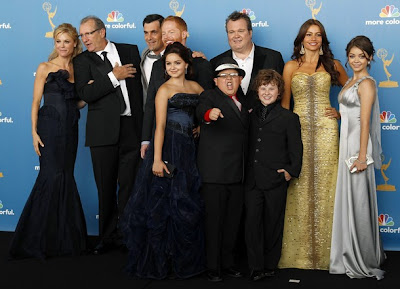 The show was introduced at a time when the TV chattering classes predicted that comedies were on the rise, a byproduct of the recession. ABC had so much faith in it that the network screened the entire first episode to advertisers at its new-season presentation in May. “Modern Family” was championed by ABC’s president of entertainment, Stephen McPherson, who hastily exited last month. Mr. Levitan thanked him while accepting the writing award.

Asked what viewers can expect in Season 2, Mr. Levitan said, “More of the same.” Someone is stuck in a bathroom during an earthquake. Ms. Winter’s character gets a boyfriend, kind of. Mr. Stonestreet’s and Mr. Ferguson’s characters, Cameron and Mitchell, kiss.

That kiss has been the subject of much speculation and some criticism, since there was no such kiss in Season 1. The producers say it has been planned for a while.

Backstage, Mr. Stonestreet was asked if he thought the show had influenced the same-sex-marriage debate in California. Without wading into that specifically, he said, “We get amazing compliments from kids of same-sex-marriage families” and recounted a recent conversation with a man who thanked him for giving his sister “ammunition for the bullies.”

Echoing Mr. Stonestreet in an interview, Mr. Levitan said, “We’re here to make people laugh,” but added, “I think that if people fall in love with Cam and Mitchell, then maybe they’ll be a bit more understanding when they’re thinking about those issues at the ballots or in general in life.”

Eventually on Sunday night, the cast and producers caught up with their real families. Mr. O’Neill walked quietly through a parking garage to the Governors Ball, holding his wife’s hand. Mr. Rodriguez was teased by his older sister, Raini, an actress, after accidentally referring to “Modern Family” as “Emmy-nominated.”