"When I Paint My Masterpiece" is a great summer vacation song—particularly if you’re heading to Europe, as right about now, a lot of Americans are.

In the Bob Dylan lexicon, I think it’s fair to say that “When I Paint My Masterpiece,” a song originally performed by The Band and which first appeared in Dylan’s own voice on 1971’s Greatest Hits, Vol. 2, is not generally regarded as his “masterpiece.” It may not even be regarded as a masterpiece, which is as it should be given its title, although I beg to differ. It is a masterpiece in the genre of what you could call the “travel song,” or perhaps the “time-travel song,” depending on how you view it. However you look at it, it is a great summer vacation song — particularly if you’re heading to Europe, as right about now, a lot of Americans are. 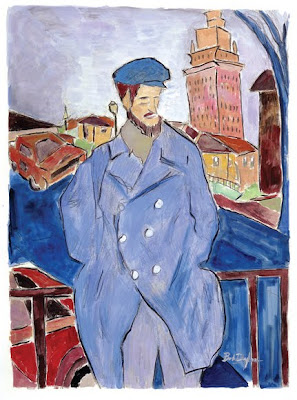 Clocking in at 3 minutes and 22 seconds, “When I Paint My Masterpiece” comes crammed with a traveler’s itinerary. There are names of much-visited cities (Rome, Brussels, Venice), popular tourist sites (the Spanish Steps, the Coliseum), transportation (planes, trains, gondolas), travelers’ bugaboos (crowds, bumpy flights, muscle-strains), as well as the usual standbys (hotel rooms, cameras, sex). And all in three verses plus a two-line bridge! Dylan even sounds as if he has a cold (more than he usually does, that is), another problem that tends to afflict travelers.

The opening quatrain is irresistible. Bluesy piano, slide guitar, drums, and a voice that seems to hover over centuries:

Oh, the streets of Rome are filled with rubble,
Ancient footprints are everywhere.
You can almost think that you’re seein’ double
On a cold, dark night on the Spanish Stair.

I half-sung, half-murmured those words to myself repeatedly during a recent visit to … Amsterdam, a city not mentioned in the lyrics. There was no rubble, no ancient footprints, but there were those dirty old canals, and endless hooped bridges, to walk beside at night. It was enough: I was on the move, in the Old World, and the song resonated.

But what kind of song is it, and when is it taking place? The opening four lines just about suggest the present, but then Dylan shifts dramatically either into the past or into a very pleasing fantasy:

Got to hurry on back to my hotel room,
Where I’ve got me a date with Botticelli’s niece.
She promised that she’d be right there with me
When I paint my masterpiece.

So are we in the late 15th century or in the smeared and blurry imagination of a 30-year-old rock star as, jet-lagged and no doubt inebriated (“seein’ double”), he walks the nocturnal streets of Rome filled with inchoate yearning? Either way, they’re terrific lines to sing — and who could resist a date with Botticelli’s niece? — if you’re planning to wander and ponder any of Europe’s old capitals yourself this summer.

The second verse begins with some of the greatest, and funniest, lines Dylan has ever written. Todd Haynes tried to juggle Dylan’s multiple personae in his 2007 bio-pic, I’m Not There, but the results seem pedestrian when placed next to the singer’s own work. We’re still in Rome, but it’s Ancient Rome, or more likely the dream of a past life in Ancient Rome:

Oh the hours that I spent inside the Coliseum,
Dodging lions, and wastin’ time.
Oh, those mighty kings of the jungle, I could hardly stand to see ‘em,
Yes it sure has been a long, hard climb.

You can say that again! Bob Dylan, former slave and ex-gladiator, who was so adept at his enforced profession of dodging the mighty kings of the jungle that he frankly found the entire enterprise a bore, jeering spectators and thumbs-down emperors in togas be damned. A jaded gladiator. How cool is that? And who else could pull it off?

“When I Paint my Masterpiece” wouldn’t be a Dylan song if it didn’t have its lyrical rough spots, and the last four lines of this second verse aren’t quite as good as the rest. The temporal confusion gets even more complicated, as we now appear to enter the memory (he even uses the word) of Dylan himself, and of his childhood in Minnesota:

Train wheels running through the back of my memory,
When I ran on the hilltop following a pack of wild geese.
Someday, everything is going to be smooth like a rhapsody,
When I paint my masterpiece.

This is Dylan the American, finally presenting his passport in a song that has so far seen him dating a Renaissance painter’s niece (did Botticelli know?) and playing at being a gladiator. As if to underline the fact, in the two-line bridge between the second and final verse, he takes a brief time-out to switch locations and cast himself as a tired, ordinary American tourist in the world’s most touristic city. Once again, he’s bored, even more so than when he was dodging lions. He’s the tourist who’s had enough of touring and wants to go home:

Floating around Venice in a dirty gondola,
Oh to be back in the land of Coca-Cola!

In the song, Dylan stretches out those last two syllables as far as he can, and then comes the clincher, the line that, although unremarkable in itself, starts off the final verse and flatly underscores that this really is a song about movement and travel:

I left Rome, and landed in Brussels.

As I walked around Paris (where I saw the Botticelli’s at the Louvre), and then Amsterdam (I was thinking of going to Brussels, but didn’t), this was the line that most regularly popped into my head. I sung it to myself so often it almost became a joke. In a slyly absurdist way, the line is a joke. Just because you leave Rome, why should you “land” in Brussels, as if dropped there from outer space? Why not Madrid, or Lisbon, or Helsinki? On its face a bare statement of fact, it is a witty comment on the random nature of tourism. Why do we choose one place instead of another? What do we hope to discover in Brussels that we couldn’t find in Rome?

There is also a deliberate, matter-of-fact side to Dylan’s delivery of the line that informs us that we are now, finally, coming close to the song’s true present tense, witnesses to the travails of the touring superstar amid the absurdities of the modern world circa 1966 (when Dylan had last been on tour, five years earlier): the media, the crowds, the frenzy, and, running beneath it all, the wistful desire to write the perfect song, to sum it all up and make it all worthwhile.

I left Rome, and landed in Brussels,
On a plane ride so bumpy that I almost cried.
Clergymen in uniform and young girls pullin’ muscles,
Everyone was there to greet me when I stepped inside.
Newspaper men eating candy
Had to be held down by big police.
Someday, everything is going to be different
When I paint my masterpiece.

Seen in the light of this final verse, everything that has preceded it has been a shuffling of imaginary selves and eras, the hallucinatory “travels” of a man who’s too busy rushing from airports to hotel rooms to concert halls to actually do any traveling except in the most hurried, superficial sense.

It’s a feeling with which even we, the unfamous ones, who will not be greeted by fat cops and pre-diabetic media when our planes touch down, are familiar. Tourism is both too fast and too slow. Days lag, then speed up, then disappear. After 72 hours we start to feel as if we “know” a city, or at least a neighborhood; two days later we realize this was an illusion. Then we take off, restlessly moving on to the next stop on our iron itinerary, the plane or train tickets paid for, the hotel rooms booked, our fates packaged and sealed. What’s left is memory and imagination, along with the fleeting, bittersweet recognition (the one that permeates so much of Dylan’s song) that although we might have lived a different life in a different country, perhaps even in a different era, we will soon trade the gondola for the (Diet) Cola and return home on schedule — or else be fined by the airlines.

- Brendan Bernhard is a Contributing Editor to the New York Sun, where he was the television critic from 2006-08, and a former staff writer at LA Weekly. He writes about culture, politics, and sports, and is the author of White Muslim (Melville House), a study of converts to Islam in the West.
Posted by jtf at 6:52 AM