By Bobby Jindal
The Washington Post
Saturday, July 17, 2010; A13
http://www.washingtonpost.com 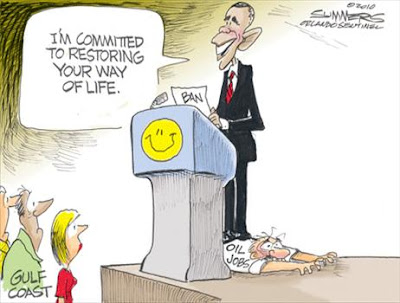 By now, everyone no doubt realizes that I am not a fan of the pace at which the federal government has worked to contain the oil spill in the Gulf of Mexico. Sadly, federal officials were slow to act and overly bureaucratic. They have never really understood the urgency of the situation down here. I'm not raising a question of motive; it's simply a function of the federal government being a slow-moving albatross. The only way to attack a crisis like this is with the urgency of a military mind-set.

Even after the well is finally capped, the damage done to our environment, to the Gulf of Mexico, and to our marshes, wetlands and beaches will take years to repair. There is another type of damage from this spill: its human impact. Thousands of lives, businesses and families are reeling.

Against this backdrop, the federal government unwisely chose to add insult to injury by decreeing a moratorium on deepwater drilling in the gulf.[1] This ill-advised and ill-considered moratorium, which a federal judge called "arbitrary" and "capricious," creates a second disaster for our economy, throwing thousands of hardworking folks out of their jobs and causing real damage to many families. Now this federal policy risks killing 20,000 more jobs and will result in a loss of $65 million to $135 million in wages each month.

To ensure that such a disaster does not happen again, should the federal government increase oversight, or require additional and better equipment or on-site federal inspectors, or even temporarily pause drilling at specific rigs for additional reviews? Of course. Could it? Of course. But by simply stopping all deepwater drilling, federal officials appear more interested in ideology and scoring political points -- as they have done with the misguided cap-and-trade legislation -- at the expense of Americans who derive their livelihood from the energy industry.

Let's be clear: This moratorium will do nothing to clean up the Gulf of Mexico, and it is already doing great harm to many hardworking citizens. The effects will extend well beyond Louisiana. Since the moratorium was announced, America has already lost two rigs to foreign countries. More drilling companies are negotiating right now to work elsewhere. Every time we decrease our level of production, we make America more dependent on foreign sources of energy.

On those few occasions when our country suffers a commercial airline tragedy, we do not respond by stopping all air travel for six months. Rather, we get to work figuring out the root cause and set about trying to make air travel safer. We don't grind everything to a halt and put tens of thousands of people out of work, jeopardizing our economy.

So, my state joined a lawsuit against the moratorium. We pointed out that a majority of the experts the federal government consulted before the ban, including representatives from the National Academy of Engineering, have stated publicly that they do not agree with the six-month blanket moratorium.[2]

The court sided with the people of Louisiana in this matter. Consider the judge's statements: that the federal moratorium would result in the loss of jobs and livelihoods, that the government's action "does not seem to be fact-specific" and that the "government's hair-splitting explanation abuses reason and common sense."

One might assume that the federal government would back down, lift the moratorium and get on with the business of ensuring that nothing like this ever happens again in federal waters.

Our federal government chose to fight on in court, and lost a second time.

Surely now, many of us thought, the federal government would stop its efforts to halt all drilling and instead get serious about more rigorous oversight and inspections.

Louisianans, of all people, don't want to see another drop of oil spilled into the Gulf of Mexico. It is our land and our way of life that are being harmed. Yet the administration tells our people to simply file a claim with BP or file for unemployment. Our people want to work, not collect unemployment checks.

The writer, a Republican, is governor of Louisiana.

Email ThisBlogThis!Share to TwitterShare to FacebookShare to Pinterest
Labels: Energy