Back in early December, Roger L. Simon and Lionel Chetwynd called on the Motion Picture Academy to rescind their Oscar to Al Gore’s movie, which is more and more looking like it was produced by Industrial PowerPoint and Magical Thinking: 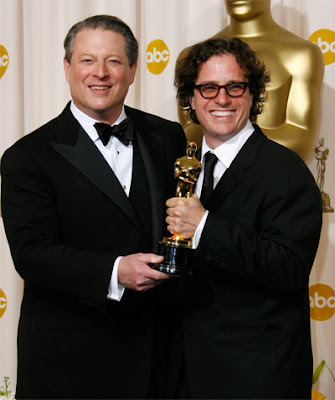 At Big Journalism, Michael Walsh adds, “Al Gore, Call Your Agent: It Really May Be Time to Give Back That Oscar:”

Oops! The wheels may have just come off Al Gore’s Oscar-winning, eco-friendly tricycle/global-warming scam. From the U.K. Times on Line today (Sunday):

World may not be warming, say scientists

The United Nations climate panel faces a new challenge with scientists casting doubt on its claim that global temperatures are rising inexorably because of human pollution.

“The temperature records cannot be relied on as indicators of global change,” said John Christy, professor of atmospheric science at the University of Alabama in Huntsville, a former lead author on the IPCC.

The doubts of Christy and a number of other researchers focus on the thousands of weather stations around the world, which have been used to collect temperature data over the past 150 years.

These stations, they believe, have been seriously compromised by factors such as urbanisation, changes in land use and, in many cases, being moved from site to site.

“The story is the same for each one,” he said. “The popular data sets show a lot of warming but the apparent temperature rise was actually caused by local factors affecting the weather stations, such as land development.”

And even Phil Jones, East Anglia’s Mr. “Hide the Decline” himself, is rapidly backtracking, as Noel Sheppard writes at Newsbusters:

In a lengthy Q&A published at BBC.com Saturday, Jones also said: the recent warming trend that began in 1975 is not at all different than two other planetary warming phases since 1850; there has been no statistically significant warming since 1995, and; it is possible the Medieval Warm Period was indeed a global phenomenon thereby making the temperatures seen in the latter part of the 20th century by no means unprecedented.

Perhaps the most significant quote from Jones is this:

N – When scientists say “the debate on climate change is over”, what exactly do they mean — and what don’t they mean?

It would be supposition on my behalf to know whether all scientists who say the debate is over are saying that for the same reason. I don’t believe the vast majority of climate scientists think this. This is not my view. There is still much that needs to be undertaken to reduce uncertainties, not just for the future, but for the instrumental (and especially the palaeoclimatic) past as well.

Definitely keep that paragraph handy the next time a politician attempts the inevitable “the time for talking is over / this is settled science” dodge to shut down debate.

Which brings us back to Al Gore. He’s on record as being the number one fan of the Marxist Frankfurt School; at some point I wonder if he’ll quietly switch the defense of his movie from “this is settled science” to some variation on the postmodern “this my truth” trope, to help sell his Sorelian Myth, as Lee Harris defined the term in 2006:

[Georges Sorel 1847-1922], for whom religion was important, drew a comparison between the Christian and the socialist revolutionary. The Christian’s life is transformed because he accepts the myth that Christ will one day return and usher in the end of time; the revolutionary socialist’s life is transformed because he accepts the myth that one day socialism will triumph, and justice for all will prevail. What mattered for Sorel, in both cases, is not the scientific truth or falsity of the myth believed in, but what believing in the myth does to the lives of those who have accepted it, and who refuse to be daunted by the repeated failure of their apocalyptic expectations. How many times have Christians in the last two thousand years been convinced that the Second Coming was at hand, only to be bitterly disappointed — yet none of these disappointments was ever enough to keep them from holding on to their great myth. So, too, Sorel argued, the myth of socialism will continue to have power, despite the various failures of socialist experiments, so long as there are revolutionaries who are unwilling to relinquish their great myth. That is why he rejected scientific socialism — if it was merely science, it lacked the power of a religion to change individual’s lives. Thus for Sorel there was “an…analogy between religion and the revolutionary Socialism which aims at the apprenticeship, preparation, and even the reconstruction of the individual — a gigantic task.”

Which sounds like it defines Al’s film remarkably well.

Filed under: God And Man At Dupont University, Hollywood, Interrupted, Liberal Fascism, The Assault On Reason, The Future and its Enemies, The Return of the Primitive
Posted by jtf at 12:06 PM