They tossed perfection away like a Christmas leftover. They treated it with a casual shrug of the shoulders, disdain even, as if they were beyond such a trivial pursuit. Standing on the precipice of NFL history, the Indianapolis Colts' brain trust arrogantly, foolishly, treated Sunday's second half like a preseason game. 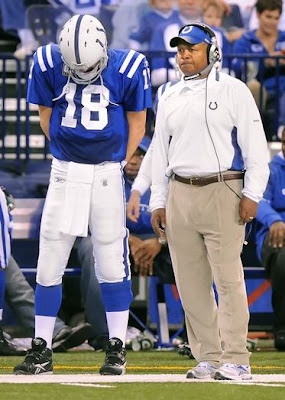 The Colts rested many starters, particularly quarterback Peyton Manning, for most of the second half in Sunday's 29-15 loss to the New York Jets at Lucas Oil Stadium -- the Colts' first loss of the season after a 14-0 start.

What happens now? Does this guarantee the Colts will reach the Super Bowl? Is that how it works?

At least the New England Patriots (2007) and the New Orleans Saints ('09) tried to do something special and noble, tried to do something that had been done just once in NFL history. At least they tried to put a scare into the 1972 Miami Dolphins, who really should be sending a case of champagne up to Colts President Bill Polian and coach Jim Caldwell first thing this morning.

The Colts, though, couldn't have been bothered. They treated the second half as if it were gum on the bottom of a shoe. They sent in backup quarterback Curtis Painter to hold on to a 15-10 lead, and it was like having Mel's Detailing put the finishing touches on the Sistine Chapel.

It felt wrong. It was wrong. Cheap, really.

The players? They wanted this. At least a fair shot at it.

"Who wouldn't?" Reggie Wayne said. "I mean . . . who wouldn't? Doesn't everybody want to be a part of history? Not a season goes by that you don't hear about the '72 Dolphins."

"I guess there's a bigger picture," Wayne said. "We all wanted to play, but the big dog (Caldwell) made a decision and we have to roll with that decision. We came out after halftime and felt like we were starting to roll and could score some points, but the manager took us off the mound."

On a day when the locker room cleared out more quickly than usual, virtually every Colt was parroting the company line, Manning included. And that's no surprise. This team doesn't do controversy, at least not in public. During most of the second half, Manning just stood silently and helplessly, watching as the perfect season circled the drain.

"We are followers of our head coach and the people in the organization to lead us and give us direction," Manning said. "That's the way we've always done around here. Our job is to take instructions from our superiors and follow those instructions."

At least in 2005, the San Diego Chargers came to the RCA Dome and took the perfect season away from the Colts' front-liners. This time, the Colts flat-out gave it away.

Perhaps they are above all of that. Maybe Polian and Caldwell are smarter than everybody else. Or maybe they're just too smart for their own good.

"The perfect season has never been one of our goals," Caldwell said after becoming the first 14-1 head coach ever booed by his team's fans. "It's never been anything we focused on or anything we talked about. Obviously, we were placed in this situation, but you still have to look at your objective and keep an eye on what's most important."

There was no grousing about the decisions to sit several players, all of whom were dealing with injuries of some sort. That's the luxury you enjoy when you clinch the top seed in 13 games.

Ultimately, this was about one player -- Manning. The moment poor Painter came into the game in the third quarter, you could sense the deflation, in the offense, in the defense and in the crowd. The Colts had waved the figurative white flag, and everybody knew it.

"Jim was going to make that call whenever he felt it was appropriate," Polian said. Asked about the fans' angry response -- and remember now, they're still 14-1 -- he said, "I understand that. . . . I can."

In the end, this doesn't make the Colts any more or less well-equipped to handle the coming postseason. The truth is, they could win the whole thing (in which case Polian and Caldwell will accept the mantle of genius) or they could lose their first playoff game (in which case, we will mention this game a couple thousand times). This wasn't about that, and really, nothing changes in terms of the team's Super Bowl aspirations.

What mattered -- or at least mattered to some of us, including the players -- was the chance to become one of football's forever teams. The Jets? At home? With that offense? And then a game at Buffalo next week? It was right there. Right there.

The Colts casually gave away this thing, spitting on football history along the way. Maybe an organization that has lost its first-round playoff game four times in seven years knows a better way, but we've seen what happens when this team stops trying to do its best to win. Saw it in 2005. Saw it in '07.

"Nobody said anything (to Caldwell)," Wayne said. "What could we say? This was his decision. We've got to live with it."

The Colts are no less a Super Bowl contender today than they were two days ago. But they had a chance, a rare opportunity to chase the ghosts of '72. And they acted like none of it mattered.

Someday, they will look back at this game, this moment in history, and decry the fact that they weren't allowed to chase the ultimate greatness.
Posted by jtf at 9:15 AM

The looks on the faces of the Colts players said it all. The ultimate goal each year is to win the Super Bowl, but they also had the opportunity to set themselves apart and go 19-0, a feat that has never been accomplished before. I think the players were disheartened regardless of what they said in interviews.