By George F. Will
The Washington Post
http://www.washingtonpost.com/
Sunday, November 29, 2009

DENVER- Inside the green neon sign, which is shaped like a marijuana leaf, is a red cross. The cross serves the fiction that most transactions in the store -- which is what it really is -- involve medicine. 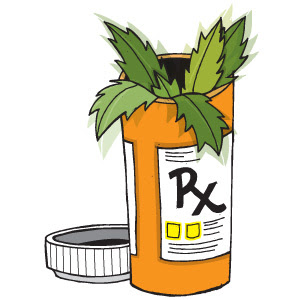 The Justice Department recently announced that federal laws against marijuana would not be enforced for possession of marijuana that conforms to states' laws. In 2000, Colorado legalized medical marijuana. Since Justice's decision, the average age of the 400 persons a day seeking "prescriptions" at Colorado's multiplying medical marijuana dispensaries has fallen precipitously. Many new customers are college students.

Customers -- this, not patients, is what most really are -- tell doctors at the dispensaries that they suffer from insomnia, anxiety, headaches, premenstrual syndrome, "chronic pain," whatever, and pay nominal fees for "prescriptions." Most really just want to smoke pot.

So says Colorado's attorney general, John Suthers, an honest and thoughtful man trying to save his state from institutionalizing such hypocrisy. His dilemma is becoming commonplace: Thirteen states have, and 15 more are considering, laws permitting medical use of marijuana.
Realizing they could not pass legalization of marijuana, some people who favor that campaigned to amend Colorado's Constitution to legalize sales for medicinal purposes. Marijuana has medical uses -- e.g., to control nausea caused by chemotherapy -- but the helpful ingredients can be conveyed with other medicines. Medical marijuana was legalized but, Suthers says, no serious regime was then developed to regulate who could buy -- or grow -- it. (Caregivers? For how many patients? And in what quantities, and for what "medical uses"?)

Today, Colorado communities can use zoning to restrict dispensaries or can ban them because, even if federal policy regarding medical marijuana is passivity, selling marijuana remains against federal law. But Colorado's probable future has unfolded in California, which in 1996 legalized sales of marijuana to persons with doctors' "prescriptions."

Fifty-six percent of Californians support legalization, and Roger Parloff reports ["How Marijuana Became Legal" in a September issue of Fortune] that they essentially have this. He notes that many California "patients" arrive at dispensaries "on bicycles, roller skates or skateboards." A Los Angeles city councilman estimates that there are about 600 dispensaries in the city. If so, they outnumber the Starbucks stores there.

The councilman wants to close dispensaries whose intent is profit rather than "compassionate" distribution of medicine. Good luck with that: Privacy considerations will shield doctors from investigations of their lucrative 15-minute transactions with "patients."

Colorado's medical marijuana dispensaries have hired lobbyists to seek taxation and regulation, for the same reason Nevada's brothel industry wants to be taxed and regulated by the state: The Nevada Brothel Association regards taxation as legitimation and insurance against prohibition as the booming state's frontier mentality recedes.

State governments, misunderstanding markets and ravenous for revenue, exaggerate the potential windfall from taxing legalized marijuana. California thinks it might reap $1.4 billion. But Rosalie Pacula, a Rand Corp. economist, estimates that prohibition raises marijuana production costs at least 400 percent, so legalization would cause prices to fall much more than the 50 percent assumed by the $1.4 billion estimate.

Furthermore, marijuana is a normal good in that demand for it varies with price. Legalization, by drastically lowering price, will increase marijuana's public health costs, including mental and respiratory problems, and motor vehicle accidents.

States attempting to use high taxes to keep marijuana prices artificially high would leave a large market for much cheaper illegal -- unregulated and untaxed -- marijuana. So revenue (and law enforcement savings) would depend on the price falling close to the cost of production. In the 1990s, a mere $2 per pack difference between U.S. and Canadian cigarette prices created such a smuggling problem that Canada repealed a cigarette tax increase.

Suthers has multiple drug-related worries. Colorado ranks sixth in the nation in identity theft, two-thirds of which is driven by the state's $1.4 billion annual methamphetamine addiction. He is loath to see complete legalization of marijuana at a moment when new methods of cultivation are producing plants in which the active ingredient, THC, is "seven, eight times as concentrated" as it used to be. Furthermore, he was pleasantly surprised when a survey of nonusing young people revealed that health concerns did not explain nonuse. The main explanation was the law: "We underestimate the number of people who care that something is illegal."
But they will care less as law itself loses its dignity. By mocking the idea of lawful behavior, legalization of medical marijuana may be more socially destructive than full legalization.

georgewill@washpost.com
Posted by jtf at 10:25 AM

Email ThisBlogThis!Share to TwitterShare to FacebookShare to Pinterest
Labels: Crime and Punishment, George Will, Health

It feels good to find such an interesting topic on the internet like this one nowadays. I was greatly interested with what you have shared and posted with us. Thanks for this anyway. spice gold