Gore and Google: Pants on Fire

Earth's self-anointed global warming czar, Al Gore, has teamed up with his business partners at Google (he's an Advisory Board member) to make the latest pitch for a planet that is about to burst into a bag of Flamin' Hot Cheetos. Together they have created an internet video which heralds Google's entrance into the world of climate forecasting. 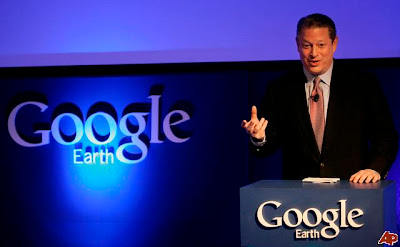 The video champions Google's new mapping tool which simulates a 3D map of the world predicting the effects of climate change through the year 2100. They claim their data is provided by the Intergovernmental Panel on Climate Change. According to Google, the mapping tool was introduced in partnership with the Danish Government ahead of the United Nations Climate Change Convention in December. In otherwords, this is a visual ruse to scare the hell of out of the uninformed masses.

In the video, Gore, who provides the sleepy monotone voice-over, whines out a whopper: "If we were to not dramatically reduce our emissions, the global average temperature is expected to rise as much as four or more degrees Celsius by the end of this century." He continues, declaring, "In addition, the extensive melting of the Greenland and West Antarctica ice sheets...could cause global sea-level to rise between four and twelve meters, with each meter causing roughly another 100-million refugees."

Pants afire! There is absolutely no science to back up these wild claims.

A compilation of all temperature records (satellite and land based) indicates a warming since the mid-19th century (in other words since the dawn of the Industrial Revolution) of .7 degrees Celsius. Point seven degrees. Most of that rise occurred before 1940.

Even the activist scientist from NASA, James "Gandhi" Hansen, well known for his contemptuous climate claims, has not made a prediction like Gore and Google. In 2007, Hansen gave the German magazine Spiegel a fudge-filled million year forecast which looks weak by comparison:

The average temperature is now 0.8 degrees Celsius higher than in the last century with three-quarters of the increase happening in the last 30 years. But...there's another half-degree Celsius in the pipeline due to gases already in the atmosphere, and there's at least one more half- degree to come due to power plants which we're not going to stop immediately. Even if we decide now, we've got to slow down as fast as is practical, there's still going to be enough emissions to take us to the warmest level that the planet has seen in a million years.

So Hansen, well known for his own fire pants, only predicts a rise of one-degree, while Gore-Google are shooting for up to eight. They must be buying their science from a scam artist on Craigslist.

Meantime, the Gore-Google sea level rise prediction is far greater than the idiotic one made in Al's Oscar winning An Inconvenient Truth.

One of the more troubling scenes in Gore's flick involves graphical representations of the world's major cities being submerged due to a rise in sea level from the melting of Antarctica and Greenland.

Gore focuses first on Western Antarctica. He calmly claims, "If this were to go, sea levels worldwide would go up 20 feet."

The real truth is ever since the end of the last Ice Age, global sea level has been gradually increasing. The melting ice and snow from that bitterly cold event is continually trickling into our great oceans and seas. According to the often quoted IPCC's Fourth Assessment produced in 2007, over the past 20,000 years sea level has increased nearly 400 feet. While that may sound like a lot, let's break it down further. Over the past century the average sea level raised a mere 1.8 millimeters per year.

Gore and Google have conveniently cherry-picked and exaggerated a portion of the IPCC report which, as part of an obvious set of improbable, hypothetical scenarios states, "the collapse of [the West Antarctica Ice Sheet]... would trigger another five to six metres [16-19 feet] of sea level rise...that would take many hundreds of years to complete."

The IPCC section from which this hypothetical is lifted is entitled, How Likely are Major or Abrupt Climate Changes, such as Loss of Ice Sheets of Changes in Global Ocean Circulation? The section begins with this disclaimer:

Abrupt climate changes, such as the collapse of the West Antarctic Ice Sheet, the rapid loss of the Greenland Ice Sheet or large scale changes of ocean circulation systems are not considered likely to occur in the 21st century...

That means that over the next 90+ years, even the usually enthusiastic global warming editors at the U.N. are not anticipating the kind of predictions that Gore/Google are spitting out.

The IPCC also states, "All studies for the 21st century project that Antarctic [ice] changes will contribute negatively to sea level..." (italics mine). That means there is more snow and ice accumulating on Antarctica than is breaking off and melting into the surrounding waters. In addition the 2007 report declares, "...for the last two decades...Antarctica as a whole has not warmed."

Regarding the potential collapse of the West Antarctic Ice Sheet, the IPCC says, "...no quantitative information is available from the current generation of ice sheet models as to the likelihood of timing of such an event." And, regarding the swamping of major cities projected by Gore/Google, the report reads, "...accelerated sea level rise caused by rapid dynamic response of the ice sheets to climate change is very unlikely during the 21st century."

Regarding Greenland, the IPCC states: "...the total melting of the Greenland Ice Sheet, which would raise global sea level by about seven metres, is a slow process that would take many hundreds of years to complete...no quantitative information is available from the current generation of ice sheet models as to the likelihood or timing of such an event"

Gore and Google have an agenda-money. For Gore it's the payday he'll secure through carbon trading; for the Google guys, it includes providing critical technology for the energy monitoring plans involved in the coming Smart Grid.

Hmm. Besides the smoldering shorts, I'm noting noses as long as a telephone wire.

Brian Sussman is an award-winning former television meteorologist and current radio host on KSFO, San Francisco. His forthcoming book, "Global Whining: confidence to confront the biggest scam in history," will be published by WND Books and available early next year.
Posted by jtf at 12:26 PM