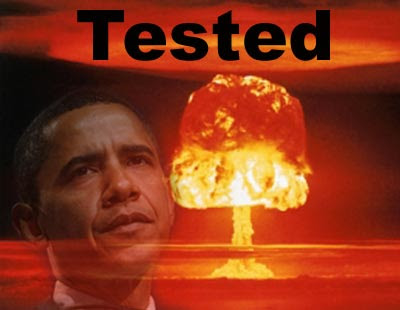 On May 25, the Democratic People’s Republic of Korea conducted an underground nuclear test, allegedly of a 10-to-20 kiloton warhead. The blast registered a 4.52 on the Richter scale, only slightly higher than the 4.1 registered by the test of a less-than-one-kiloton warhead in October 2006. South Korean forces expect the North to test fire ground-to-ship missiles today.

…And thus came to pass the prophecy of Joe Biden, who exhorted attendees of a Seattle fundraiser late last October, “Mark my words, it willnot be six months before the world tests Barack Obama…Remember I said it standing here, if you don't remember anything else I said. Watch, we’re gonna have an international crisis, a generated crisis, to test the mettle of this guy.”

His mettle proved all-too malleable. It was Japanese Prime Minister Taro Aso who called for an emergency meeting of the United Nations Security Council, which pushed through a non-binding resolution and a pledge to meet again to draft a binding one. Obama’s first statement merely told the nation that still calls itself the “Hermit Kingdom” its “behavior…will only serve to deepen North Korea’s isolation. It will not find international acceptance.” Later that morning, he rushed out a second statement, claiming DPRK missiles “pose a grave threat to the peace and security of the world” and are “a blatant violation of international law.”

And then, according to the L.A. Times and the Drudge Report, he went golfing.

Meanwhile, Speaker of the House Nancy Pelosi, on a tour of Shanghai at the time of the explosion, told her hosts they “must use their influence to help bring North Korea to the table for the six party talks” – the same talks whose failure allowed North Korea to cement its place as a nuclear power…and which broke down last year because the North rightly suspected it could get a better deal from the Obama administration.(Near the 20th anniversary of the Tiananmen Square massacre, Madam Speaker pressed China hard – for lower carbon emissions, on the grounds “protecting the environment is a human rights issue”)

North Korea’s nuclear detonation was less a test of his mettle than an inevitable response to cultivated weakness. Over the course of three administrations, the DPRK has perfect the cycle of brinksmanship, blackmail, backtracking, and betrayal. Yet none of its negotiating partners, with the exception of Jimmy Carter, has been so eager to oblige its interests as Barack Obama.

When North Korea first announced its nuclear intentions in 1994, President Clinton signed the Agreed Framework negotiated, in freelance fashion, by Jimmy Carter. Clinton would 500,000 metric tons of oil, more than $100 million in food aid (which the government seized to feed its million-man army), and spent billions building two light-water nuclear reactors. Analysts warned Kim Jong-il could produce enough nuclear material for a handful of weapons within ten years by simply busting the caps on the U.S.-funded reactors, and evidence mounted Pyongyang used these reactors for military as well as civilian purposes. As Clinton stalled, Kim pressed on, lobbing a Taepodong-1 missile over Japan in 1998, then denying U.S. inspectors access to a nuclear facility producing illicit material. Clinton rewarded this defiance with an additional 1.1 million tons of food worth nearly $200 million. Even on his way out of office in December 2000, Clinton sought a new round of appeasement for the DPRK.

President Bush fared little better. Reviled for “going it alone,” he outsourced negotiations concerning the nuclear concern to the multilateral, six-party talks. Condoleeza Rice and others convinced Bush to jettison his original firm stance following the last underground detonation in 2006. After Pyongyang filed a late, fictitious report of its activities, Bush simply agreed to accept the lie as fact; he rewarded deception by granting generous aid, helping transfer funds formerly held up in overseas banks, and removing North Korea from the list of state sponsors of terrorism and producers of narcotics – all despite the fact that the new agreement lacked verification.

However bad the situation had been, President Obama made matters materially worse. Republican criticism of offering talks without preconditions was not merely election rhetoric: preconditions are a two-way affair, and when one drops his own, gravity shifts toward fulfilling those of his enemy.

North Korea has already rejected two pre-emptive offers of direct, bilateral talks with the Obama administration, opting to school the appeaser-in-chief in the fine art of nuclear blackmail.

The Obama administration attempted to unveil the proverbial “reset button” with Pyongyang, as Hillary Clinton tried to coax Kim back to the six-party talks with the promise of a treaty and (more) aid. On the eve of her February visit to Seoul, the worker’s paradise threatened to test a Taepodong-2 missile and declared itself “fully ready for an all-out confrontation” with South Korea, yet Madam Secretary told the Asia Society:

If North Korea is genuinely prepared to completely and verifiably eliminate their nuclear weapons program, the Obama administration will be willing to normalize bilateral relations, replace the peninsula’s long-standing armistice agreements with a permanent peace treaty, and assist in meeting the energy and other economic needs of the North Korean people.

She helpfully suggested Kim Jong-il “avoid any provocative action or unhelpful rhetoric toward South Korea.” (Like Nancy Pelosi, she too wanted to renew military contacts with China but had tough rhetoric for Beijing on carbon emissions.)

The DPRK responded with harassment and missile fire. It arrested two American journalists, who face “trial” next month. More troubling to international security, the regime tested its long-range Taepodong-2 missile, again over Japanese airspace. That month in Prague, Obama asserted, “All nations must come together to build a stronger, global regime” to confront Pyongyang. However, the UN Security Council responded by passing a non-binding resolution calling on members to begin following the measures set out in Resolution 1718, passed nearly three years earlier, which members had ignored. (Eventually three companies faced sanctions.) Obama deemed this a “clear and united message.”

According to the South Korean media, North Korea immediately began building or rebuilding nuclear sites. The North openly vowed it “will never again take part in such talks and will not be bound by any agreement reached at the talks.” Speaking before the Senate Appropriations Committee earlier this month, Hillary called the North’s return to the negotiating table “implausible.”

Obama hoped to make the implausible come to pass by offering bilateral talks in early May, which North Korea again rejected. Obama’s Special Representative for North Korea Policy Stephen W. Bosworth has made several entreaties for a tête-à-tête in Pyongyang, only to be refused. Earlier this month a bewildered Bosworth pleaded, “President Obama has stressed on numerous occasions that the door to dialogue remains open [and] that we are committed to resolving the problems that we face through negotiation and dialogue. So I don’t think that we can be interpreted as having a hostile policy.” Indeed, he does not have a hostile policy to nuclear blackmail, betrayal, and brinksmanship. That is the problem.

The inevitable response to American weakness came yesterday, and possibly today. The North is in its brinksmanship mode. It will likely return to blackmail, once succession issues are settled over Kim Jong-il’s dead or incapacitated body. However, all candidates to become the next Beloved Leader know the louder the saber-rattling, the more desperate the cries for silence – and the richer the benefits offered. If Obama will offer direct, bilateral talks without any prodding whatever, more plunder can be exacted in due time. The nuclear test also leaves the hermit kingdom more capable of selling its publicly tested wares on the black market to Syria, Iran, or other anti-American states.

As Obama struggles to cobble together a response – beyond “Fore!” – a dangerous world grows more deadly on his watch. Iran has sent six warships into international waters, and last week it completed a test of the Sejil-2 missile, which Defense Secretary Robert Gates verified as “successful.” The new generation missile, an improvement over its Shahab predecessors, has a range of 1,200-1,500 miles, putting Israel and U.S. bases in the Persian Gulf in range. Rather than take harsh measures against Tehran’s genocidal theocrats, Obama has given them one year to continue their nuclear program before any hint of a reckoning; coincidentally, Chairman of the Joint Chiefs of Staff Adm. Mike Mullen told ABC’s This Week program on Sunday Iran could have a nuclear warhead within “one to three years.” Following North Korea’s nuclear test yesterday, Iranian President Mahmoud Ahmadinejiad rejected a “freeze-for-freeze” offer, halting its nuclear program in return for an assurance the West will pursue no further sanctions. He responded, “The nuclear issue is finished for us,” adding, “countries like America are not able to manage the political atmosphere.”

In nuclear brinksmanship, North Korea has finally found an export industry. In the Obama administration, the two rogue states have found either a willing subsidizer or an oblivious enabler.