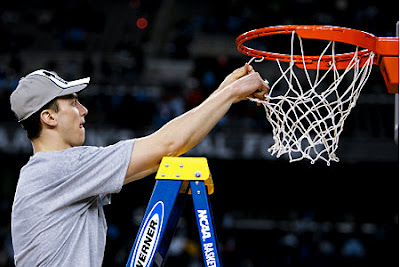 Tyler Hansbrough and Roy Williams (below) lead UNC to a convincing win over Michigan State on Monday night.

DETROIT - This is how it still looks in sports when you play your best game in the biggest game. This is how it looks on the biggest stage you've ever had and might ever have in your life, and your team becomes everything it was ever supposed to be. That's what it was like for the North Carolina Tar Heels on the night when they won their school its fifth national championship in college basketball, became the great college basketball team you thought they would be at the start of the season, when you really thought with the size and speed and talent and depth they had, that the Tar Heels might win them all. All this Michigan State green inside Ford Field Monday night, drowning in all that Carolina blue, 89-72 when it was all over.

That is the way it really was, almost from the first minutes of the game, Carolina coming at State in waves, coming at them with Deon Thompson and Tyler Hansbrough inside and Wayne Ellington - playing his best game, in his biggest game - outside and Ty Lawson everywhere else. By the time they were ahead 20 points in the first half, and they were ahead 20 when the game was just 10 minutes old, you wondered how Boston College beat Carolina in Chapel Hill this year, and how Florida State got them, and Maryland and Wake Forest.

Tom Izzo, the State coach, had talked about "winning the weekend." North Carolina won the weekend, it won the March part of March Madness, it won April. Won it all. Won it with as much talent, on the court and on the bench, as any basketball champion has had lately, and maybe ever. Here is what you have to know about the basketball game that Carolina and State played Monday night in front of more than 70,000 in Detroit, maybe 60,000 of them State fans:

When State cut the Carolina lead to 13 points with five minutes left, the place went mad. 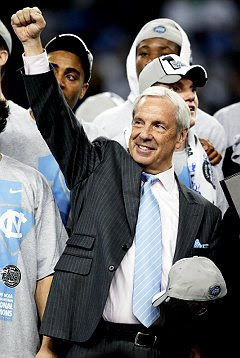 And even then the score was misleading, for all of State's heart, because this game was won in the first half and was over at halftime. Ellington was too good on offense and Lawson (seven steals) was too good on defense. And Carolina was great when it was supposed to be, on the first Monday in April.

All day long, even with the snow blowing through Detroit, there really was green everywhere on the streets near Ford Field, caps and sweatshirts and parkas, sometimes giving you the idea it stretched all the way across the water to Canada. State fans knew all about Carolina's talent, everybody did; once the tournament started and they started making it look easy, you wondered how they lost the four games they did. But State had knocked off Louisville and knocked off UConn on Saturday, and so their players and fans and and even their coach had begun to believe they could pull this off. Just because it had happened before on this Monday night in college basketball.

It had happened with Jimmy V. and Rollie Massimino. Why couldn't it happen here in Detroit, at a time when the city and state needed a team and a run like this?

After Saturday's game, Izzo had talked about this kind of chance, "(seeing) if we can make the dream, the miracle, come true, one more time."

Then the game started, after Magic Johnson and Larry Bird had come out on the court and stood together, 30 years after they had played the most-watched NCAA final ever played. Then it was clear that Michigan State would have needed at least one of them in his prime to play with North Carolina Monday night. Sometimes sports really does go back to the old Runyon line: The race isn't always to the swift nor the battle to the strong, but that's the way to bet. And it trumps romance almost every single time.

Carolina had just four turnovers in the first half. When it was 48-25 for them with four minutes left in the half, they were shooting nearly 60% at the time and it seemed like 160%, because it was as hard trying to remember missed shots as it was for Michigan State trying to play with them on this night. Ellington and Ed Davis, the 6-11 freshman whom Williams tried to hide to keep him out of pro basketball for at least another year. Ty Lawson and Hansbrough.

When Ellington broke away form everybody after another State turnover and threw down a slam with exactly one minute left in the half, North Carolina had 55 points and no team had ever scored more in the first half of a championship game.

"It's not like we've dodged anybody so far," Izzo had said, talking about his team's last three tournament wins, against last year's national champion Kansas, then top-seeded Louisville and UConn. And State hadn't dodged anybody. You had to give them a chance. Until it was clear less than 10 minutes into this that they had no chance to win a national championship off North Carolina Monday night.

Lawson had seven steals at halftime. Ellington wouldn't miss. Davis looked like he will someday be the best NBA player out of all of them. They came at you inside and outside and seemed to have saved their best defense of the whole season for the biggest game of their lives, at least so far. On the Monday night of the season, Carolina beating State the way they beat everybody else in March and April, it seemed as if the worries about Lawson's injured toe were from another season now.