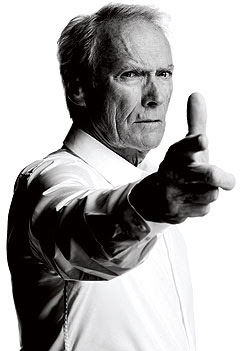 In a rare interview as he stars in Gran Torino, the Hollywood legend opens up about the "pussy generation," America's blasé remembrance of 9/11, Barack Obama achieving the unimaginable, the beginning of his acting career (hint: good-lookin' chicks), and, yes, that grunt.

By Cal Fussman
[more from this author]

Born in San Francisco and raised throughout northern California, Eastwood attended Los Angeles City College under the G. I. Bill and served as mayor of Carmel, California from 1986 to 1988.

In the first place, I was taller than most kids in my classes. In the second, we were always moving. Redding. Sacramento. Pacific Palisades. Back to Redding. Back to Sacramento. Over to Hayward. Niles. Oakland. So we were constantly on the road, and I was always the new guy in school. The bullies always thought, Here's this big gangly guy. We gotta take him on. You know how kids are. We gotta test him. I was a shy kid. But a lot of my childhood was spent punching the bullies out.

I kind of had a feeling "Make my day" would resonate, based upon "Do you feel lucky, punk?" in the first movie. I thought that Smith & Wesson line might hang in there, too. But "Make my day" was just so simple.

I still get it a lot.

As you get older, you're not afraid of doubt. Doubt isn't running the show. You take out all the self-agonizing.

What can they do to you after you get into your seventies?

Even in grammar school they taught you to go with your first impression. It's like multiple-choice questions. If you go back and start dwelling, you'll talk yourself out of it and make the wrong pick. That's just a theory. I've never seen any studies on it. But I believe it.

As Jerry Fielding used to say, "We've come this far, let's not ruin it by thinking."

My father had a couple of kids at the beginning of the Depression. There was not much employment. Not much welfare. People barely got by. People were tougher then.

We live in more of a pussy generation now, where everybody's become used to saying, "Well, how do we handle it psychologically?" In those days, you just punched the bully back and duked it out. Even if the guy was older and could push you around, at least you were respected for fighting back, and you'd be left alone from then on.

The band guys were looked down upon when I was a kid. I remember playing the flügelhorn and everybody said, "What the...?"

I don't know if I can tell you exactly when the pussy generation started. Maybe when people started asking about the meaning of life.

If I'd had good discipline, I might have gone into music.

You wonder sometimes. What will we do if something really big happens? Look how fast -- seven years -- people have been able to forget 9/11. Maybe you remember if you lost a relative or a loved one. But the public can get pretty blasé about stuff like that. Nobody got blasé about Pearl Harbor.

I remember buying a very old hotel in Carmel. I went into an upper attic room and saw that all the windows were painted black. "What was going on here?" I asked the prior owners. They said they thought the Japanese were off the coast during the war.

The Korean War was only a few years after World War II. We all went. But you couldn't help but think, Shit. What the hell? What have we gained? One minute you're unleashing the tremendous power of nuclear fission, and then a few years later you're jockeying back and forth on the 38th parallel. It seemed so futile.

In Changeling, I tried to show something you'd never see nowadays -- a kid sitting and looking at the radio. Just sitting in front of the radio and listening. Your mind does the rest.

I remember going to a huge waterfall on a glacier in Iceland. People were there on a rock-platform overlook to see it. They had their kids. There was a place that wasn't sealed off, but it had a cable that stopped anybody from going past a certain point. I said to myself, You know, in the States they'd have that hurricane-fenced off, because they're afraid somebody's gonna fall and some lawyer's going to appear. There, the mentality was like it was in America in the old days: If you fall, you're stupid.

You can't stop everything from happening. But we've gotten to a point where we're certainly trying. If a car doesn't have four hundred air bags in it, then it's no good.

My father died very suddenly at sixty-three. Just dropped dead. For a long time afterward, I'd ask myself, Why didn't I ask him to play golf more? Why didn't I spend more time with him? But when you're off trying to get the brass ring, you forget and overlook those little things. It gives you a certain amount of regret later on, but there's nothing you can do about it. So you just forge on.

Smaller details are less important. Let's get on with the important stuff.

I've got a good crew that is very familiar with me. I don't have to say a lot to 'em. We just set up the shot, and I depend on everybody to do their parts. I just say, "Okay...."

What happened is I was going to college in 1950. L. A. City College. A guy I knew was going to an acting class on Thursday nights. He started telling me about all the good-lookin' chicks and said, "Why don't you go with me?" So I probably had some motivation beyond thoughts of being an actor. And sure enough, he was right. There were a lot of girls and not many guys. I said, "Yeah, they need me here." I wound up at Universal as a contract player.

People love westerns worldwide. There's something fantasylike about an individual fighting the elements. Or even bad guys and the elements. It's a simpler time. There's no organized laws and stuff.

The last one I did was in '92. Unforgiven. That was a wonderful script. But it seemed like it was the end of the road for me with the genre, because it sort of summarized everything I felt about the western at that particular time.

I had an issue before the council. I remember getting up, and there was a lady who sat and knitted the whole time, never looked up. "No, no, no," she said. And I thought, This can't be. When you're elected, you have to at least pretend like you're interested in what people are there for. How do you have the chutzpah to just sit there, not pay attention, not interact at all? It needed to be corrected. 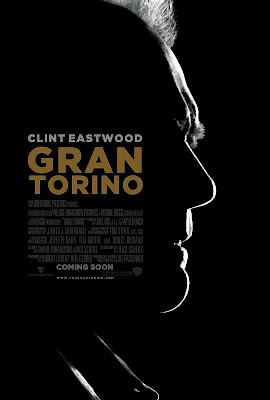 It's making sure that the words "public servant" are not forgotten. That's why I did it. 'Cause I thought, I don't need this. The fact that I didn't need it made me think I could do more. It's the people who need it that I'm suspect of.

Barack Obama was unimaginable back when I was a kid. Count Basie and a lot of big bands would come through Seattle when I was young. They could play at a club, but they couldn't frequent the place.

When you listen to Ray Charles, there's never any doubt whose voice that is.

You should really get to know somebody, really be a friend. I mean, my wife is my closest friend. Sure, I'm attracted to her in every way possible, but that's not the answer. Because I've been attracted to other people, and I couldn't stand 'em after a while.

I'm past doing one chin-up more than I did the day before. I just kind of do what I feel like.

I have children by other women. I gotta give Dina the credit for bringing everyone together. She never had the ego thing of the second wife. The natural instinct might have been to kill off everybody else. You know, the cavewoman mentality. But she brought everybody together. She's friendly with my first wife, friendly to former girlfriends. She went out of her way to unite everybody. She's been extremely influential in my life.

I'm not one of those guys who's been terribly active in organized religion. But I don't disrespect it. I'd never try to impose any doubts that I might have on anyone else.

As you get older, you like kids a lot more.

Kids piercing themselves, piercing their tongues -- what kind of masochism is that? Is it to show you can just take it?

That's why I don't rehearse a lot and why I shoot a lot immediately. I have ideas of where I'd like to take the character, but we both end up going together.

We were doing In the Line of Fire, and John Malkovich was on top of the building, and he has me in a real precarious situation. My character is crazed and he pulls out a gun and sticks it into John's face, and John puts his mouth over the end of the gun. Now, I don't know what kind of crazy symbol that was. We certainly didn't rehearse anything like that. I'm sure he didn't think about it while we were practicing it. It was just there. Like Sir Edmund Hillary talking about why you do anything: Because it's there. That's why you climb Everest. It's like a little moment in time, and as fast as it comes into your brain, you just throw it out and discard it. Do it before you discard it, you know?

It keeps coming back to "We've come this far, let's not ruin it by thinking."

You look at Velázquez in his dark years and you wonder, How the hell did he get that way? I'm sure he didn't say to himself, "I'm in my dark period right now, so I'm going to paint this way." He just did it. That's when real art gets a chance to come into play.

Million Dollar Baby won the Academy Award. That was nice, that was great. But you don't dwell on it. An awful lot of good pictures haven't won Academy Awards, so it doesn't have much bearing. Letters from Iwo Jima was nominated for an Academy Award. We didn't win it, but that picture was still as good as I could do it. Did it deserve it less than some other picture? No, not really. But there are other aspects that come into it. In the end, you've just got to be happy with what you've done. There you are.

- Eastwood stars in Gran Torino, currently in theaters. It is his twenty-ninth film as a director.