PSU women set it up 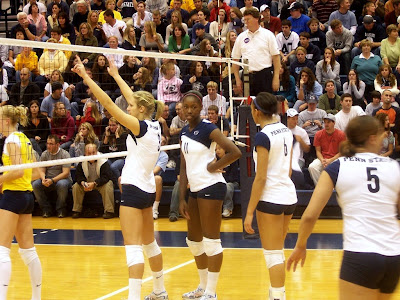 The road to championships in Division I college volleyball -- women's and men's -- is a continuous loop that begins and ends at Penn State.

From the women winning a national championship in the winter of 2007, to the men claiming a national title the following spring, to the present -- the top-ranked women are poised to begin defense of their national crown Friday by hosting Long Island in Rec Hall -- Penn State is enjoying a continuous success of an historic nature.

In a sport where the power base is far west of the Mississippi River, Penn State joined Stanford's 1996-97 teams as the only schools in NCAA history to win women's and men's national championships in the same academic year.

"Certainly, the West Coast has won the majority of national championships on both the men's and women's sides," said Penn State women's coach Russ Rose, who's in his 30th season. "But, the fact that Penn State has found its way to the championship podium a few times in both sports is an indication that it can be done."

"I wish it was something that was a secret, but I just think the women playing for Russ are some of the best players I've ever seen," he said. "The same is true of the guys on our team.

"It's like a perfect storm is brewing, and it seems like it's centered right over Rec Hall."

That storm of success is a source of pride for Salima Rockwell, the former Penn Hills High School player who earned All-America recognition playing for Rose from 1991-94. She now is in her third year back with the women's program -- as director of volleyball operations in 2006 and as an assistant coach the past two seasons.

"To have kind of the center of volleyball be here, certainly last (school) year with two national championships, I think it's easy for people to see that we know what we're doing," Rockwell said.

Penn State's volleyball success is all the more striking under closer examination. Consider:

• The Lions (32-0) are the first collegiate women's team to go an entire season without losing a single set.

• The women have won an NCAA-record 58 consecutive matches. Its Big Ten win streak stands at 45.

• The two women's national titles (1999 and 2007) are the only Division I championships won by a school east of Nebraska.

• The two men's national titles (1994 and 2008) are the only Division I championships won by a school east of Utah. (Lewis, Ill., had to vacate its 2003 title for using ineligible players.)

The success comes from within the Commonwealth, as both Penn State programs boast in-state players.

That success has not been lost on the school's student body, even in the midst of a Rose Bowl season for the football team.

"The athletes really do a good job of supporting each other," said Harmotto, a 6-foot-2 senior All-America middle hitter from Aliquippa. "We know a lot of the football guys and other athletes. It's just one, big athletic family, I suppose.

"We've had great crowds. We had close to 6,000 (Nov. 21 vs. Northwestern). Obviously, it helps that it was the Rally in the Valley for the football team, but we're definitely getting a larger student following."

The women's pursuit of a perfect season, both in terms of sets and matches, became a prominent subplot -- but not to Rose.

"It's special because everybody else talks about it," he said. "It's not special to me. This team's goal is to try to defend its national championship."

Some downplay the men's success because there are just 23 Division I programs nationwide, compared with 331 women's programs. 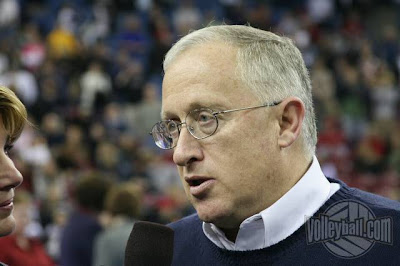 "I don't wear any championship rings or anything that would give anybody an idea of any of those sort of things that I've been a part of," he said. "My job is to help the players have a chance to be successful."

Rose has done just that. He began the season as one of just three volleyball coaches with more than 900 career wins. His winning percentage of nearly 86 percent is tops among active coaches, and he is already in the American Volleyball Coaches Hall of Fame.

While much has been made of the fact that Joe Paterno has been on the staff for more than half of the 800 all-time football wins for Penn State, Rose (957 wins) has been the head man for more than nine-tenths of the Nittany Lions' women's volleyball victories.

"I'm the guy that gets the publicity," Paterno said at a recent football pep rally, "but the best coach on this campus is Russ Rose."

Rose allowed himself a slight smile when he heard that.

"You appreciate it," Rose said, "when it comes from Joe Paterno."

Rose's reputation is that of a no-nonsense guy, which he attributes to his Chicago roots.

"Brutally honest," junior setter Alisha Glass said in describing her coach. "He knows what it takes to win, whether it's looking at statistics, whether its minimizing errors or just knowing how to push a player. Even when you don't necessarily want to hear it, he knows what he's talking about."

The Rose candor is what first attracted Rockwell to the program as a player and brought her back as an assistant.

"Brutally honest? That's probably fair," Rockwell said. "Someone's got to be, and I think that's his job. We always get the players that understand that and want that."

Rose makes no apologies for his style.

"I keep thinking it's my responsibility to treat these players the way I treated my players 30 years ago as well," he said. "I run into problems with that because this is a new era of soft, entitled kids that feel that everybody owes them the world, and I'm just too negative and not telling them how lovely they are.

"Every now and then, you get a throwback, and it's great. Salima was. I never had any problems with Salima. Christa Harmotto, the same. I've had a number of kids from Western Pennsylvania -- that's great stock.

"I was from Chicago. It was the same thing. The kids I recruited from the Midwest, their parents, they didn't own the companies. They worked. They worked the third shift. Those people understand what challenges are about. Their kids are a little tougher. They're not spoiled."

When Rose sees a combination of athletic ability and blue-collar work ethic, he knows he has something special.

Such is the case with Harmotto, who was recently named ESPN the Magazine's Academic All-American of the Year.

Harmotto is seen as the volleyball equivalent of former Penn State All-America linebacker Paul Posluszny, who won ESPN's Academic All-American of the Year honor in 2006 and now plays for the Buffalo Bills.

She and Posluszny even had to overcome knee injuries at almost the same time.

"Everybody was asking what was in the water in Hopewell Township," said Harmotto, whose family has socialized with the Poslusznys. "But we both recovered fine."

"I've been coaching for 34 years, and there's a few players that you would say, 'I would sign to coach them forever,' and she'd be right at the top of that list," he said. "She's so full of life. She's a giver. Everybody gets energy from her. Her academic success, her community involvement -- someone asked me if I knew she teaches Sunday school, I'm like, 'I didn't know, but I'm not surprised.' "

Harmotto's career is winding down, but it's already been all that she had hoped it could be.

* -- Those titles were later vacated