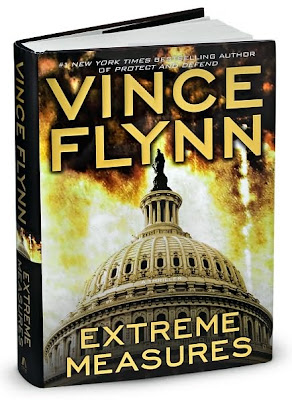 If I had the mythical wallet of endless wealth, I would buy up a few hundred thousand copies of EXTREME MEASURES, Vince Flynn’s latest Mitch Rapp novel, and start passing them out on street corners. Given that it’s that time again, when the American electorate is about to decide who is going to drive the Lexus for the next four years, one needs to make informed decisions. And if you haven’t considered the issues raised in this book, I would suggest that you really need to take that extra step.

EXTREME MEASURES brings Rapp and his colleague/protégé Mike Nash together for what may well be their ultimate mission. The CIA has detected and captured two terrorist cells; information indicates that yet a third is on a mission that is all but certain to take place in dramatic fashion on U.S. soil. Rapp and Nash are in the midst of a rough but effective interrogation when they are interrupted by agents of their own government --- the government of the country they are sworn to protect --- and, in an almost Orwellian but realistic turn of events, Rapp finds himself subject to arrest for fighting a war in defense of his country.

While focusing on domestic espionage and over-the-shoulder views of terrorist planning, the primary mission of EXTREME MEASURES is to examine the enemy within --- the questionably well-intended members of government who seem to delight in hamstringing military personnel with rules as they fight against an enemy who understands that the main rule of warfare is to win at any cost. While Rapp is brought before the judiciary committee in proceedings that are most generously described as being similar to a kangaroo court, a terrorist cell plots a multifaceted series of events designed to strike at the heart of the government that seems obsessed, against all logic, with protecting their rights while disregarding the health and safety of its own citizens.

As he has before, Flynn demonstrates that he truly understands the psyche of the enemy. To put it in plain terms, these guys are really scary, primarily because they are so realistic. Led by an erratic mastermind whose goal is to become the acknowledged leader of al-Qaeda, the terrorist cell slowly but steadily executes a by-the-numbers plot that will paralyze the country, while Rapp, perhaps the only person who has a prayer of successfully terminating their operation, is short-leashed by a judiciary committee headed by an egocentric chairman in love with the sound of her own voice. As the book races toward a catastrophic, and ironic, conclusion, more than one perfumed prince comes to realize that inaction, as well as action, can result in tragic consequences that reach further than can be anticipated.

Flynn’s latest effort is complete in itself, with a beginning, middle and definite ending. Be forewarned, however: it is only the first half of a story that will not see its climax until 2009. Please don’t vote without reading EXTREME MEASURES.

Click here now to buy this book from Amazon.com.
Posted by jtf at 7:19 AM

I had to read this book for a school project and I thoroughly enjoyed reading it.