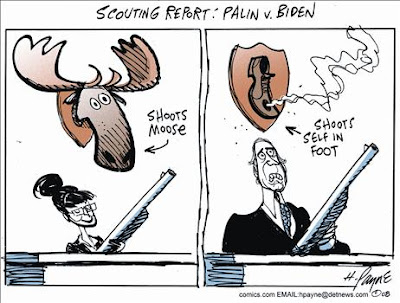 While Gov. Sarah Palin is being grilled on her position on mark-to-market accounting rules, the press can't bother to ask Joe Biden if he could give us a ballpark estimate on when Franklin D. Roosevelt was president -- or maybe take a stab at guessing the decade when televisions were first available to the public.

Being interviewed by Katie Couric on the "CBS Evening News," Biden said: "When the stock market crashed, Franklin D. Roosevelt got on the television and didn't just talk about the, you know, the princes of greed. He said, 'Look, here's what happened.'"

Other than that, the statement holds up pretty well. At least Biden managed to avoid mentioning any "clean" Negroes he had met.

Couric was nearly moved to tears by the brilliance of Biden's brain-damaged remark. She was especially intrigued by Biden's claim that FDR had said the new iPhone was the bomb!

Here is Couric's full response to Biden's bizarre outburst about FDR (a) being president and (b) going on TV in 1929: "Relating to the fears of the average American is one of Biden's strong suits."

But when our beauteous Sarah said that John McCain was a better leader on the economy than Barack Obama, Couric relentlessly badgered her for evidence. "Why do you say that?" Couric demanded. "Why are they waiting for John McCain and not Barack Obama? ... Can you give us any more examples of his leading the charge for more oversight?"

We are currently in the middle of a massive financial crisis brought on by Fannie Mae. McCain was right on Fannie Mae; Obama was wrong. That's not enough?

Not for the affable Eva Braun of evening TV! "I'm just going to ask you one more time," Couric snipped, "not to belabor the point. Specific examples in his 26 years of pushing for more regulation?"

This would be like responding to someone who predicted the 9/11 attacks by saying: OK, you got one thing right. Not to belabor the point, but what else?

Obama was not merely wrong on Fannie Mae: He is owned by Fannie Mae. Somehow Obama managed to become the second biggest all-time recipient of Fannie Mae political money after only three years in the Senate. The biggest beneficiary, Democratic Sen. Chris Dodd, had a 30-year head start on receiving loot from Fannie Mae -- the government-backed institution behind our current crisis.

How does the Democratic ticket stack up on other major issues facing the nation, say, gas prices?

Shockingly, Sen. Joe Biden was one of only five senators to vote against the first Alaskan pipeline bill in 1973. This is like having been a Nazi sympathizer during World War II. If Sarah Palin does nothing else, she has got to tie that idiotic pipeline vote around Biden's neck.

The Senate passed the 1973 Alaskan pipeline bill by an overwhelming 80-5 vote. Only five senators voted against the pipeline on final passage. Sen. Biden is the only one who is still in the Senate -- the other four having been confined to mental institutions long ago.

The stakes were clear: This was in the midst of the first Arab oil embargo. Liberal Democrats, such as senators Robert Byrd, Mike Mansfield, Frank Church and Hubert Humphrey, all voted for the pipeline.

But Biden cast one of only five votes against the pipeline that has produced more than 15 billion barrels of oil, supplied nearly 20 percent of this nation's oil, created tens of thousands of jobs, added hundreds of billions of dollars to the U.S. economy and reduced money transfers to the nation's enemies by about the same amount.

The only argument against the pipeline was that it would harm the caribou, an argument that was both trivial and wrong. The caribou population near the pipeline increased from 5,000 in the 1970s to 32,000 by 2002.

It would have been bad enough to vote against the pipeline bill even if it had hurt the caribou. A sane person would still say: Our enemies have us in a vice grip. Sorry, caribou, you've got to take one for the team. But when the pipeline goes through and the caribou population sextuples in the next 20 years, you really look like a moron.

We couldn't possibly expect Couric to ask Biden about a vote that is the equivalent of voting against the invention of the wheel. But couldn't she have come up with just one follow-up question for Biden on FDR's magnificent handling of the 1929 stock market crash?

Or here's a question the public is dying to know: "If Obama wanted a historically delusional vice president, why not Lyndon LaRouche?" At least LaRouche didn't vote against the Alaskan pipeline.
Posted by jtf at 5:16 AM