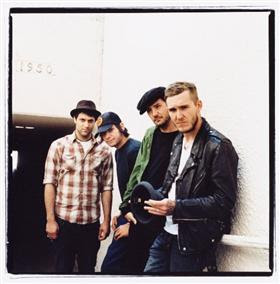 Maybe there is no new music, just new combinations of old music. Bob Dylan idolized Woody Guthrie and Little Richard, and look what happened. Bruce Springsteen has said that he wanted to write like Dylan, sing like Roy Orbison and sound like Phil Spector on his classic "Born To Run" album.
A New Brunswick band, The Gaslight Anthem -- which will open for Rise Against at New York's Roseland Ballroom, tomorrow and Tuesday -- has become one of the rock world's great young hopes by combining previously unsynthesized elements of New Jersey rock: the gritty romanticism and streetwise poetry of early Springsteen and the hard-driving, punk-influenced sound of bands like Bouncing Souls, Lifetime and Thursday.
"I had to blend it together somehow," says frontman Brian Fallon, 28. "I couldn't ignore either side."

Benefiting from a huge amount of underground buzz, the band's second album, "The '59 Sound" -- released by Los Angeles indie label SideOneDummy in August -- debuted at No. 70 on Billboard magazine's albums chart. It also has earned the band a cover story in British rock magazine Kerrang! (which pronounced it, "The best new band you'll hear in 2008") and an almost equally enthusiastic Rolling Stone feature (with the headline, "Punk Rock, Via E Street").

"It feels good right now," says Fallon. "We're been in various bands that have kind of sputtered and coughed and choked, for a long time. But it seems like we're starting to get that thing where even our parents are like, 'Hey, this is pretty exciting.'"

The band's musical influences extend beyond the Jersey border. "I'da Called You Woody, Joe," from their 2007 debut album, "Sink or Swim," was about Joe Strummer of The Clash. "Say I Won't (Recognize)," from their four-song, early-2008 EP "Senor and the Queen," reworked Sam Cooke's "Having a Party."

Various songs on "The '59 Sound" make references to Bob Seger, Tom Petty, Otis Redding and Elvis Presley, as well as Springsteen: "No surrender, my Bobby Jean," pleads Fallon in his rough-hewn voice, in "Meet Me By the River's Edge." Even the album's name was inspired by the 1959 Fender Bassman amplifier used by Springsteen and many other classic-rock musicians. 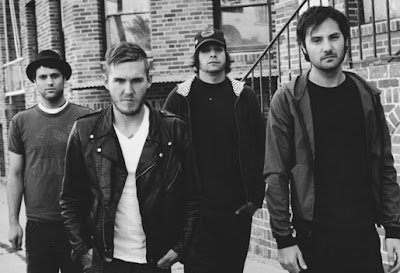 "We're fully aware that we're not reinventing any styles here," says Fallon, who writes the band's lyrics, though guitarist Alex Rosamilia, bassist Alex Levine and drummer Benny Horowitz co-write the music. "We're just trying to carry on a tradition of music that, in our minds, has been a bit neglected in the past 15 years: any kind of classic rock 'n' roll bands, your Elvis Presleys and your soul bands -- your Otis Reddings and Wilson Picketts.

"No one is listening to those guys right now, as far as in my age group. And I think that, mixed with your punk-rock bands like the Bouncing Souls ... combining them was one of those lightning bolt moments. You can't take any credit for it at all. It just kind of came down and hit you, and you're like, 'That's a good idea.'"

The Rise Against tour, which also features the bands Alkaline Trio and Thrice, began Oct. 2 in Cleveland and lasts through late November. After that, the band has a few U.K. shows lined up, then it will return home for the holidays, and probably make a few Jersey appearances around then.

"It's been amazing," says Rosamilia, 26. "I've never played places this big before -- none of us have. Usually the first band doesn't see much of a crowd response, but the crowds have been great so far -- singing along and just getting into it."

The band has only been around since January 2006. Before that, Horowitz and Rosamilia had been in a New Brunswick group called The Killing Gift. Horowitz had also been in The Low End Theory, another local band, and Fallon had been appearing at coffeehouses in Red Bank, where he grew up.

"At the same time, I would play a lot of the basement shows in New Brunswick with a punk-rock band," says Fallon. "Me and Benny and both of the Alexes had all been mingling around the same scene, but never had played together. It almost seemed like we played with everyone else, except for each other."

Brian Fallon, the band’s lead singer, performing at the Knitting Factory in August.
A mutual friend suggested that Fallon and Horowitz join forces. "And then we kind of brought in the rest of the pieces," says Fallon. "It was really strange how well it fit together, and the way we did it that first practice. I think we still do it, when we write songs. No one tells anybody else what to do. They just go with it, and no one says a word. Everybody just does what they think is the best for the song."

They took "Gaslight" from the New York cafe where Bob Dylan once played. (In 2005, Dylan released an album called "Live at The Gaslight 1962.") "Anthem" seemed right because so much of the music they were making sounded anthemic.

They began touring, and released "Sink Or Swim" on the New Brunswick label XOXO in May 2007. A European tour in September 2007 showed them just how far their music had spread.

"The kids were singing along to our songs," says Rosamilia. "You'd try to talk to them afterward, but they didn't speak English. So there are these kids that can't converse with you, but they can sing along to your songs.

"It definitely took me aback. I wasn't expecting anything even close to that. I was expecting everything to be empty rooms. But everything was packed. It was pretty ridiculous."

In their brief time together, they have also played the Warped Tour, and hit the road with Bouncing Souls.

"We look up to those guys a lot," says Fallon. "They're not our elders, because they're not that much older than us, but we respect those guys, very heavily. To be able to play with those guys and hang out with them is really great."

He has not yet met Springsteen, though one of Springsteen's sons has attended a Gaslight Anthem show.

"Just this week, I got a call from our manager, and she told us to go look at Bruce Springsteen's MySpace page," he says. "And we go look at it, and we're his first friend, on his legit MySpace page.

"I don't know if he's even heard us, or it's just that his son likes us. But I hope that someday I can get to meet him and just be like, 'Man, I think you're great.'"

http://www.nj.com/entertainment/music/index.ssf/2008/10/anthem_salutes_the_greats.html
Posted by jtf at 10:10 PM