Why we all love the Boss 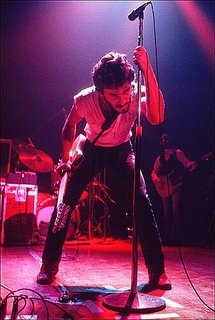 As Bruce Springsteen starts his British tour and a new exhibition of iconic photographs opens, famous fans define his appeal.

By Laura Barnett and Andrew Perry

It's a gatefold album cover that lives in the memory: Bruce Springsteen leaning against his friend and collaborator Clarence Clemons, laughing with sheer pleasure at the glory of the music they were making.

It made Born to Run an iconic album before you had heard a single track. As Springsteen himself acknowledged, "I always thought it was one of those records you didn't have to hear. When you saw the cover, you said, 'I want that one.' "

But photographer Eric Meola took more than 700 photographs that day in 1975 in his New York City studio. And they have never been exhibited on the walls of a gallery, until now.

The enterprising Snap Gallery at Fort Dunlop in Birmingham is hosting an exhibition of Meola's favourite images from the shoot, and offering limited editions for sale.

The show coincides with the start of the UK leg of Springsteen's tour with the Seeger Sessions band, in Birmingham tonight, and with the publication of a book of the photographs.
It also offers an opportunity for people to remember why they love Springsteen.

The way I discovered Springsteen was pretty special: it felt like serendipity. It was Christmas and I was 14, just flicking TV channels. Suddenly I saw him on The Old Grey Whistle Test - footage of him playing Thunder Road live at Madison Square Garden in 1979.

Just hearing the piano and harmonica made me think, 'Wow, what's that song?' The next day I bought the album, and then the rest of them in chronological order. I spent the next four years listening to nothing but Springsteen.

The first ever gig I went to was Bruce in 1985. I went with my whole family – a real day out. I loved his musical ethic, the idea that he was there to do a job, but with real musicianship. It was Springsteen who started me thinking about what I wanted to do with my life. I didn't know I had music in me.

Show a little faith, there's magic in the night
You ain't a beauty but, hey, you're alright
Oh, and that's alright with me

The thing about Springsteen is the size and scale of his performances. However ludicrous and overblown it might seem at times, it's still brilliant.

His basic theme is, I've got a crap life and one day I broke away. That's got to appeal to a lot of people. And he's got this very un-British sense of getting in a car and driving the open road. Springsteen's music has this great sense of freedom.

Thunder Road and Born to Run are the best songs in rock and roll. They're cinematographic – like a movie and music in tandem. They'll still be playing those songs in a thousand years' time. In fact, I bet they're playing them on other planets right now.

But Springsteen isn't just a stadium rocker – he's flesh and blood. When I was in New York after 9/11 for Newsnight, I met the widow of a fireman who had died at the World Trade Centre. Springsteen had rung her up to offer condolences. I thought, I'm really with Springsteen on this.

Got a wife and kids in Baltimore, Jack
I went out for a ride and I never went back
Like a river that don't know where it's flowing
I took a wrong turn and I just kept going

I was playing in bands and writing songs at 12. It was the time when Born in the USA was always on TV. I wasn't particularly into him at the time – I listened to punk and metal, and I thought Springsteen was something for another generation.

The only album I really liked was Nebraska, because he recorded it on an eight-track tape recorder. It was inspiring.

As I got older, I started to appreciate the rest of Springsteen's stuff. He's a great storyteller; he takes you away for three or four minutes, into a story.

And there's this visual element, this Americana vision. I'm from LA, and at first I had no idea about this landscape he described in songs like The River. Somehow he sums up the American experience.

I saw Springsteen live with my dad in LA in 2000, and I was blown away. It was amazing to see him, a fiftysomething, dancing around and jumping on a piano. That's something to aim for.

Now, mister, the day the lottery I win I ain't ever gonna ride in no used car again

My sister works in the record industry and got me into Springsteen. The first album I had was Born in the USA. I like straightforward rock and roll that gets you going. That's what Springsteen does. He's in a great tradition of good rock musicians – the Who, the Stones – who make you want to stomp.

I've been puzzled by some of his more acoustic stuff, but his 2002 album The Rising did touch me – I chose the title track when I went on Desert Island Discs. I think he wrote it before 9/11, but it feels prophetic because it's about darkness and helping people out. It's very evocative.
I love Springsteen's music but not his politics. He made a mistake joining up with John Kerry. Musicians don't do themselves any favours when they enter the political arena. I like the fact that his songs have that protest element, but really Springsteen just needs to make good music.

Springsteen's songwriting and production and the way he approaches live shows put him in a different class. There was a lot of standing around looking meaningful with acoustic guitars in the '70s, and all those guys got swept away by punk, except Springsteen, who carried on through, and made some great albums in the late '70s.

A lot of my mates had The River, but it was Nebraska that really got me. It had that same stark, back-to-basics vibe that I was going for around that time. He has definitely had an effect on the way I write.

The first or second time I went to America, I saw him at Meadowlands in New Jersey, which is a huge sports arena, and he made it seem like a little local bar. He was so engaging. He's got that rock-and-roll showman thing going, but he's also plugged himself into the Woody Guthrie folk tradition, with The Ghost of Tom Joad, and now with The Seeger Sessions.

I met him when Woody Guthrie was inducted into the Rock & Roll Hall of Fame. We all did a gig, and Springsteen was top of the bill. What a lovely fella he was, and his love of Woody's work was tangible. He's always been aware of where the roots are.

Tonight my baby and me, we're gonna drive to the sea and wash these sins from our hands

'Born To Run: The Unseen Photos' from the archives of Eric Meola, is published in two editions, a hardback at £25 and a limited edition containing a signed print, at £125. The exhibition of the photographs at the Snap Gallery (01327 861091; www.snapgalleries.com) opens on Saturday.
Posted by jtf at 12:30 PM