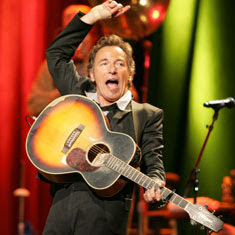 Explaining why he resurrected traditional folk tunes popularized by Pete Seeger, Bruce Springsteen cracks: "I'm an old guy. I can do whatever I want whenever I want, and I like doing it all."

The defiance that fueled 1975 breakthrough Born to Run also gave rise to We Shall Overcome: The Seeger Sessions, perhaps Springsteen's most surprising album yet. Few expected this plodding perfectionist, who labors over his handiwork for years in solitude, to serve up a ramshackle batch of covers recorded in three one-day sessions at a farmhouse with 13 players.

And those presuming the project was The Boss' spring break from his real job are discovering the depth of his commitment in the Seeger ensemble's enthralling live performances. After an emotional launch in New Orleans, the rambunctious Americana hoedown drew raves across Europe. In the UK, The Independent dubbed the concert "an astonishingly rich evening," while The Observer called it "an inspiring triumph." The newly launched U.S. leg is similarly wowing critics; a Washington Post reviewer declared Springsteen's ragtime orchestra "the best live show I've seen in at least five years."

The brief 18-date U.S. swing won't meet demand, so Springsteen is cherry-picking one song from each show for AOL Music (aolmusic.com), along with photos, set lists and recaps. Among on-demand videos so far are Erie Canal, Old Dan Tucker, O Mary Don't You Weep and John Henry. A full 18-tune set will be available when the tour ends June 25 in New Jersey.

Springsteen, 56, never set out to make an album of freewheeling folk music and socially conscious messages that dovetail with the current political climate.

"It happened so spontaneously," he says. "As I've gotten older, I tend to be more comfortable, and there's less second guessing. I'm always looking for another road to go down. I knew a good deal about Pete's work, but I hadn't steeped myself in it. In my late 20s, I went back to Hank Williams and Woody Guthrie and some early blues. I've continued to look into different types of music that gave birth to rock. In Pete's records, I found compelling music and characters, and I thought I could find these voices inside of me. Also, it was a release from my own writing. When you're released from your own style and sense of structure or what you're trying to convey, it allows a real free musical expression, which I hadn't had in a while."

The album, which entered Billboard at No. 3 and has sold 365,000 copies, scouts beyond the familiar protest tunes and refutes the notion that folk is feeble.

"I wanted it to be really raucous," Springsteen says. "Folk, in its essential element, is some of the rawest music ever made. I was interested in capturing some of that. Pete's thing could be so directly political, but I tried to get a balance of songs that had overt social implications, like Eyes on the Prize, a big freedom song from the civil rights era, and character studies, like Jesse James. It wasn't a conceptual project. It just happened and conceived itself over time."

The trick, he says, was finding a modern context for revived traditions, antique compositions and retro flavors of banjos, accordions, fiddles and washboards.

"I want to remember and yet forge ahead and find out what's over the next hill," he says. "A lot of this music was written so long ago, but I felt I could make it feel essential right now. I've always got an eye toward the future and an eye to the past. That's how you know where you've come from and where you want to go. If you look at our recent history, it seems there's been so much disregard of past experience in the way the country has conducted itself."

Though the album's politics are restrained, Springsteen has been increasingly vocal in his criticism of the Bush administration since joining 2004's Vote for Change tour. His solution to domestic ills?

"Obviously, get rid of the president," he says. "When you see the devastation (in New Orleans) and realize the kind of support the city will need to get back on its feet, there's no way to make sense of someone pushing for more tax cuts for the 1% of the 1% of the population. It's insanity and a subversion of everything America is supposed to be about. You can't travel around the city and not wonder what in the world is going on."

With midterm elections looming, that's probably not his last word on the subject. Nor will the Seeger tunes be his last whirl with history. He hopes to explore other areas of American and international folk music. He also has a roots-based solo project on the back burner.

And fret not, rock fans.

"I have a pretty good book of songs for the E Street Band," he says.

His longtime bandmates may discover their new Boss isn't the same as the old Boss. The fast and loose Seeger process taught Springsteen valuable lessons.

"It's fascinating to record a song when musicians don't know it," he says. "It's a powerful tool, especially with experienced musicians, in getting a certain spontaneity that you lose with too much rehearsal. If people learn their parts too well, they consciously perform rather than flat-out play. When you just launch into it, it breaks down another barrier between you and the audience. It's one less layer of formality. I like that a lot. I've done it with the E Street Band at times over the years, but never an entire record. We may try it."
Posted by jtf at 10:55 AM